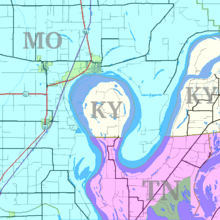 The Kentucky Bend, variously called the New Madrid Bend, Madrid Bend or Bessie Bend,[1] is an exclave of Fulton County, Kentucky, United States, encircled by the states of Tennessee and Missouri. It is a portion of a peninsula defined by an oxbow loop meander of the Mississippi River, and its inclusion in the state of Kentucky stems from uncertainties of the course of the Mississippi River when the boundary between Tennessee and Kentucky was established.

Kentucky Bend is the extreme southwestern corner of Kentucky. The peninsula includes the lowest point in the state of Kentucky, at the banks of the Mississippi River. The only highway into the area is Tennessee State Route 22, whose continuation into Kentucky Bend at one time was signed as Kentucky State Route 313.

As of the 2010 census, the population was 18 persons in this area, tabulated as the "Kentucky Bend County Census Division".[2] The mailing address of the area is Tiptonville, Tennessee, which lies to its south, although the nearest population center (and post office) is in the closer city of New Madrid, Missouri, across the river, to its north.

According to the U.S. Census Bureau, the Kentucky Bend covers a land area of 26.9 square miles (69.6 km2), of which 17.5 square miles (45.2 km2) is land and 9.4 square miles (24.4 km2), or 35.08%, is water.[2] The water area is primarily within the Mississippi River. Surveyors marking the boundary between Kentucky and Tennessee had only estimated where their line would meet the Mississippi; later, more detailed surveys revealed the location of this line to pass through north-south bends in the river, creating a division of the peninsula.[3] The western border of Kentucky is designated as the Mississippi River, as is the eastern border of Missouri—thus the creation of a "notch" for Kentucky, but not for Tennessee. 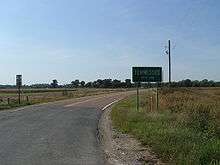 State line between the Kentucky Bend and Route 22 in Tennessee

The border predates the separation of Kentucky from Virginia and Tennessee from North Carolina. Its location stems from the Royal Colonial Boundary of 1665, which was meant to delimit overlapping inland claims of the Colony of Virginia and the Province of Carolina, respectively.

In 1812, this area of the river was highly disrupted and was reported to even flow backwards because of the 1811–1812 New Madrid series of earthquakes, some of the largest ever felt in the United States.[4]

The state of Tennessee contested the inclusion of the Kentucky Bend in the state of Kentucky, claiming it as part of Obion County until at least 1848, but Tennessee eventually dropped its claim.

This area of the Mississippi River, from just east at "Island Number Ten" around to the town of New Madrid, Missouri, was the site of a Civil War battle from February 28 to April 8, 1862, the Battle of Island Number Ten.

Due to its highly productive soil in the river's floodplain, Kentucky Bend was developed as a major cotton-producing area. The 1870 census recorded more than 300 residents. In The West Tennessee Farm edited by Marvin Downing (University of Tennessee at Martin Press, 1979), Norman L. Parks reports that in 1880 there was a population of 303, of whom 18 were African American. By 1900, there were "large numbers of Negroes in the Bend" working as laborers to plant and harvest the cotton. 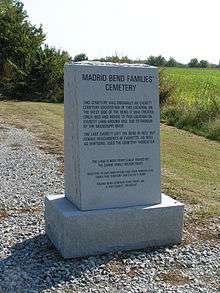 In Mark Twain's book Life on the Mississippi,[5] he described the six-decade-long feud between the Darnell and Watson families and other elements of life in the Bend.