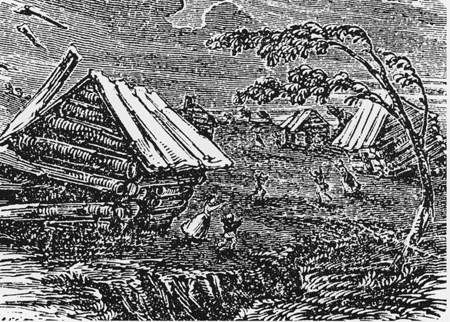 The Great Earthquake at New Madrid, a 19th-century woodcut from Devens' Our First Century (1877)

The 1811–12 New Madrid earthquakes were an intense intraplate earthquake series beginning with an initial earthquake of moment magnitude 7.5‑7.9 on December 16, 1811 followed by a moment magnitude 7.4 aftershock on the same day. They remain the most powerful earthquakes to hit the contiguous United States east of the Rocky Mountains in recorded history.[1][2][3] They, as well as the seismic zone of their occurrence, were named for the Mississippi River town of New Madrid, then part of the Louisiana Territory, now within Missouri.

The three earthquakes and their major aftershocks

Susan Hough, a seismologist of the United States Geological Survey (USGS), has estimated the earthquakes' magnitudes as around magnitude 7.[4]

After supper, we went to sleep as usual: about ten o'clock, and in the night I was awakened by the most tremendous noise, accompanied by an agitation of the boat so violent, that it appeared in danger of upsetting ... I could distinctly see the river as if agitated by a storm; and although the noise was inconceivably loud and terrific, I could distinctly hear the crash of falling trees, and the screaming of the wild fowl on the river, but found that the boat was still safe at her moorings.

By the time we could get to our fire, which was on a large flag in the stern of the boat, the shock had ceased; but immediately the perpendicular banks, both above and below us, began to fall into the river in such vast masses, as nearly to sink our boat by the swell they occasioned ... At day-light we had counted twenty-seven shocks.

On the 16th of December, 1811, about two o'clock, a.m., we were visited by a violent shock of an earthquake, accompanied by a very awful noise resembling loud but distant thunder, but more hoarse and vibrating, which was followed in a few minutes by the complete saturation of the atmosphere, with sulphurious vapor, causing total darkness. The screams of the affrighted inhabitants running to and fro, not knowing where to go, or what to do—the cries of the fowls and beasts of every species—the cracking of trees falling, and the roaring of the Mississippi— the current of which was retrograde for a few minutes, owing as is supposed, to an irruption in its bed— formed a scene truly horrible.

On the night of 16th November [sic], 1811, an earthquake occurred, that produced great consternation amongst the people. The centre of the violence was in New Madrid, Missouri, but the whole valley of the Mississippi was violently agitated. Our family all were sleeping in a log cabin, and my father leaped out of bed crying aloud "the Indians are on the house" ... We laughed at the mistake of my father, but soon found out it was worse than the Indians. Not one in the family knew at the time that it was an earthquake. The next morning another shock made us acquainted with it, so we decided it was an earthquake. The cattle came running home bellowing with fear, and all animals were terribly alarmed on the occasion. Our house cracked and quivered, so we were fearful it would fall to the ground. In the American Bottom many chimneys were thrown down, and the church bell in Cahokia sounded by the agitation of the building. It is said the shock of an earthquake was felt in Kaskaskia in 1804, but I did not perceive it. The shocks continued for years in Illinois, and some have experienced it this year, 1855.

The Shaker diarist Samuel Swan McClelland described the effects of the earthquake on the Shaker settlement at West Union (Busro), Indiana, where the earthquakes contributed to the temporary abandonment of the westernmost Shaker community.[8]

The underlying cause of the earthquakes is not well understood, but modern faulting seems to be related to an ancient geologic feature buried under the Mississippi River alluvial plain, known as the Reelfoot Rift. The New Madrid Seismic Zone (NMSZ) is made up of reactivated faults that formed when what is now North America began to split or rift apart during the breakup of the supercontinent Rodinia in the Neoproterozoic Era (about 750 million years ago). Faults were created along the rift and igneous rocks formed from magma that was being pushed towards the surface. The resulting rift system failed but has remained as an aulacogen (a scar or zone of weakness) deep underground. 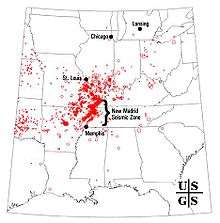 In recent decades minor earthquakes have continued.[9] The epicenters of over 4,000 earthquakes can be identified from seismic measurements taken since 1974. It can be seen that they originate from the seismic activity of the Reelfoot Rift. The zone which is colored in red on the map is called the New Madrid Seismic Zone. New forecasts estimate a 7 to 10 percent chance, in the next 50 years, of a repeat of a major earthquake like those that occurred in 1811–1812, which likely had magnitudes of between 7.6 and 8.0. There is a 25 to 40 percent chance, in a 50-year time span, of a magnitude 6.0 or greater earthquake.[10]

In a report filed in November 2008, the U.S. Federal Emergency Management Agency warned that a serious earthquake in the New Madrid Seismic Zone could result in "the highest economic losses due to a natural disaster in the United States," further predicting "widespread and catastrophic" damage across Alabama, Arkansas, Illinois, Indiana, Kentucky, Mississippi, Missouri, and particularly Tennessee, where a 7.7 magnitude quake or greater would cause damage to tens of thousands of structures affecting water distribution, transportation systems, and other vital infrastructure.[11]