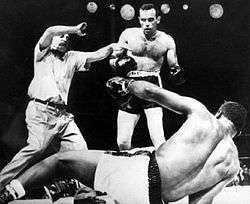 A knockout (abbreviated to KO or K.O.) is a fight-ending, winning criterion in several full-contact combat sports, such as boxing, kickboxing, muay thai, mixed martial arts, karate, some forms of taekwondo and other sports involving striking. A full knockout is considered any legal strike or combination thereof that renders an opponent unable to continue fighting.

The term is often associated with a sudden traumatic loss of consciousness caused by a physical blow. Single powerful blows to the head (particularly the jawline and temple) can produce a cerebral concussion or a carotid sinus reflex with syncope and cause a sudden, dramatic KO. Body blows, particularly the liver punch, can cause progressive, debilitating pain that can also result in a KO.

In boxing and kickboxing, a knockout is usually awarded when one participant falls to the canvas and is unable to rise to their feet within a specified period of time, typically because of exhaustion, pain, disorientation, or unconsciousness. For example, if a boxer is knocked down and is unable to continue the fight within a ten-second count, they are counted as having been knocked out and their opponent is awarded the KO victory.

In mixed martial arts (MMA) competitions, no time count is given after a knockdown, as the sport allows submission grappling as well as ground and pound. If a fighter loses consciousness ("goes limp") as a result of legal strikes it is declared a KO.[1] Even if the fighter loses consciousness for a brief moment and wakes up again to continue to fight, the fight is stopped and declared a KO.[2] As many MMA fights can take place on the mat rather than standing, it is possible to score a KO via ground and pound, a common victory for grapplers.

A technical knockout (TKO or T.K.O.), or stoppage, is declared when the referee or official ring physician decide that a fighter cannot safely continue the match. In boxing, for a KO to occur a fighter must fail to beat the count, so TKO refers to any situation when the referee, cornerman, physician, or fighter stops the fight any time during a round when there is no ten count, most notably when a fighter has been knocked down three times in one round, which ends the match in most regions.[3] The referee can stop the fight at any time if they feel a fighter cannot safely continue, for example if a fighter has been down once and isn't doing enough to defend themselves when they get back up. In boxing, if a fighter is knocked down and the referee stops the bout without a count, this also counts as TKO. However, TKO can only occur when the fight is stopped by the referee, mid round while the clock is running or between rounds when the clock is stopped. The exception is if a fight is stopped between rounds by a fighter's corner pulling him out or the fighter quitting, this counts as "referee technical decision" (RTD) which, like TKO, counts as a knockout in a boxer's record. In both boxing and MMA the referee declares TKO when a fighter is not intelligently defending himself while being repeatedly struck.[1] In amateur boxing, a knockout is scored as "referee stopped contest" (RSC), and a technical knockout ("outclassed") can also be declared if a fighter is behind by 15 points in a bout.

A technical knockout goes down as a knockout in a boxer's record, but as a TKO in an MMA fighter's record. 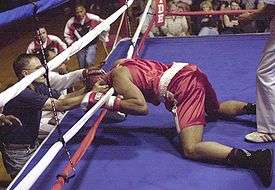 A knockout can be characterized by unconsciousness.

Little is known about what exactly causes one to be knocked unconscious, but many agree it is related to trauma to the brain stem. This usually happens when the head rotates sharply, often as a result of a strike. There are three general manifestations of such trauma:

A basic principle of boxing and other combat sports is to defend against this vulnerability by keeping both hands raised about the face and the chin tucked in.

A fighter who becomes unconscious from a strike with sufficient knockout power is referred to as having been knocked out or KO'd (kay-ode). Losing balance without losing consciousness is referred to as being knocked down ("down but not out"). Repeated blows to the head are known to gradually cause permanent brain damage. In severe cases this may cause strokes or paralysis. This loss of consciousness is commonly known as becoming "punch drunk" or "shot". Because of this, many physicians advise against sports involving knockouts.[4]

Fighters who lose by knockout (either by ten count or technical) are automatically suspended for 30 days, three months if it is the second knockout within three months, or one year if it is the third knockout within one year. In AIBA competition, this does not apply if a fighter who loses by a technical knockout is outclassed or when a fighter is behind more than 20 points (15 for junior levels) in any round except the final round. 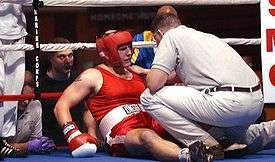 A boxer is knocked down and receives the 10 count.

A knockdown occurs when a fighter touches the floor of the ring with any part of the body other than the feet following a hit. The term is also used if the fighter is hanging on to the ropes, caught between the ropes, or is hanging over the ropes and is unable to fall to the floor and cannot protect himself. A knockdown triggers a count by the referee; if the fighter fails the count, then the fight is ended as a KO.[5]

A flash knockdown is a knockdown where the fighter hits the canvas but recovers quickly enough that a count is not started.[5]

Top 10 boxers by most KOs

Top 10 MMA fighters by most KOs

Fighters from inactive Pride Fighting Championships and active UFC/Bellator plus champions and former champions from other organizations.