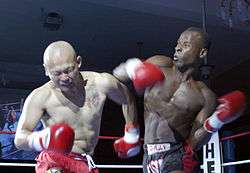 Strikes to the head can result in a knockout

Punching power is the amount of kinetic energy in a person's punches. Knockout power is a similar concept relating to the probability of any strike to the head to cause unconsciousness. Knockout power is related to the force delivered and precision of the strike.

Generally, there are five components to punching power that must be present for a puncher to be considered truly powerful: lack of arm punching, proper weight shifting, stepping during a punch, pivoting with a punch, and using proper footwork.[1]

This body connection requires the development of a strong core. The core is perhaps the most important element in a powerful punch, since it connects the powerhouse of the legs to the delivery system of the arms. Basic core conditioning exercises include abdominal crunches, situps and leg raises.[2]

This article is issued from Wikipedia - version of the 10/6/2015. The text is available under the Creative Commons Attribution/Share Alike but additional terms may apply for the media files.