This article is about a phenomenon in economics. For the neologism, see Korean Wave.

It is stated that the period of a wave ranges from forty to sixty years, the cycles consist of alternating intervals between high sectoral growth and intervals of relatively slow growth.[2]

The Soviet economist Nikolai Kondratiev (also written Kondratieff) was the first to bring these observations to international attention in his book The Major Economic Cycles (1925) alongside other works written in the same decade.[3][4] In 1939, Joseph Schumpeter suggested naming the cycles "Kondratieff waves" in his honor.

Two Dutch economists, Jacob van Gelderen and Salomon de Wolff, had previously argued for the existence of 50- to 60-year cycles in 1913.

Since the inception of the theory, various studies have expanded the range of possible cycles, finding longer or shorter cycles in the data. The Marxist scholar Ernest Mandel revived interest in long-wave theory with his 1964 essay predicting the end of the long boom after five years and in his Alfred Marshall lectures in 1979. However, in Mandel's theory, there are no long "cycles", only distinct epochs of faster and slower growth spanning 20–25 years.

The historian Eric Hobsbawm wrote of the theory: "That good predictions have proved possible on the basis of Kondratiev Long Waves—this is not very common in economics—has convinced many historians and even some economists that there is something in them, even if we don't know what." [5]

Characteristics of the cycle

Kondratiev identified three phases in the cycle: expansion, stagnation, and recession. More common today is the division into four periods with a turning point (collapse) between the first and second phases. Writing in the 1920s, Kondratiev proposed to apply the theory to the 19th century:

Explanations of the cycle

According to the innovation theory, these waves arise from the bunching of basic innovations that launch technological revolutions that in turn create leading industrial or commercial sectors. Kondratiev's ideas were taken up by Joseph Schumpeter in the 1930s. The theory hypothesized the existence of very long-run macroeconomic and price cycles, originally estimated to last 50–54 years.

In recent decades there has been considerable progress in historical economics and the history of technology, and numerous investigations of the relationship between technological innovation and economic cycles. Some of the works involving long cycle research and technology include Mensch (1979), Tylecote (1991), The International Institute for Applied Systems Analysis (IIASA) (Marchetti, Ayres), Freeman and Louçã (2001), Andrey Korotayev[6] and Carlota Perez.

Perez (2002) places the phases on a logistic or S curve, with the following labels: the beginning of a technological era as irruption, the ascent as frenzy, the rapid build out as synergy and the completion as maturity.[7]

Because people have fairly typical spending patterns through their life cycle, such as spending on schooling, marriage, first car purchase, first home purchase, upgrade home purchase, maximum earnings period, maximum retirement savings and retirement, demographic anomalies such as baby booms and busts exert a rather predictable influence on the economy over a long time period. Harry Dent has written extensively on demographics and economic cycles. Tylecote (1991) devoted a chapter to demographics and the long cycle.[8]

Georgists, such as Mason Gaffney, Fred Foldvary, and Fred Harrison argue that land speculation is the driving force behind the boom and bust cycle. Land is a finite resource which is necessary for all production, and they claim that because exclusive usage rights are traded around, this creates speculative bubbles, which can be exacerbated by overzealous borrowing and lending. As early as 1997, a number of Georgists predicted that the next crash would come in 2008.[9][10]

Debt deflation is a theory of economic cycles, which holds that recessions and depressions are due to the overall level of debt shrinking (deflating): the credit cycle is the cause of the economic cycle.

There are several modern timing versions of the cycle although most are based on either of two causes: one on technology and the other on the credit cycle.

Additionally, there are several versions of the technological cycles, and they are best interpreted using diffusion curves of leading industries. For example, railways only started in the 1830s, with steady growth for the next 45 years. It was after Bessemer steel was introduced that railroads had their highest growth rates; however, this period is usually labeled the "age of steel". Measured by value added, the leading industry in the U.S. from 1880 to 1920 was machinery, followed by iron and steel.[13]

The technological cycles can be labeled as follows:

Any influence of technology during the cycle that began in the Industrial Revolution pertains mainly to England. The U.S. was a commodity producer and was more influenced by agricultural commodity prices. There was a commodity price cycle based on increasing consumption causing tight supplies and rising prices. That allowed new land to the west to be purchased and after four or five years to be cleared and be in production, driving down prices and causing a depression, as in 1819 and 1839.[14] By the 1850s the U. S. was becoming industrialized.[15]

Several papers on the relationship between technology and the economy were written by researchers at the International Institute for Applied Systems Analysis (IIASA). A concise version of Kondratiev cycles can be found in the work of Robert Ayres (1989) in which he gives a historical overview of the relationships of the most significant technologies.[16] Cesare Marchetti published on Kondretiev waves and on the diffusion of innovations.[17][18] Arnulf Grübler’s book (1990) gives a detailed account of the diffusion of infrastructures including canals, railroads, highways and airlines, with findings that the principal infrastructures have midpoints spaced in time corresponding to 55 year K wavelengths, with railroads and highways taking almost a century to complete. Grübler devotes a chapter to the long economic wave.  [19] Giancarlo Pallavicini public in 1996 the ratio between the long Kondratiev wave and information technology and communication.[20]

Korotayev et al. recently employed spectral analysis and claimed that it confirmed the presence of Kondratiev waves in the world GDP dynamics at an acceptable level of statistical significance.[2][21] Korotayev et al. also detected shorter business cycles, dating the Kuznets to about 17 years and calling it the third harmonic of the Kondratiev, meaning that there are three Kuznets cycles per Kondratiev.

Leo A. Nefiodow shows that the fifth Kondratieff ended with the global economic crisis of 2000-2003, while the new, sixth Kondratieff started simultaneously.[22] According to Leo A. Nefiodow the carrier of this new long cycle will be health in a holistic sense- including its physical, psychological, mental, social, ecological and spiritual aspects; the basic innovations of the sixth Kondratieff are "psychosocial health" and "biotechnology".[23]

More recently the physicist and systems scientist Tessaleno Devezas advanced a causal model for the long wave phenomenon based on a generation-learning model[24] and a nonlinear dynamic behaviour of information systems.[25] In both works a complete theory is presented containing not only the explanation for the existence of K-Waves, but also and for the first time an explanation for the timing of a K-Wave (≈60 years = two generations).

A specific modification of the theory of Kondratieff cycles was developed by Daniel Šmihula. Šmihula identified six long-waves within modern society and the capitalist economy, each of which was initiated by a specific technological revolution:[26]

Unlike Kondratieff and Schumpeter, Šmihula believed that each new cycle is shorter than its predecessor. His main stress is put on technological progress and new technologies as decisive factors of any long-time economic development. Each of these waves has its innovation phase, which is described as a technological revolution and an application phase in which the number of revolutionary innovations falls and attention focuses on exploiting and extending existing innovations. As soon as an innovation or a series of innovations becomes available, it becomes more efficient to invest in its adoption, extension and use than in creating new innovations. Each wave of technological innovations can be characterized by the area in which the most revolutionary changes took place ("leading sectors").

Every wave of innovations lasts approximately until the profits from the new innovation or sector fall to the level of other, older, more traditional sectors. It is a situation when the new technology, which originally increased a capacity to utilize new sources from nature, reached its limits and it is not possible to overcome this limit without an application of another new technology.

For the end of an application phase of any wave there are typical an economic crisis and stagnation. The economic crisis in 2007–2010 is a result of the coming end of the "wave of the Information and telecommunications technological revolution". Some authors have started to predict what the sixth wave might be, such as James Bradfield Moody and Bianca Nogrady who forecast that it will be driven by resource efficiency and clean technology.[27] On the other hand, Šmihula himself considers the waves of technological innovations during the modern age (after 1600 AD) only as a part of a much longer „chain“ of technological revolutions going back to the pre-modern era.[28] It means he believes that we can find long economic cycles (analogical to Kondratiev cycles in modern economy) dependent on technological revolutions even in the Middle Ages and the Ancient era. 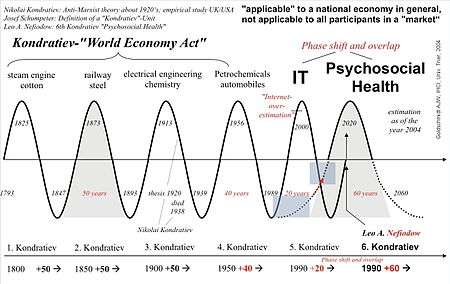 Kondratiev waves associated with gains in IT and health with phase shift and overlap, Andreas J. W. Goldschmidt, 2004

Long wave theory is not accepted by many academic economists, but it is important for innovation-based, development, and evolutionary economics. Among economists who accept it, there has been no universal agreement about the start and the end years of particular waves. This points to a major criticism of the theory: that it amounts to seeing patterns in a mass of statistics that aren't really there.

Moreover, there is a lack of agreement over the cause of this phenomenon. Health economist and biostatistician Andreas J. W. Goldschmidt searched for patterns and proposed that there is a phase shift and overlap of the so-called Kondratiev cycles of IT and health (shown in the figure). He argued that historical growth phases in combination with key technologies does not necessarily imply the existence of regular cycles in general. Goldschmidt is of the opinion that different fundamental innovations and their economic stimuli do not exclude each other, they mostly vary in length, and their benefit is not applicable to all participants in a "market.“ [29]