This article is about the hip-hop duo. For the other American singer-songwriter, see Christopher Cross.

Kris Kross was an American hip hop duo formed in the early 1990s and consisting of Chris "Mac Daddy" Kelly and Chris "Daddy Mac" Smith. The duo hit worldwide status with their smash 1992 hit, "Jump", which topped the Billboard Hot 100 for eight weeks and was certified double platinum as a single. The duo released three albums, their debut one Totally Krossed Out topping the US Billboard 200 while their following, Da Bomb and Young, Rich & Dangerous making it into the Top 20. The duo were also noted for their fashion style as they would wear their clothes backwards. 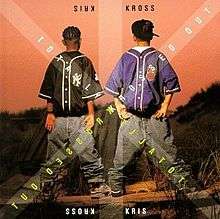 Cover art for Totally Krossed Out, the debut album of Kris Kross. Kelly on the left, Smith on the right.

Along with Dupri, the two signed a deal with Ruffhouse Records and recorded their debut album Totally Krossed Out (1992). Entirely produced by Dupri, Totally Krossed Out was released March 31 that year and sold four million copies in the U.S. It included the hit single "Jump", which topped the Billboard Hot 100 for eight weeks, "becoming the first rap song to have achieved so long a run at the top. No other rap song had led the chart for that length of time."[3]

The music videos from the album also experienced major success. The video for "Jump", directed by filmmaker Rich Murray, went to No. 1 on MTV and sold over 100,000 copies as a VHS video single. The video for their follow-up single, "Warm It Up", also directed by Murray, won a Billboard video award for "Best New Artist", and got to No. 14 the same year as “Jump”. Writes The New York Daily News' Jim Farber: "Together, that was enough to propel the duo’s debut, 'Totally Krossed Out', to multi-platinum status."[3]

The duo landed a spot on Michael Jackson's 1992 European Dangerous World Tour as well as a cameo appearance on Jackson's music video for his 1991 single "Jam". Additionally, they made appearances in the music videos for Run-D.M.C.'s "Down with the King" (1993) and TLC's "Hat 2 Da Back" (1992), and they were featured in an episode of A Different World and as the closing musical act on the May 29, 1992 episode of In Living Color.

A video game starring the pair, titled Kris Kross: Make My Video, was released in 1992 on the Sega CD system. It consisted of the player's editing together the group's music videos for a few of their hit songs—using portions of the original music videos, stock footage, and general video animation effects. Players were prompted before each editing session to make sure to have certain footage compiled into the video. The game was released only in the United States to poor sales figures and dismal reviews. It was ranked 18th on Electronic Gaming Monthly's list of the "20 Worst Games of All Time".[4] Kris Kross made a cameo appearance in Ted Demme's film Who's the Man? (1993), which starred rapper Ed Lover and radio personality Doctor Dré of Yo! MTV Raps fame.

The duo's second album, Da Bomb (1993), was certified platinum and spawned the hits "Alright" featuring Super Cat, "I'm Real", and "Da Bomb" featuring Da Brat, whom Smith has discovered. Most of their songs had been directed at rivals Da Youngstas, Illegal, and Another Bad Creation.

A third album, Young, Rich & Dangerous, was released in early 1996 and was certified gold. It spawned the two hits "Tonite's tha Night" and "Live and Die for Hip Hop".

Judgement Records is a record label, started by Joe Nicolo in 1999 after Ruffhouse Records was dissolved. Kris Kross followed Nicolo to his new label and recorded their 25 tracked fourth album in 2000-2001. The album was never released.

Kris Kross' last performance was in their hometown at the Fox Theatre for So So Def's 20th Anniversary concert in 2013.[5]

Kris Kross was the youngest rap duo to gain success, with gold and platinum albums, at 11 and 12 years old. They have been referenced on the albums or songs of Dr. Dre, 2Pac, Method Man and many more.

Urbane Muse is an online site with a focus in art, music and film. This site showcases a selection of works by Smith. Urbane Muse Magazine aims to cover art, music, design, film, culture and more. Founded by Smith to present his projects, paintings, exhibitions, writings, other works and research. 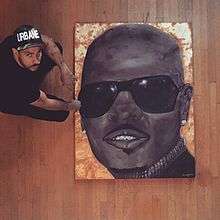 On May 1, 2013, Chris Kelly was found unconscious in his Atlanta home. He was pronounced dead around 5 p.m. on the south campus of the Atlanta Medical Center; he was 34 years old.[6][7][8] According to the police report documents, Kelly had been brought home to recover from his drug use, as he had done several times in the past. His uncle told police that Kelly "had an extensive history of drug abuse."[9][10] The following day, Dupri tweeted a "letter to fans", in which he referred to Kelly as "a son I never had", and praised Kelly as an artist. Numerous other artists and fans publicly acknowledged Kelly's death, some citing Kris Kross or Kelly as their inspiration or their reason for entering the music industry. On July 1, a toxicology report was released stating that Kelly died from a drug overdose. According to the Fulton County Medical Examiner Office, the toxicology screening shows that Kelly had a mixture of drugs in his system, including cocaine and heroin.[11]