Vogel was born in Leninskoye, a district of Bishkek, the capital of Kyrgyzstan, and moved to Germany with her parents when she was six months old.[1] In 2007 and 2008 she competed at the Junior European and World Championships and became a six-time junior world champion and two-time junior European champion. 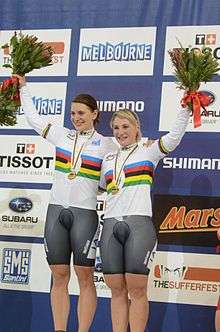 At the 2012 UCI Track Cycling World Championships in Melbourne, Vogel and Welte won the gold medal in the team sprint. They set a world record in qualifying which they broke again in the final.[3] Vogel and Welte would go on to win the first ever Olympic gold medal in women's team sprint later that year in London, benefiting from competitors being relegated in both the semifinal and final.

In addition to her track cycling career, Vogel also works as a part-time police officer.[1][2]