Becky James of Great Britain, debuting at this level, won four medals, including two gold, in a single Championships, the first British cyclist to do so. Sarah Hammer of the United States also won two gold medals from two events, as did Stefan Bötticher of Germany and Michael Hepburn of Australia.

Martyn Irvine of Ireland broke a 116 year wait for a male Irish track medal with silver in the individual pursuit, only to return an hour later to take Ireland's first ever track gold medal in the Scratch race. Laura Trott suffered her first major senior track defeat, taking silver in the Omnium behind Hammer, but she retained for a third time her Team Pursuit title with Dani King and debutant and World Junior Road Time Trial champion Elinor Barker. 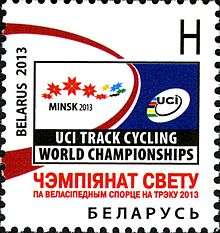 Stamp from Belarus from the event