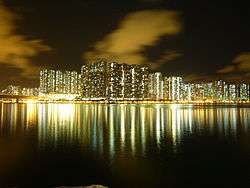 Villa Esplanada at the center, Martime Square and Tsing Yi Bridge (North) on the left

Kwai Tsing (Chinese: 葵青區; Cantonese IPA: [kʰwɐi11 tsɪŋ55 kʰɵy55]; Hong Kong Hakka: kwi2 Ciang1 ki1; Putonghua Pinyin: Kuíqīng Qū) is one of the 18 districts of Hong Kong. It consists of two parts - Kwai Chung and Tsing Yi Island. Kwai Tsing is part of the New Territories. It had a population of 477,092 in 2001. The district has the third least educated residents and their income is below average.

Kwai Tsing did not exist as a standalone district when Hong Kong's District Boards were formed in the early 1980s. It remained as a part of Tsuen Wan district until 1985. The newly created district was known as Kwai Chung and Tsing Yi District (葵涌及青衣區) until 1988, when its name was shortened to Kwai Tsing District.

The internationally famous container terminals can be found within the district, along the shores of Rambler Channel between Kwai Chung and Tsing Yi Island. The Tsing Ma Bridge, leading to the Hong Kong International Airport through the North Lantau Highway, starts at the northwestern end of Tsing Yi Island.

Over 75% of the district residents live in public housing.

During the eighth year of Emperor Kangxi (1669), the Qing Government forced the Hong Kong and the coastal regions such as Guangdong, Guangxi, Fujian, etc., to move to the inland areas of mainland China. After this move inland policy ceased, a large number of Hakka people in this period China moved to the new County and southeast coastal areas. Kwai Tsing District is traditionally speak Hakka areas, because the original inhabitants of the villages in this area mainly in Hakka Family. "Kwai" was first seen in a Ming Guo fei compiled the "big mind Guangdong, Guangdong coastal map" within the same diagram "Kwai" next to the name of an island "spring flowers", now there is a south-east Tsing Yi Island small mountain known as spring flowers, believes that "spring flowers" is the ancient name "Tsing" is. "Territories village official Fu Company" Qing Dynasty Emperor Kangxi compiled by Wang Tsung-hee "in Xin'an County Metropolitan" in the records there, "Chung child" and "Tsing Yi".

Industry is an integral part of the district. Both light and heavy industries share substantial land in the district.

Like other early new towns of Hong Kong, the district was primary for settling the influx of Chinese population around the year of the change of sovereignty in China in 1949 and the baby boom afterwards. Public housing estates were built throughout the district. Many schools have been established by various charities and religious organisations. Some have provided vocational training for industries in Hong Kong while some have become liberal schools. As the community has aged, the number of school children declined after the 2000s, and schools are facing survival problems.

The usual forms of transportation in the district are buses, minibuses and metro.

The MTR (metro) Tsuen Wan Line has four stations on three lines running through the district:

There are several sports grounds in the district. Biu Chun Rangers are based in Tsing Yi. Kwai Tsing Theatre in Kwai Fong is gradually becoming an important performance venue in Hong Kong.