This article is about an urban area in Hong Kong. For other uses, see Kowloon (disambiguation). 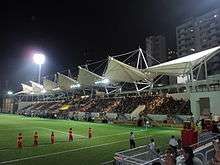 The Mong Kok Stadium, which holds the Hong Kong Premier League, has a capacity of 6,769. It is currently the biggest stadium in Kowloon.

Kowloon (/ˌkaʊˈluːn/; Chinese: 九龍; Sidney Lau: gau2lung4) is an urban area in Hong Kong comprising the Kowloon Peninsula and New Kowloon. It is bordered by the Lei Yue Mun strait to the east, Mei Foo Sun Chuen and Stonecutter's Island to the west, a mountain range, including Tate's Cairn and Lion Rock to the north, and Victoria Harbour to the south. It had a population of 2,019,533 and a population density of 43,033/km2 in 2006. The peninsula's area is approximately 47 km2 (18 sq mi). 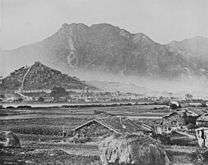 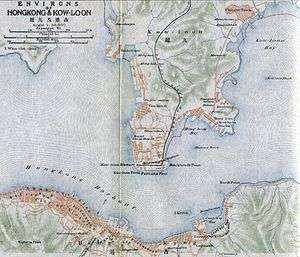 The name Kowloon stems from the term Nine Dragons, which refers to eight mountains and a Chinese emperor: Kowloon Peak, Tung Shan, Tate's Cairn, Temple Hill, Unicorn Ridge, Lion Rock, Beacon Hill, Crow's Nest and Emperor Bing of Song.[1] The part of Kowloon south of Boundary Street, together with Stonecutters Island, was ceded by Qing China to the United Kingdom under the Convention of Peking of 1860. For many years the area remained largely undeveloped, used by the British mainly for tiger-hunting expeditions.[2] The part of Kowloon north of Boundary Street (New Kowloon) was leased by the British as part of the New Territories under the 1898 Second Convention of Peking for 99 years. Within New Kowloon is Kowloon City, which refers to an area of Hong Kong where the Kowloon Walled City used to be located. The Kowloon Walled City itself was demolished in 1993. The same area was called Guanfuchang (官富場) during the Song dynasty (960–1279). Statutorily, "Kowloon" is used to refer to the area south of Boundary Street and the Stonecutters Island. "New Kowloon" has also remained part of the New Territories.

In modern-day culture, New Kowloon is not regarded as part of the New Territories but as an integral part of the Kowloon urban area whether north or south of Boundary Street.

Large-scale development of Kowloon began in the early-20th century, with the construction of the Kowloon-Canton Railway and the Kowloon Wharf, but because of Kowloon's close proximity to Kai Tak Airport, building construction was limited by flight paths. As a result, compared to Hong Kong Island, Kowloon has a much lower skyline.[1] After World War II, Kowloon became extremely congested when slums for refugees from the newly established China gave way to public housing estates, mixed with private residential, commercial and industrial areas.

The area of reclaimed land known as West Kowloon was once home to a dockyard for the Royal Navy.