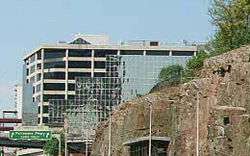 Kwasha Lipton was an employee benefits consulting firm located in Fort Lee, New Jersey. It was founded in 1944 by H. Charles "Chick" Kwasha and Maurice Lipton.

Kwasha Lipton is best known for creating a special type of defined benefit pension plan called a cash balance plan, which it designed for the employees of Bank of America in 1985. Kwasha Lipton implemented dozens of cash balance plans for its other clients, and these plans were ultimately adopted by various companies throughout the United States. Some employees allege that the plans discriminate against older workers in violation of federal age discrimination law because of the way in which younger and older employees earn benefits under cash balance plans. Many cases found plan sponsors liable most were later reversed by appellate courts. However to retroactively approve the plan Congress enacted the Pension Protection Act of 2006.[1][2] This settled whether the cash balance plan created ab initio violated age discrimination, however plan conversions which created cash balance plans out of existing traditional pensions by freezing accruals of older workers is still an unsettled issue.

Kwasha Lipton owned and occupied a famous building in Fort Lee, New Jersey. It is the first office building visible to the North after passing from New York City to New Jersey across the George Washington Bridge, and it offers spectacular views of the bridge and the Manhattan skyline. The 13-story building has 139,000 square feet (12,900 m2) of office space, and was sold in July 2005 for $33.7 million. ACS remains the primary occupant leasing the building.