Lake Como (Lago di Como [ˈlaːɡo di ˈkɔːmo] or locally [ˈlaːɡo di ˈkoːmo] in Italian, also known as Lario [ˈlaːrjo], after the Latin name of the lake; Lach de Comm[2] in Lombard; Latin: Larius Lacus) is a lake of glacial origin in Lombardy, Italy. It has an area of 146 square kilometres (56 sq mi), making it the third-largest lake in Italy, after Lake Garda and Lake Maggiore. At over 400 metres (1,300 feet) deep, it is one of the deepest lakes in Europe, and the bottom of the lake is more than 200 metres (660 ft) below sea level.

Lake Como has been a popular retreat for aristocrats and wealthy people since Roman times, and a very popular tourist attraction with many artistic and cultural gems. It has many villas and palaces (such as Villa Olmo, Villa Serbelloni, and Villa Carlotta). Many famous people have or have had homes on the shores of Lake Como, such as Matthew Bellamy, John Kerry, Madonna, George Clooney,[3] Gianni Versace, Ronaldinho, Sylvester Stallone, Julian Lennon, Richard Branson, Ben Spies, and Pierina Legnani.

The lake's name in Latin is Larius, Italianised as Lario, but this name is rarely used; it is usually called Lago di Como (literally "lake of Como"). In guidebooks the lake may be variously referred to as Lake Como, Lake of Como, or Como Lake. Its name comes from the city of Como, known to the Romans as Comum.

While the town of Como is referred to as Como, the lake is never referred to solely by this name. This is not true of another lake in Italy, Lake Garda, where Garda may refer to either the town fronting the lake, or the lake.

The lake is shaped much like an inverted letter "Y". The northern branch begins at the town of Colico, while the towns of Como and Lecco sit at the ends of the southwestern and southeastern branches respectively. The small towns of Bellagio, Menaggio and Lierna are situated at the intersection of the three branches of the lake: a triangular boat service operates between them. The Lierna area is an historical charming site of the lake with a white beach and a famous castle.

Lake Como is fed primarily by the Adda River, which enters the lake near Colico and flows out at Lecco. This geological conformation makes the southwestern branch a dead end, and so Como, unlike Lecco, is often flooded.

The mountainous pre-alpine territory between the two southern arms of the lake (between Como, Bellagio, and Lecco) is known as the Larian Triangle,[4] or Triangolo lariano. The source of the river Lambro is here. At the centre of the triangle, the town of Canzo is the seat of the Comunità montana del Triangolo lariano, an association of the 31 municipalities that represent the 71,000 inhabitants of the area.

Lake Como weather is generally mild. It is known for its Mediterranean-like climate where sub-tropical plants can grow year-round. In the winter, the lake helps to maintain a higher temperature in the surrounding region. Average daily temperatures range from about 3.7 °C (39 °F) in January to 23.4 °C (74 °F) in July, according to historical weather data from Como.[5] Water temperatures can reach an average of 24 °C (75 °F) during the month of July. Snowfall is erratic and primarily affects the higher elevations. Rainfall is heaviest in May and lowest during the winter months.

As a tourist destination, Lake Como is popular for its landscapes, wildlife, and spas.[6] It is a venue for sailing, windsurfing, and kitesurfing.[7] In 1818 Percy Bysshe Shelley wrote to Thomas Love Peacock: "This lake exceeds anything I ever beheld in beauty, with the exception of the arbutus islands of Killarney. It is long and narrow, and has the appearance of a mighty river winding among the mountains and the forests".[8]

In the area surrounding Lake Como there are several farms which produce goods such as honey, olive oil, cheese, milk, eggs and salamis. One can find lists of these farms and typically visit the farm itself in person to make their purchases.[9] 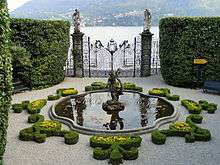 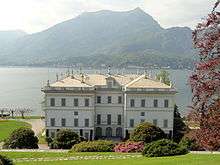 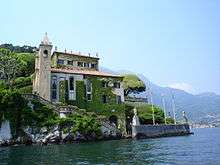 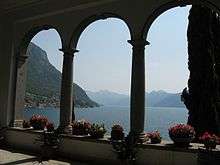 The lake is well known for the attractive villas that have been built there since Roman times, when Pliny the Younger built the Comedia and the Tragedia resorts. Many villas on the lake shores have admirable gardens that benefit from the mild climate induced by the stabilising presence of 22.5 km³ of lake water and are fit to host tropical plants.

Villa Carlotta was built for the Milanese Marquis Giorgio Clerici in 1690 and occupies a site of over 7 ha (17 acres) at Tremezzo, facing the Bellagio peninsula. An Italian garden (with steps, fountains, and sculptures) was laid out at the same time. The villa was later sold to powerful banker and Napoleonic politician Giovanni Battista Sommariva. Stendhal was his guest in 1818, and his visit is recalled at the start of La Chartreuse de Parme. In 1843 it was purchased by Princess Marianne of Nassau as a wedding present for her daughter Carlotta, after whom the villa is now named. The latter, together with her husband Georg II of Saxen-Meiningen, laid out the woodland landscape park in Romantic style. The villa today includes a museum of agricultural implements as well as important works of sculpture by Sommariva’s friend Antonio Canova and by Luigi Acquisti.[10]

Villa d'Este, in Cernobbio, was built in 1568 by Cardinal Tolomeo Gallio, a native of the town. In 1816–1817 the villa was home to Caroline of Brunswick, estranged wife of the Prince of Wales and shortly to become Queen Consort of King George IV of the United Kingdom. The landscaped gardens in the English style are a product of this period. Later in the century it was turned into a luxury hotel. Today the Villa d’Este is known for attracting celebrity guests.

Villa del Balbianello, famous for its elaborate terraced gardens, lies on a promontory of the western shore of the lake near Isola Comacina. Built in 1787 on the site of a Franciscan monastery, it was the final home of the explorer Guido Monzino and today houses a museum devoted to his work.

Villa Melzi d'Eril in Bellagio was built in neo-classical style by architect Giocondo Albertolli in 1808–10 as the summer residence of Duke Francesco Melzi d'Eril, who was vice-president of the Napoleonic Italian Republic. The park includes an orangery, a private chapel, fine statues, and a Japanese garden, and is planted, as often on lake Como, with huge rhododendrons. 19th-century guests at the Villa included Stendhal and Franz Liszt.[11]

Villa Serbelloni, also in Bellagio, hosts the Rockefeller Foundation Bellagio Center, a 50-acre (200,000 m2) international conference center set up and managed by the Rockefeller Foundation since 1959, which also operates a "scholar-in-residence" program for scholars from around the world. This is believed to have been the site of Pliny the Younger’s villa "Tragedia". Its well-known park was created at the end of the 18th century by Alessandro Serbelloni.

The Lake Como ferry service is a highly developed public transport system linking the many small towns around the Lake. A motorized service began in 1826 when a steamship with sails, the “Lario”, was launched by the newly established Società privilegiata per l'impresa dei battelli a vapore nel Regno Lombardo Veneto. Since 1952 the system has been run under the auspices of a government organization called first the Gestione Commissariale Governativa and subsequently the Gestione Governativa Navigazione Laghi, which is also responsible for services on Lake Maggiore and Lake Garda.[12][13]

Today there are three main services:

The lake boat Concordia and the car ferry Plinio. 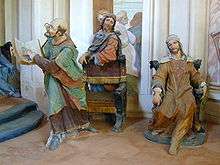 Chapel 5 of Sacro Monte di Ossuccio. Disputation with the Doctors

The Sacro Monte di Ossuccio ("Holy Mount of Ossuccio") is a sanctuary located on a hillside slope between olive groves and woods along the western edge of Lake Como facing Isola Comacina. Fifteen Baroque inspired chapels, built between 1635 and 1710, and dedicated to the Mysteries of the Rosary are dotted along the way that leads to the Monastery. This building is the last in the chain and is dedicated to the Coronation of the Virgin.

In 2003, the Sacri Monti of Piedmont and Lombardy, including that of Ossuccio, were added by UNESCO to the World Heritage List.

Villages, resorts, and other remarkable localities near the lake

The Parco Meier, a public garden at Tremezzo 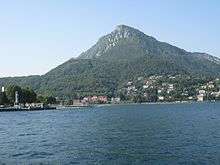 Lake Como is the setting of the annual Classic cycling race, the Giro di Lombardia (Tour of Lombardy).

Lake Como seen from Villa Carlotta in Tremezzo, near the centre of the lake.

Lake Como seen from the city of Como.

View of Lecco and the Lake of Como, branch of Lecco, from "Ciresa plain" on Mt. Barro.

Shoreline of Como from inside Lake Como