Lake Lugano (Italian: Lago di Lugano or Ceresio, from Ceresius lacus) is a glacial lake which is situated on the border between southern Switzerland and northern Italy. The lake, named after the city of Lugano, is situated between Lake Como and Lago Maggiore. It was cited for the first time by Gregory of Tours in 590 with the name Ceresio,[1] a name which is said to have derived from the Latin word cerasus, meaning cherry, and refers to the abundance of cherry trees which at one time adorned the shores of the lake.[2] The lake appears in documents in 804 under the name Laco Luanasco.[1]

Well-known mountains and tourist destinations on the shores of the lake are Monte Brè to the east, Monte San Salvatore west of Lugano, and Monte Generoso on the south-east shore. The World Heritage Site Monte San Giorgio is situated south of the lake.

The first certain testimony of a political body governing the shores of the lake is from 818. Occupying an area of strategic importance, the lake was then part of the feudal dominion of the County of Sperio. Circa 1000, it came under the control of the Bishop of Como. The region was the site of the war between Como and Milan over control of Alpine traffic from 1218 to 1227. As the lake and its shores became progressively incorporated into the Duchy of Milan they became the subject of political and territorial contention during the 15th century, and Lugano became the lake's main town.[1]

The lake definitively ceased to belong to a single sovereign political entity following the establishment of the transalpine bailiwicks of the Swiss cantons at the beginning of the 16th century. The Italian-Swiss border was fixed in 1752 by the Treaty of Varese, and has since remained virtually unchanged.[1]

In 1848, the Melide causeway was built on a moraine between Melide and Bissone, in order to carry a road across the lake and provide a direct connection between Lugano and Chiasso. Today the causeway also carries the Gotthard railway and the A2 motorway. 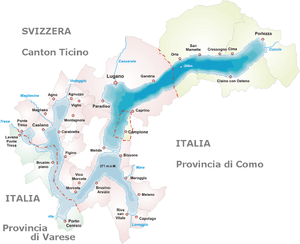 Map of the lake

Lake Lugano with the Melide causeway 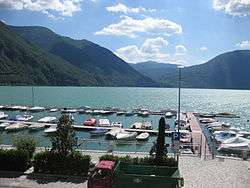 Porlezza, at the head of the lake in Italy

The Italian exclave of Campione d'Italia and parts of the waters of the lake are considered by European Customs Law as non-territorial for fiscal purposes and as such enjoy a special tax status as a duty-free area, exemption from EU VAT [5] and offer residents other advantageous tax privileges.

Places on the lake in Switzerland (CH) and in Italy (I) include (from Lugano, clockwise): 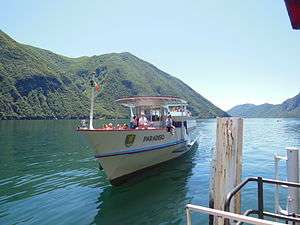 One of SNL's passenger boats arriving at Gandria

The lake is navigable, and used by a considerable number of private vessels. Passenger boats of the Società Navigazione del Lago di Lugano (SNL) provide services on the lake, principally for tourist purposes, but also connecting Lugano with other lakeside communities, some of which have no road access.

Fishery in the lake (and Lake Maggiore) is regulated by a 1986 agreement between Switzerland and Italy. The current agreement on navigation dates from 1992.

Pollution has long been a problem in Lake Lugano. In the 1960s and 1970s it was officially forbidden to bathe in the lake.[6] Despite the continued introduction of sewage treatment plants such as in Gandria, factors such as lake retention time and lack of oxygen and increasing phosphorus concentrations means it is unclear if the lake will recover.

The Federal Office for the Environment's last published report on Lake Lugano dates from 1995.[7] To summarise that report:

The Swiss-Italian organisation CIPAIS in its most recent published report[8] says:

Considering the results obtained in 2009 it can be affirmed that, notwithstanding the observed improvement, Lake Lugano is still in a state of high eutrophication, the highest among Swiss lakes.

The Italian environmental group Legambiente, in its 2007 study of all northern Italian lakes,[9][10] found Lake Lugano to be the most polluted of all.

All water samples were well beyond the legal limits. The polluted sites should not be bathed in for health reasons. Bacteria can cause in the worst case, skin infections, diarrhoea and vomiting.

According to Legambiente, the only reason swimming was not banned on the Italian Lakes was because the state of Lombardy changed the law. They state that pollution levels in the lakes do not conform to European rulings and the lack of sewage treatment is illegal. 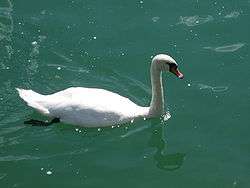 The lake is full of fish. Apart from a few protected areas, such as the mouth of the River Cuccio in Porlezza, fishing is allowed anywhere, although according to various regulations. Protected species are the bleak and the white clawed crayfish (Austropotamobius pallipes). The bleak is almost extinct here, unlike in Lago Maggiore, and planning is under way for the controlled repopulation of the lake, particularly around Ponte Tresa.

In 1895 the brook trout was introduced from Lake Zug, while between 1894 and 1897 the common whitefish was introduced. Since 1950 attempts have been made to introduce the whitefish Coregonus macrophthalmus from Lake Neuchâtel, but it has not established itself effectively.

The Common Roach is present in large numbers and took around ten years to colonise the entire lake, thereby replacing the bleak. Still present are the European chub, tench, carp and a few examples of European perch, largemouth bass, zander and burbot. Recently the wels catfish has also been spotted, and the pigo has also been spotted too.

The whole area behind the southern shores of Lake Lugano is rich in fossils. The focal point of these fossil deposits is Monte San Giorgio, where since the 19th century many fossils have been found dating from the mid-Triassic (around 220 million years ago). The deposits on Monte San Giorgio stretch towards the west into Italian territory and the deposits of Besano. Fossils dating from the early Jurassic (around 180 million years ago) have also been found along the southern shores but more towards the east and Osteno.

View of Lake Lugano from Monte San Salvatore, with Lugano to the left and the Melide causeway to the right