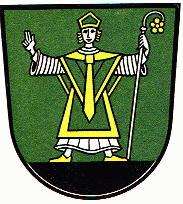 The coat-of-arms with the patron saint, Saint Nicholas in bishops robes 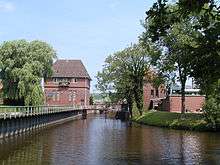 The Otterndorf Sluice and its pumping station. Right: the diesel pumphouse, left: the electric pumphouse. 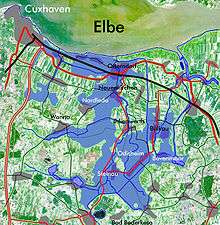 Land flooded by a 'small' storm surge of only 4.50 m when a dyke broke at Glameyer Stack, Otterndorf.

Land Hadeln is a historic landscape and former administrative district in Northern Germany with its seat in Otterndorf on the Lower Elbe, the lower reaches of the River Elbe, in the Elbe-Weser Triangle between the estuaries of the Elbe and Weser. Together with Land Wursten and their common hinterland they form, even today, a typical, relatively closed, cultural region. The name goes back to the Old Saxon Gau of Haduloha.

Today the name 'Land Hadeln' is mainly restricted to the dyked marshes in the lowland bay south of the Elbe estuary. It was surrounding by sandy meltwater depositions and moraines of the Saale glaciation (Pleistocene), such as the geest ridges of the Hohe Lieth to the west, the Westerberg (56 m above NN), and the Wingst (74 m above NN) to the east. To the south, between the islands of geest, sprawl extensive areas of fen and raised bog, that have been cultivated however, apart from a small terrain remnant in Ahlenmoor.

The marshland itself, forming part of the Elbe Marshes, is divided in turn into the fertile sea marsh, the so-called Hochland ("highland", ca. 1–2 m above NN; comprising much of today's collective municipality of Hadeln), and the Sietland on the edge of the bogs. Drainage is difficult and is handled mainly by the pumping station (Schöpfwerk Otterndorf) in Otterndorf as well as by the small lock near Altenbruch. At Otterndorf the waters of the Medem and its many tributaries, and the water of the Hadeln Canal, and Elbe-Weser Shipping Channel, is pumped into the Elbe. Hitherto the area, particularly the lower-lying Sietland which lies about 0.8 m below NN, had been chronically endangered by flooding.

The Land Hadeln lies in the Lower Elbe region. Its proximity to the Elbe estuary and the North Sea brings with it the danger that, in the event of a dyke breach during a storm surge the area, which lies just above sea level, will suffer major flooding.

Traditionally the land was used for agriculture, with pastureland and cattle farming on the geest and in the Sietland, and arable and fruit farming in the Hochland.

Following the closure of the cement works in Hemmoor the relatively small number of industrial workers reduced further. Many workers therefore commute to the ports of Cuxhaven, Bremerhaven and Stade. The economic importance of tourism, especially in the beach resorts of Otterndorf and the bogside lakes near Bad Bederkesa, is steadily increasing.