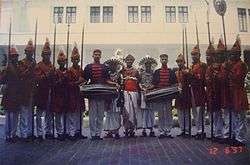 Reenactment of a Lascoreen Guard at Mount Lavinia Hotel in 1997

Lascarins (or Lascareen or Lascoreen or Lascarine) (Sinhalese: ලස්කිරිඤ්ඤ laskirigngna) is a term used in Sri Lanka to identify indigenous soldiers who fought for the Portuguese during the Portuguese era (1505–1658) and continued to serve as colonial soldiers until the 1930s. The lascarins played a crucial role not only in the colonial armies, but also in the success of the campaigns of the local kingdoms.[1][2][3]

The term originates from the Persian word Lascar, pronounced Lashkar (Persian: لشکر‎‎), meaning military camp or army - related to the Arabic 'Askar (Arabic: عسكر), meaning 'guard' or 'soldier' (whence Askari). The Portuguese adapted this term to lasquarin or lascarim, meaning an Asian militiaman or seaman. The latter meaning is preserved in English as Lascar. In Sri Lanka it was used in the military sense, which was also preserved in India as Gun Lascar. The Dutch adapted it to lascorijn and the English to lascariin, lascarine, lascoreen, etc.[4]

The Portuguese first landed in Sri Lanka in 1505 and by 1517 they were able to erect a fort in Colombo and controlled most of the inbound and outbound trade affairs. After the historical event known as 'Wijayaba Kollaya' in 1521 they became involved in the internal affairs and conflicts between local kingdoms. Due to the limited manpower from Portugal, the Portuguese hired local soldiers to defend Portuguese and the Kotte kingdom's interests and to assist in offensive purposes. Almost all of these Lascarins were Catholic converted Sinhalese (and in some cases Tamils) such as the Karava and the Niar.[3][5] This was a time when many members of local royalty was adopting Catholicism. After the Portuguese imposed direct control on local kingdoms (mainly the Kingdom of Kotte), many of the forces loyal to the king of Kotte became Lascarins and continued to hold ranks such as Mudali, Muhandiram, Arachchi or Kankani.

Lascarins were crucial for the occupying Portuguese forces, during their battles against local kingdoms because they knew the local geography. In almost every early battle the Portuguese fought in Sri Lanka, the majority of their army was composed of Lascarins. On many occasions the Lascarins changed sides and supported local kingdoms. In the 1594 Campaign of Danture the forces of Vimaladharmasuriya doubled as a result of these defections and in the Battle of Randeniwela, the Portuguese expedition of 1630, almost the entire contingent of Lascarcins defected.[1][2] For this reason, the Portuguese started to rely more on Indian, African (Kaffirs) and Malay mercenaries in their offensive campaigns during the latter stages of their rule. Lascarins also took part on both sides during the Dutch–Portuguese War which ended the Portuguese occupation of coastal Sri Lanka.[6][7]

Lascarins served on with the Dutch during the period 1640–1796. Lascarins were divided into 'ranchuwas' (randje) meaning company, each consisting of two or three native headmen, Mohandiram, Arachchies, or Kankanis and 24 rank and file. Several 'ranchus' were under the Mudaliyar of a Korale.[8]

During the British era they lost their military role becoming more of a ceremonial guard. Lascarins were maintained as small private units of powerful Mudaliyars who maintained them with the approval of the British authorities on the grounds of personal protection.

They would provide the honour guard for visits by members of the Royal Family and provided the guarded-escort for the Maldivian delegation bring the annual tributes (for British protection), to the Governor of Ceylon.[9] The official practice of maintaining Lascarins stopped after the closure of the Native Department with it the appointments of Mudaliyars in the 1930s - however Lascarins were present for ceremonial duties for years after.

The full complement of the Ceylon Government Lascoreen Guard–of-Honour consisted of thirty-six guards clad in scarlet tunics with gold embroidery, white cloth/trouser and plumed headgear. They carried lances and 'sesath' (white parasol) and marched to the beat of the tom-tom band and flutes piping military music.

A Lascoreen Guard was under the command of a 'Basnayake Muhandiram.' 'Basnayake'- derived from Dutch (baas + naik) meaning chieftain and 'Muhandiram' an honorary title conferred on the native officials of the administrative hierarchy. The Lascoreens of each Korale (county) were commanded by the Mudaliyar, a rank corresponding to Captain in European regiments. Below him was the Muhandiram or Lieutenant. The non-commissioned officers were the Cangaans (sergeants) or Kanganies. Soldiers occupying the rank of Private were simply 'Lascoreens'.[10]