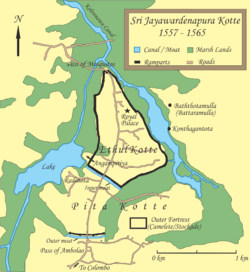 The Kingdom of Kotte, centered on Sri Jayawardenepura Kotte (located just outside present-day Colombo), was a kingdom that flourished in Sri Lanka during the 15th century.

The term Kotte is derived from "Kottai", the Tamil word for castle. The word Kottai is derived from the word "Ko" meaning King and "Vittai" meaning house, in Tamil. The castle or fortress was founded by Alakesvara of the Alagakkonara family originally hailing from Kanchipuram, Tamil Nadu[1]

Originally founded as a fortress by Minister Alakesvara (1370–1385) during the reign of Vikramabahu III of Gampola to checkmate invasions from South India on the western coast, Parakramabahu VI later made Sri Jayawardenepura Kotte his capital city in 1412. It was well protected by the large swamp which surrounded the area.[2]

Parakramabahu VI first became the king of Raigama in 1412, then in 1415 he made Sri Jayawardenepura Kotte his capital. The King upgraded the existing citadel and built a new royal palace. Parakramabahu VI waited until ties between the Vijayanagara Empire and Jaffna kingdom were severed. First he captured the Vanni and made its leaders loyal to him. Prince Sapumal was the commander of the Kotte army at the time.

In 1450, Parakramabahu VI had, with his conquest of the Jaffna kingdom in northern Sri Lanka, unified all of Sri Lanka. At its height, the Kingdom oversaw one of greatest eras of the Sinhalese literature. Notable poets at the time were Buddhist monks such as Thotagamuwe Sri Rahula Thera, Weedagama Maihree thero, and Karagala Wanarathana thero. By 1477, however, 10 years after the death of Parakramabahu VI, regional kingdoms became more powerful. Most notably a new Kingdom was founded in central hill-country of the island by Senasammatha Wickremabahu who successfully led a rebellion against the Kotte Kingdom in 1469.

Parakramabahu IX of Kotte moved the capital to Kelaniya in 1509 and it stayed there until 1528.

Arrival of the Portuguese

The Portuguese arrived in Sri Lanka in 1505,[3] landing in Galle Harbour. Once they learnt that they had arrived in Sri Lanka, they sailed to Colombo.[3] They were taken by a tortuous route to the capital, Kotte, which was actually quite close by. This was done in order to create the impression that the kingdom was too far inland to make invasion from the harbour feasible. This plan was, however, spoilt by the fact that the Portuguese who remained with the ship fired the ship's cannon repeatedly, which sound was heard by the Portuguese party being taken to Kotte.[4] This incident gave rise to the local saying "Parangiya Kotte Giya Vage" ("like the Portuguese went to Kotte")[4] [පරන්ගියා කොට්ටේ ගියා වගේ], which refers doing something or going somewhere in a roundabout route instead of a direct route. However, during this meeting Portuguese managed to secure a trade agreement with the Kotte king.[5] 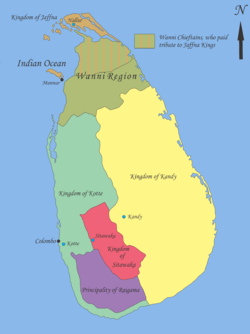 Political map of Sri Lanka following the "Spoiling of Vijayabahu"

Kotte Kingdom's downfall began with an event in 1521 which became known as the "Wijayaba Kollaya". The Kotte king Vijayabahu VII's three sons mutinied and killed their father dividing the kingdom among themselves.[6] This gave rise to three minor kingdoms, Kotte, Sitawaka and Principality of Raigama.[7] The divided Kingdom of Sitawaka became more powerful with local popular support and Kotte Kingdom had to rely on Portuguese for help. The king of Kotte after Wijayabe Kollaya, Buvenekabahu VII, got assistance from the Portuguese in order to defeat his brother, Mayadunne. He also allowed his daughter's son, Prince Dharmapala, to be baptized as a Catholic by the Portuguese. After Buvenekabahu had named Dharmapala as his heir, he was shot - supposedly by accident - by a Portuguese soldier.

In 1565,[8] capital of Kotte was abandoned by Dharmapala of Kotte due to frequent attacks from the Kingdom of Sitawaka led by Mayadunne and his son Rajasinghe I; he was taken into Colombo under Portuguese protection.[9] Most of the areas of Kotte Kingdom were annexed to the Kingdom of Sitawaka[10] however after the downfall of Sitawaka in 1594, these areas were re-annexed to the Kotte kingdom.[11] In 1597 Dharmapala gifted the Kotte Kingdom to the Portuguese throne and Kotte era was officially ended.

The military of the Kotte kingdom was closely associated with both its rise and demise. Poems written in this era give vivid accounts of the contemporary military. Before the arrival of the Portuguese, there are no signs of the use of fire arms in the kingdom. The military consisted of four main departments, namely

In the final periods of the kingdom, the Portuguese were often in charge of the military.

The kingdom was situated near Colombo, a very important port at the time. Moorish merchants from India and Arabia dominated the trade of the kingdom until the arrival of the Portuguese. The spice trade, eg in cinnamon, cardamom, black pepper, dominated the exports while gemstones also was a big export. After the conquest of Jaffna, Kotte possessed the pearl trading which gave an enormous wealth to the kingdom. Portuguese who arrived in there as traders were able to secure a trading deal with the kingdom on their first visit.

One of the greatest of fields that flourished under his rule was literature and art, since the king himself was very fond of it. Royal patronage was given to literature paving way to a golden age of literature in the island.

Notable art works of the era 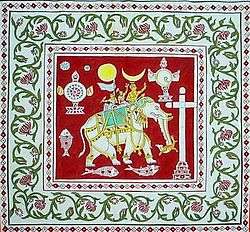 Poems and other anthology

These institutions paved way not only to the enhancement of Buddhist literature but also to the development of Ayurvedic medicine. 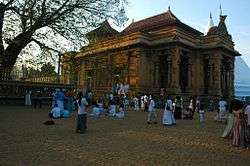 Buddhism was the religion of majority and given the Royal Patronage. A Temple of Tooth relic was built near the royal palace. Kotte Raja maha Viharaya was enshrined by King Parakramabahu VI to Held Esala Perahara Pegent in Honor of the Sacred Tooth relic. The ancient Kelaniya Raja Maha Vihara also was repaired by the king Parakramabahu VI and Sri perakumba pirivena and Sunethra Devi pirivena have become most famous monasteries in the country and still the same.

Hinduism was also given a foremost place in society. Most of the Buddhist temples entrusted shrines of Hindu gods Vishnu, Murugan (God Katahargama)and Goddess Paththini and God Gambara as the provincial God. Prince Sapumal (later Bhuvanekabahu VI had built a shrine near the ancient bo tree of the Kotte Raja Maha Viharaya as a vow to defeat Arya chakravarthi.

The Portuguese converted much of the population into the Roman Catholic faith. The last king of Kotte, Don Juan Dharmapala, was the only Catholic Sinhalese king in Sri Lankan history, though several other contemporary kings had also been temporarily Catholic.