The Lazzaretto of Ancona, also called the Mole Vanvitelliana, is an 18th-century building constructed on an artificial island for the purpose of serving as quarantine station and Leprosarium for the port town of Ancona, Italy. 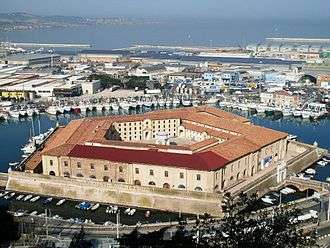 The Lazzaretto after renovation

The pentagonal building rises on an artificial island in the port which is now connected to the mainland by three bridges. It was a project commissioned by Pope Clement XII, designed by the architect Luigi Vanvitelli, and built (1733−1743). It has originally had no land link to the mainland. A well was located in the central Neoclassical tempietto dedicated to Saint Roch, patron of lepers, in the center of the courtyard. It was built to house possibly infected travellers and goods arriving in the port, as well as lepers.

While the term lazaretto has been interpreted by some as merely a quarantine station for maritime travellers, for centuries it was the term used to refer to lazar house (Leprosarium or Leper colony), referring to the one of the two New Testament persons named Lazarus (Luke 16:19-31).

Over the years, the site has taken different functions, mainly as a military citadel since the 19th century. During World War I, there was a failed attempt to sabotage the Italian naval resources by 60 infiltrating Habsburg sailors. Now it is used as a site of the museum Tattile Omero, as well as home for various exhibitions.

It is not clear why a pentagonal shape was chosen for the building. However, the rationalistic and functional ensemble is common to many works of late Enlightenment architecture. The simple but elegant style somehow seeks to redeem the intended, but somewhat sordid purpose; and in this case, enlightened architecture for a less enlightened aim of segregating the elements of the populace that could be viewed as pestilent. The efforts of this work can be compared to the contemporary architecture of institutions meant to provide geometrically compelling structures to house services for the poor in Naples by Fernando Fuga, such as the massive Royal Hospice and Hospital for the Poor and the mathematical Cemetery of the 366 Fossae.