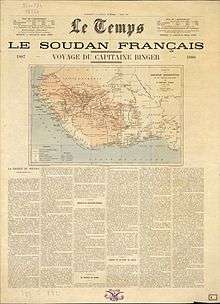 Le Temps (French pronunciation: ​[lə tɑ̃], The Times) was one of Paris's most important daily newspapers from 25 April 1861 to 30 November 1942. It was the serious paper of record.

Founded in 1861 by Edmund Chojecki (writing under the pen name "Charles Edmond") and Auguste Nefftzer, Le Temps was under Nefftzer's direction for ten years, when Adrien Hébrard took his place, and for nearly 45 years directed the newspaper with an iron hand until his death in 1914. He was succeeded by his sons Émile (1914), and Adrien Jr. (1925) and by Louis Mills (1929). Soon after Mills' death in 1931, Le Temps became a public limited company. Adrien Hébrard and his successors left substantial freedom to the editorial room and the newspaper had the reputation of keeping its journalists for a long time. Le Temps always remained moderate politically. The early issues of the newspaper reflected Nefftzer's liberal philosophy had considerable trouble achieving readership. He had to frequently turn to friends in Alsace who were able to help support Le Temps financially. However, circulation continued to grow, from scarcely 3,000 in 1861, to 11,000 in 1869, 22,000 in 1880, 30,000 in 1884, 35,000 in 1904. During the interwar period it varied between 50,000 to 80,000. Despite this comparatively modest circulation, Le Temps soon became the most important newspaper of the French Republic particularly among the French political and economic elite. The political and diplomatic information and commentaries contained in this quality newspaper, "serious to the point of boredom", also carried considerable clout elsewhere in Europe.[1]

Journalists and correspondents included Georges Bruni, and Adolphe Cohn in the United States.

The Paris edition of Le Temps was suspended by the Paris Commune, and as such, lacks issues from 7 May – 19 May 1871. The St. Germain edition, however, ran continuously for 81 years.

On 28 November 1942, following the German invasion of the Zone Libre, Jacques Chastenet and Émile Mireaux, the two co-directors of Le Temps, jettisoned the newspaper. At Charles de Gaulle's request, Le Monde was founded on 19 December 1944 to replace Le Temps as the newspaper of record, borrowing the layout and typeface of Le Temps for the new newspaper.[2]