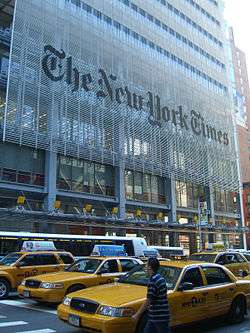 A "newspaper of public record", sometimes referred to as an "official newspaper", refers to a publicly available newspaper that has been authorised by a government to publish public or legal notices.[2] It is often established by statute or official action and publication of notices within it, whether by the government or a private party, is usually considered sufficient to comply with legal requirements for public notice.[3]

In some jurisdictions, privately owned newspapers may register with the public authorities to publish public and legal notices, or be otherwise eligible to publish said notices (terms used may include "newspaper of general circulation" among others).[4][5][6] Likewise, a private newspaper may be designated by the courts for publication of legal notices, such as notices of fictitious business names. These are sometimes referred to as "legally adjudicated newspapers".[7]

A variation of newspapers of public record are those newspapers controlled by governments or political parties that serve as official newspapers reflecting the positions of their controlling bodies. State organs such as the Soviet-era Izvestia (the name of which translates to "delivered messages", derived from the verb izveshchat which means "to inform", "to notify")[8] and the People's Daily in China[9][10][11][12][13] are examples of this type.

Newspapers of record (by reputation)

The second type of "newspaper of record" (also known as a "journal of record", or by the French term presse de référence) is not defined by any formal criteria and its characteristics can be variable. The category typically consists of those newspapers that are considered to meet higher standards of journalism than most print media, including editorial independence and attention to accuracy, and are usually renowned internationally.[14][15] Despite changes in society, such newspapers have historically tended to maintain a similar tone, coverage, style, and traditions.[14]

The term is believed to have originated among librarians, who began referring to The New York Times as the "newspaper of record" when, in 1913, it became the first U.S. newspaper to publish an index of the subjects covered in its pages.[16] In recognition of the usage, the Times held an essay contest in 1927 in which entrants had to demonstrate "The Value of The New York Times Index and Files as a Newspaper of Record". The Times, and other newspapers of its type, then sought to be chroniclers of events, acting as a record of the day's announcements, schedules, directories, proceedings, transcripts and appointments. The Times no longer considers itself a newspaper of record in the original, literal sense.[17]

Over time, historians began to rely on The New York Times and similar titles as a reliable archival record of significant past events and a gauge of societal opinions at the time of printing. The term "newspaper of record" thus evolved from its original literal sense to its currently understood meaning.[16]