In professional education, learning by teaching (German: Lernen durch Lehren, short LdL) designates currently the method by Jean-Pol Martin that allows pupils and students to prepare and to teach lessons, or parts of lessons. Learning by teaching should not be confused with presentations or lectures by students, as students not only convey a certain content, but also choose their own methods and didactic approaches in teaching classmates that subject. Neither should it be confused with tutoring, because the teacher has intensive control of, and gives support for, the learning process in learning by teaching as against other methods. 2016 Weng/Pfeiffer emphazises Martin as "a precursor of the frequently mentioned 'shift from teaching to learning'" [1]

Seneca the Younger told in his letters to Lucilius that we are learning if we teach (epistulae morales I, 7, 8): docendo discimus (lat.: "by teaching we are learning"). At all times in the history of schooling there have been phases where students were mobilized to teach their peers. Frequently, this was to reduce the number of teachers needed, so one teacher could instruct 200 students. However, since the end of the 19th century, a number of didactic-pedagogic reasons for student teaching have been put forward.

Students as teachers in order to spare teachers

In 1795 the Scotsman Andrew Bell[2] wrote a book about the mutual teaching method that he observed and used himself in Madras. The Londoner Joseph Lancaster picked up this idea and implemented it in his schools. This method was introduced 1815 in France in the "écoles mutuelles", because of the increasing number of students who had to be trained and the lack of teachers. After the French revolution of 1830, 2,000 "écoles mutuelles" were registered in France. Due to a political change in the French administration, the number of écoles mutuelles shrank rapidly and these schools were marginalized. It is important to stress that the learning level in the Bell-Lancaster-schools was very low. In hindsight, the low level can probably be attributed to the fact that the teaching-process was delegated entirely to the tutors and that the teachers did not supervise and support the teaching process.

Students as teachers in order to improve the learning-process 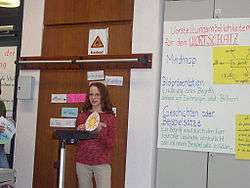 The first attempts using the learning by teaching method in order to improve learning were started at the end of the 19th century.

LdL as a comprehensive method

The method received broader recognition starting in the early eighties, when Jean-Pol Martin developed the concept systematically for the teaching of French as a foreign language and gave it a theoretical background in numerous publications.[10] In 1987 he founded a network of more than a thousand teachers that employed learning by teaching (the specific name: LdL = "Lernen durch Lehren") in many different subjects, documented its successes and approaches and presented their findings in various teacher training sessions.[11] From 2001 on LdL has gained more and more supporters as a result of educational reform movements started throughout Germany.

LdL by Martin consists of two components: a general anthropological one and a subject-related one.

After intensive preparation by the teacher, students become responsible for their own learning and teaching. The new material is divided into small units and student groups of not more than three people are formed. Each group familiarizes itself with a strictly defined area of new material and gets the assignment to teach the whole group in this area. One important aspect is that LdL should not be confused with a student-as-teacher-centered method. The material should be worked on didactically and methodologically (impulses, social forms, summarizing phases etc.). The teaching students have to make sure their audience has understood their message/topic/grammar points and therefore use different means to do so (e.g. short phases of group or partner exercises, comprehension questions, quizzes etc.).

Martin attempted to transfer the brain structure, especially the operating model from neural networks – to classroom interactions.[12] The activities conducted during the various lessons phases and their consequences are summarized in the following table:[13]

Most teachers using the method do not apply it in all their classes or all the time. They state the following advantages and disadvantages:

The development of such transferable skills or 'employability' skills is considered to be an important aspect of learning by teaching approaches.[14][15]

Martin's work has been well received in teacher training and by practicing teachers: since 1985 more than 100 teacher students in all subjects wrote their ending thesis about LdL. Also the education administration received both the theory and the practice of LdL (vgl.Margret Ruep 1999[16]). In didactics handbooks LdL has been described as an "extreme form of learner centred teaching"[17]). On the university level, LdL has been disseminated by Joachim Grzega in Germany, Guido Öbel[18] in Japan and Alina Rachimova[19] in Russia.

Sudbury schools, since 1968, do not segregate students by age, so that students of any age are free to interact with students in other age groups. One effect of this age mixing is that a great deal of the teaching in the school is done by students. Here are some statements about Learning by teaching in the Sudbury Schools:[20]

"Kids love to learn from other kids. First of all, it's often easier. The child teacher is closer than the adult to the students' difficulties, having gone through them somewhat more recently. The explanations are usually simpler, better. There's less pressure, less judgment. And there's a huge incentive to learn fast and well, to catch up with the mentor.
Kids also love to teach. It gives them a sense of value, of accomplishment. More important, it helps them get a better handle on the material as they teach; they have to sort it out, get it straight. So they struggle with the material until it's crystal clear in their own heads, until it's clear enough for their pupils to understand."

In the 1950s Dr. Donald D. Durrell and his colleagues at Boston University pursued similar methods which they named Pupil-Team Learning. A year-long efficacy study in the schools of Dedham, Massachusetts, was published in the Boston University Journal of Education, Vol. 142, December, 1959, entitled "Adapting Instruction to the Learning Needs of Children in the Intermediate Grades" in which one of the authors, Walter J. McHugh, reported significant learning gains from the use of pupil teams.

In the 1930s Lev Vygotsky wrote extensively, in Russian, on the profound connection between language and cognition, and in particular oral language (speech) and learning. The implication of Vygotsky's observations for Learning by Teaching would appear to be direct and apt. "The one who does the talking, does the learning" may best summarize the point: students learn by teaching their peers.