Lechlade, or Lechlade-on-Thames, is a town at the southern edge of the Cotswolds in Gloucestershire, England. It is the highest point at which the River Thames is navigable. The town is named after the River Leach that joins the Thames near The Trout Inn.

The town is a popular venue for tourism and river-based activities. There are several pubs, some antique shops, a convenience store, food outlets, a garden centre and a Christmas shop. Near the 15th century Church of England parish church of Saint Lawrence, in the centre of the town, there is a large open space which is now a car park. The main roads through the town are busy, as the town is at the crossroads of the A417 and A361. Where the A361 enters the town from the south it crosses the River Thames on Halfpenny Bridge. Another tributary of the Thames, the River Coln, joins the Thames at the Inglesham Round House. Lechlade has hosted a music festival since 2011.[2] In 2015 the festival's headline act was Status Quo.[3]

Lechlade falls in the 'Kempsford-Lechlade' electoral ward. This ward stretches from Lechlade in the east to Kempsford in the west. The total population of this ward taken from the 2011 census was 3,973.[4]

Although in Gloucestershire, and traditionally in Brightwells Barrow hundred, from 1894 till 1935 the town was administered as part of Faringdon rural district. From 1935 till 1974 it was part of Cirencester rural district, and since 1974 it has been a part of Cotswold district.[5] 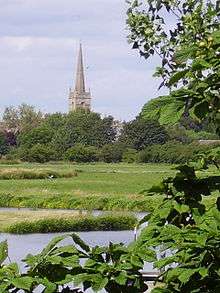 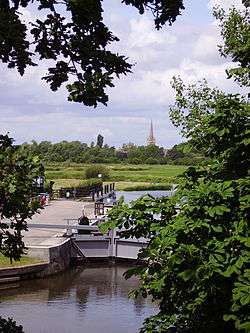 Lechlade is the highest town to which the River Thames is navigable by relatively large craft including narrowboats. It is possible to travel by river or on foot from here to London. Indeed, in the early eighteenth century goods unloaded in Bristol were transported to Gloucester, carried overland to Lechlade and sent down the Thames to London.[6] The Halfpenny bridge is therefore the usual start for a water based Thames meander - the term for a long distance journey down the Thames. The Thames Path also continues upstream to the traditional source of the Thames at Thames Head). The river is actually navigable for a short distance further upstream, near the village of Inglesham, where the Thames and Severn Canal joins the River Thames. Rowing boats can reach even further upstream, to Cricklade. Lechlade is a popular resort for Thames boating. Boats of different types can be hired from here, from rowing boats to river cruisers.

The highest lock on the Thames is St John's Lock, at Lechlade, where there is a statue of Old Father Thames overlooking the boating activities. There is a view from St John's Bridge across the lock and the meadows to the spire of St Lawrence's parish church. The River Leach flows into the Thames at St John's Bridge. The poet Percy Bysshe Shelley composed A Summer Evening Churchyard here which includes the lines

Clothing in hues of heaven thy dim and distant spire

Around whose lessening and invisible height

Gather among the stars the clouds of night

Lechlade has a number of youth activities, most of them centred on the Memorial Hall and the adjacent Lechlade Pavilion Hall. Behind the Town Hall are large playing fields, an astro turf pitch, a skate park and a playground.

1970 Squadron, Air Training Corps was founded in the town in 1997. The squadron's membership consists of young people from Lechlade and neighbouring towns such as Fairford and Faringdon. The unit has now disbanded and all cadets have been transferred.

The 1st Lechlade Scout Group can trace its origins back to 1915 when Robert Baden-Powell inspected Scouts from Lechlade and the surrounding area (see 1915 photo at the Cotswold Scout District website).