This article is about the academic rank. For for a person who gives public speeches, see lecture.
For the ecclesiastical usage, see Lecturer (clergy).

In the United Kingdom and Ireland, a lecturer holds an open-ended, tenure-track or tenured position at a university or similar institution, and is often an academic at an early career stage who teaches, conducts research, and leads research groups. Most lecturers typically hold permanent contracts at their academic institution. In terms of responsibilities and recognition, the position of an open-ended lecturer on a permanent contract is equivalent to assistant professor or associate professor in the North American academic system. This is a tenure-track or tenured position, although UK tenure has eroded since 1988.

In other countries, the term lecturer generally denotes an academic expert without tenure in the university, who is hired to teach on a full- or part-time basis, but who is not paid to conduct research. In most research universities in the United States, the title of lecturer requires a doctorate or equivalent degree.

In the UK, the term lecturer is ambiguous and covers several academic ranks. The key distinction is between permanent/open-ended or temporary/fixed-term lectureships.

A permanent lecturer in UK universities usually holds an open-ended position that covers teaching, research, and administrative responsibilities. Permanent lectureships are tenure-track or tenured positions that are equivalent to an assistant or associate professorship in North America. After a number of years, a lecturer may be promoted based on his or her research record to become a senior lecturer. This position is below reader and professor.

Research lecturers (where they are permanent appointments) are the equivalent in rank of lecturers and senior lecturers, but reflect a research-intensive orientation. Research lecturers are common in fields such as medicine, engineering, and biological and physical sciences.

In contrast, fixed-term or temporary lecturers are appointed for specific short-term teaching needs. These positions are often non-renewable and are common post-doctoral appointments. In North American terms, a fixed-term lecturer can hold an equivalent rank to assistant professor without tenure. Typically, longer contracts denote greater seniority or higher rank. Teaching fellows may also sometimes be referred to as lecturers - for example, Exeter named some of that group as education and scholarship lecturers (E & S) to recognise the contribution of teaching, and elevate the titles of teaching fellows to lecturers. Some universities also refer to graduate students or others, who undertake ad-hoc teaching for a department sessional lecturers. Like adjunct professors and sessional lecturers in North America, these non-permanent teaching staff are often very poorly paid (as little as £6000 p.a. in 2011-12). These varying uses of the term lecturer cause confusion for non-UK academics.

In summary, most UK academics with the rank of lecturer have open-ended or permanent positions, can lead research groups, can apply for external funding for research as principal investigators, and have teaching responsibilities.

Historically in the UK, promotion to a senior lectureship reflected prowess in teaching or administration rather than research, and the position was much less likely to lead direct to promotion to professor.[2]

In contrast, promotion to senior lecturer nowadays is based on research achievements (for research-intensive universities), and is an integral part of the promotion path to a full chair. Promotion to reader is sometimes still necessary before promotion to a full chair; however, some universities no longer make appointments at the level of reader (for instance, the University of Leeds and the University of Oxford). Senior lecturers and readers are sometimes paid on the same salary scale, although readers are recognized as more senior. Readers in pre-1992 universities are generally considered at least the equivalent, in terms of status, of (full) professors in post-1992 universities. Many academics consider it more prestigious to have been a reader in a pre-1992 university than a professor in a post-1992 university.

Many open-ended lecturers in the UK have a doctorate (50.1% in 2009-2010) and often have postdoctoral research experience.[3] In almost all fields, a doctorate is a prerequisite, although historically this was not the case. Some academic positions could have been held on the basis of research merit alone, without a higher degree.[4]

According to the Times Higher Education, the University of Warwick decided in 2006 "to break away from hundreds of years of academic tradition, renaming lecturers 'assistant professors', senior lecturers and readers 'associate professors' while still calling professors 'professors'. The radical move will horrify those who believe the "professor" title should be reserved for an academic elite."[6] Nottingham has a mixture of the standard UK system, and the system at Warwick, with both lecturers and assistant professors. At Reading, job advertisements and academic staff web pages use the title associate professor, but the ordinances of the university make no reference to these titles. They address only procedures for conferring the traditional UK academic ranks.[7]

Since the Conservatives' 1988 Education Reform Act, the ironclad tenure that used to exist in the UK has given way to a less secure form of tenure.[8] Technically, university vice-chancellors can make individual faculty members redundant for poor performance or institute departmental redundancies, but in practice, this is rare. The most noted use of this policy happened in 2012 at Queen Mary University where lecturers on permanent contracts were fired. The institutions now has a stated policy of firing and replacing under-performing teaching staff members. This policy is complicated by the 2008 Ball vs Aberdeen tribunal decision, the distinction between teaching and research faculty is blurring- with implications for who can and cannot be made redundant at UK universities, and under what conditions.

Despite this recent erosion of tenure in the UK, it is still practiced in most universities. Permanent contracts use the word "tenure" for lecturers who are "reappointed to the retiring age". This is equivalent to a US tenure decision - references are sought from world-leading academics and tenure and promotions committees meet to decide "tenure" cases. There is normally no title elevation is such instances - tenure and title are independent.

As different US academic institutions use the term lecturer in various ways, there is sometimes confusion. On a generic level, the term broadly denotes one who teaches at a university but is not eligible for tenure and has no research obligations. At non-research colleges, the latter distinction is less meaningful, making the absence of tenure the main difference between lecturers and other academic faculty. Unlike the adjective adjunct (which can modify most academic titles, from professor to lecturer to instructor, etc. and refers to part-time status), the title of lecturer at most schools does not address the issue of full-time vs. part-time status.

Lecturers are almost always required to have at least a master's degree and quite often have earned doctorates. (For example, at Columbia University in New York, the title of lecturer actually requires a doctorate or its professional equivalent; they also use the term for "instructors in specialized programs."[9]) Sometimes the title is used as an equivalent-alternative to instructor, but schools that use both titles tend to provide relatively more advancement potential (e.g. multiple ranks of progression, at least some of which entail faculty voting privileges and/or faculty committee service) to their lecturers.[10]

Major research universities are more frequently hiring full-time lecturers, whose responsibilities tend to focus primarily in undergraduate education, especially for introductory/survey courses. In addition to the reason of higher-ranking faculty tending to prefer higher-level courses, part of the reason is also cost-savings, as non-tenure-track faculty tend to have lower salaries.[11] When a lecturer is part-time, there is little practical distinction in the position from an adjunct professor/instructor/etc., since all non-tenure-track faculty by definition are not on the tenure-track. However, for full-time lecturers (or those regularly salaried above some stated level, such as half-time[12]), many institutions now incorporate the role quite formally - managing it with performance reviews, promotional tracks, administrative service responsibilities, and many faculty privileges (e.g. voting, use of resources, etc.).[10]

An emerging alternative to using full-time lecturers at research institutions is to create a parallel professorship track that is focused on teaching. It may offer tenure, and typically has a title series such as teaching professor. (This is analogous to the research-only faculty tracks at some universities, which typically have title series such as research professor/scientist/scholar.) A related concept - at least in professional fields - is the clinical professor or professor of practice, which in addition to a teaching focus (vs. research), also tend to have a practical/professional/skills oriented focus (vs. theory and scholarship, etc.).

In some institutions, the position of lecturer, especially "distinguished lecturer," may also refer to a position somewhat similar to emeritus professor and/or a temporary post used for visiting academics of considerable prominence — e.g. a famous writer may serve for a term or a year, for instance. When confusion arose about President Barack Obama's status on the law faculty at the University of Chicago, the institution stated that although his title was "senior lecturer," the university considered him to be a "professor" and further noted that it uses that title for notable people, such as federal judges and politicians, who are deemed of high prestige but lack the time to commit to a traditional tenure-track position.[13] While other universities instead use the term "senior" as simply a matter of rank or promotion, all such references to lecturers of any rank are consistent with the normal U.S. practice of using lower-case-p "professor" as a common noun for anyone who teaches college, as well as a pre-nominal title of address (e.g. "Professor Smith") without necessarily referring to job title or position rank (e.g. "John Smith, Assistant/Associate/Full Professor of X").

In India, one can appear for interviews for a post of a lecturer after passing the competitive exam of National Eligibility Test conducted by the University Grants Commission.

As such, most lecturers' position can be considered tenure track.

In many states of India, the term lecturer or postgraduate teacher (PGT)[15] is also used for the intermediate college teachers.[16] The intermediate colleges are equivalent to higher secondary schools. Such lecturers are subject experts specifically engaged to teach a subject in higher classes.[17] 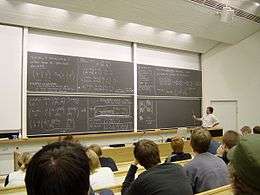 A mathematics lecture, apparently about linear algebra, at Helsinki University of Technology, Finland. 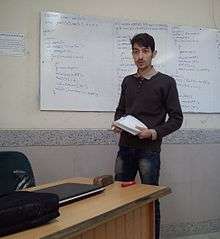 In other countries, usage varies. In Israel, the term has a meaning in academia similar to that in the UK.

In France, the title maître de conférences ("lecture master") is the lower of the two possible academic ranks (the other being professeur des universités or "university professor").

In German-speaking countries, the term lektor historically denoted a teaching position below a professor, primarily responsible for delivering and organizing lectures. The contemporary equivalent is dozent or hochschuldozent. Nowadays, the German term lektor exists only in philology or modern-language departments at German-speaking universities, for positions that primarily involve teaching a foreign language.

In Poland, the related term lektor is used for a teaching-only position, generally for teaching foreign languages.

In Norway, a lektor is an academic rank, usually reached after three or five years of post-secondary education, which enables a teacher to lecture at Ungdomsskole (secondary school) or Videregående skole (high school) level.

In Sweden and Denmark, a lektor or universitetslektor is an academic rank similar to that of senior lecturer in Great Britain and associate professor in USA. The lektor holds the position below professor in rank.

In the Netherlands, a "lector" used to be equivalent to the rank of associate professor at universities. Nowadays, it is the highest rank at so-called "applied universities" (i.e., school providing higher vocational/professional training to their students). At regular universities, this rank does not exist anymore.