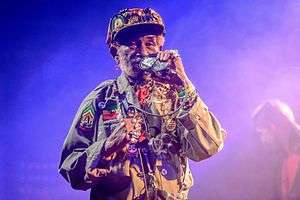 Lee "Scratch" Perry OD (born Rainford Hugh Perry; 20 March 1936 in Kendal, Jamaica)[1] is a Jamaican music producer/Inventor noted for his innovative studio techniques and production values. Perry was one of the pioneers in the development of dub music with his early adoption of effects and remixing to create new instrumental or vocal versions of existing reggae tracks.[2] Perry has worked with Bob Marley and the Wailers, Junior Murvin, the Congos, Max Romeo and many others.

Perry was born in Kendal in the parish of Manchester, the third child of Ina Davis and Henry Perry.[3] His mother had strong African traditions originating from her Yoruba ancestry that she passed on to her son.[3] He later moved to Kingston where he apprenticed at Studio One.[4]

Perry's musical career began in the late 1950s as a record seller for Clement Coxsone Dodd's sound system. As his sometimes turbulent relationship with Dodd developed, he found himself performing a variety of important tasks at Dodd's Studio One hit factory, going on to record nearly thirty songs for the label.[1] Disagreements between the pair due to personality and financial conflicts led him to leave the studio and seek new musical outlets. He soon found a new home at Joe Gibbs's Amalgamated Records.[1]

Working with Gibbs, Perry continued his recording career but, once again, financial problems caused conflict. Perry broke ranks with Gibbs and formed his own label, Upsetter Records, in 1968. His first major single "People Funny Boy", which was an insult directed at Gibbs, sold well with 60,000 copies sold in Jamaica alone. It is notable for its innovative use of a sample (a crying baby) as well as a fast, chugging beat that would soon become identifiable as "reggae" (the new kind of sound which was given the name "Steppers"). Similarly his acrimonious 1967 single as Lee "King" Perry Run for Cover was likewise aimed at Sir Coxsone. From 1968 until 1972 he worked with his studio band The Upsetters. During the 1970s, Perry released numerous recordings on a variety of record labels that he controlled, and many of his songs were popular in both Jamaica and the United Kingdom. He soon became known for his innovative production techniques as well as his eccentric character.[1] In 1970 Perry produced and released The Wailers track "Mr Brown" (1970) with its unusual use of studio effects and eerie opening highlighting his unique approach to production.

In 1973, Perry built a studio in his back yard, the Black Ark, to have more control over his productions and continued to produce notable musicians such as Bob Marley & the Wailers, Junior Byles, Junior Murvin, the Heptones, the Congos and Max Romeo. With his own studio at his disposal, Perry's productions became more lavish, as the energetic producer was able to spend as much time as he wanted on the music he produced. Virtually everything Perry recorded in The Black Ark was done using basic recording equipment; through sonic sleight-of-hand, Perry made it sound unique. Paul Douglas mentions, “Scratch had a particular sound and everybody was fascinated by his sound.  He had this way of putting things together; it was just his sound and it influenced a lot of people.  I’ve even gone to the Black Ark with Eric Gale for that Negril (album) album; I remember myself and Val Douglas, we laid some tracks there, Eric Gale overdubbed stuff on there, but I honestly don’t remember what happened to it.[5]” Perry remained behind the mixing desk for many years, producing songs and albums that stand out as a high point in reggae history.

By 1978, stress and unwanted outside influences began to take their toll: both Perry and The Black Ark quickly fell into a state of disrepair. Eventually, the studio burned to the ground. Perry has constantly insisted that he burned the Black Ark himself in a fit of rage.

After the demise of the Black Ark in the early 1980s, Perry spent time in England and the United States, performing live and making erratic records with a variety of collaborators.[1] His career took a new path in 1985 when he met Mark Downie (Marcus Downbeat) with whom he worked on the 1986 album "Battle Of Armagideon" for Trojan. It was not until the late 1980s, when he began working with British producers Adrian Sherwood and Neil Fraser (who is better known as Mad Professor), that Perry's career began to get back on solid ground again. Perry also has attributed the recent resurgence of his creative muse to his deciding to quit drinking alcohol and smoking cannabis. In his earlier days, the act of producing for Perry was a frenzied and ritualistic one where he stated that "he blew smoke into the microphone so that the weed would get into the song."[6] Perry stated in an interview that he wanted to see if "it was the smoke making the music or Lee Perry making the music. I found out it was me and that I don't need to smoke."[7]

In 1998 Perry reached a wider global audience as vocalist on the track "Dr. Lee, PhD" from the Beastie Boys' album Hello Nasty.[8]

In 2003, Perry won a Grammy for Best Reggae Album with the album Jamaican E.T.. In 2004, Rolling Stone ranked Perry #100 on their list of the 100 Greatest Artists of All Time.[9] More recently, he teamed up with a group of Swiss musicians and performed under the name Lee Perry and the White Belly Rats, and toured the United States in 2006 and 2007 using the New York City-based group Dub Is A Weapon as his backing band. Currently there are two films made about his life and work: Volker Schaner's Vision Of Paradise and The Upsetter by film-makers Ethan Higbee and Adam Bhala Lough.

In 2007, Perry's song "Enter the Dragon" was sampled on the track "Carrots" by Panda Bear of Animal Collective. As well, Perry was selected by Animal Collective in 2011 to perform at All Tomorrow's Parties, which the band curated in May 2011.[10] That same year, he recorded Rise Again with bassist and producer Bill Laswell; the album featured contributions from Tunde Adebimpe, Sly Dunbar and Bernie Worrell, and was released on Laswell's M.O.D. Technologies label.[11]

In 2008, Perry reunited with Adrian Sherwood on The Mighty Upsetter.. Between 2007 and 2010, Perry recorded three albums with British producer, Steve Marshall. The albums featured performances by Keith Richards, and George Clinton. Two of these albums, End Of An American Dream (2008) and Revelation (2010), received Grammy nominations in the category Best Reggae Album. 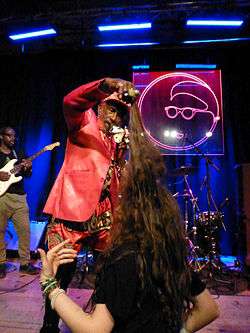 Audience participation at a Lee Perry gig in Manchester, 2013

In 2009, Perry collaborated with Dubblestandart, on their Return from Planet Dub double album, revisiting some of his material from the 1970s and 1980s, as well as collaborating on new material with Dubblestandart, some of which also included Ari Up of the Slits. In 2008 leading up to this release, Perry's first foray into the dubstep genre was released on 12" vinyl, a collaboration with Dubblestandart and New York City's Subatomic Sound System called "Iron Devil".[12] That record was followed by several more reggae oriented dubstep collaborations with Dubblestandart and Subatomic Sound System on digital and vinyl, first Blackboard Jungle Vols. 1 & 2 (2009), which featured dancehall vocalist Jahdan Blakkamoore and then Chrome Optimism (2010)[13] which also featured American filmmaker David Lynch. Following that, in 2010, Scratch and Ari Up of The Slits on a limited edition Subatomic Sound System 7" called "Hello, Hell Is Very Low", a rootical dubstep tracks that would turn out to be one of Ari Up's last recordings and the final release during her lifetime.

In 2010, Perry had his first ever solo art exhibition at Dem Passwords art gallery in Los Angeles, California.[14] The show, titled "Secret Education," featured works on canvas, paper, and a video installation.

In 2011, The Upsetter, a documentary film about Perry narrated by Benicio Del Toro,[15] was released worldwide in theaters after its premiere at the 2008 SXSW Film Festival.[16] The film was directed and produced by the American film makers Ethan Higbee and Adam Bhala Lough and opened in Los Angeles in March 2011.[17] It continued to screen worldwide into 2012, with the DVD, ITUNES and Video On Demand release soon following.[18][19]

In 2012, Perry teamed with The Orb to produce The Orbserver in the Star House, which was recorded in Berlin over a period of several months.[20] The album earned critical acclaim,[21][22] and featured the single "Golden Clouds", named after the historic property located near Perry’s hometown in Jamaica. In August 2012 it was announced that Perry would receive Jamaica's sixth highest honour, the Order of Distinction, Commander class.[23]

Perry features as the DJ on the Dub and Reggae radio station Blue Ark in Grand Theft Auto V. The station includes a number of dubs by Perry and the Upsetters including Disco Devil and Grumblin' Dub.

In October 2013 it was announced that he was to be awarded a Gold Musgrave Medal later that month by the Institute of Jamaica.[24]

Perry has recorded an album with Daniel Boyle in London, released in May 2014 as Lee "Scratch" Perry – Back on the Controls.[25] The album received a Grammy nomination later that year.[26]

Perry currently resides in Switzerland, with his wife Mireille and two children. He set up a new studio there, the 'secret laboratory'. In 2015 the studio was damaged by a fire, which also destroyed his stage costumes and unreleased recordings.[28][29]

In 2015 Perry worked together with Belgium-based band Pura Vida & released "The Super Ape Strikes Again" which was mixed at The Last Ark Studio in Belgium using a combination of vintage gear and modern recording techniques.