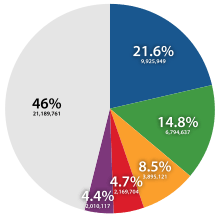 Lee is the typical romanization of the common South Korean surname I (Hangul 이), North Korean surname Ri (리). The name is written identically to the Chinese name Li 李 in Hanja characters. It is the second-most-common surname in Korea, behind only Kim.

Though the official Revised Romanization spelling of this surname is I, South Korea's National Institute of the Korean Language noted in 2001 that one-letter surnames were quite rare in English and other foreign languages and could cause difficulties when traveling abroad. However, the NIKL still hoped to promote systemic transcriptions for use in passports, and thus recommended that people who bore this surname should spell it Yi in the Roman alphabet.[1][2]

A few people with this surname historically spelled it Ye, as in Ye Wanyong of the Korean Empire. Rhee has also been used as the Latin letters as in Syngman Rhee and Simon Hang-bock Rhee 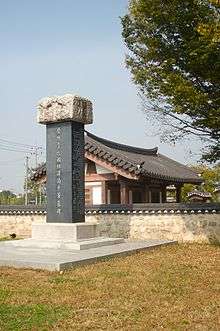 Monument for the founder of Gyeongju Yi clan

As with all Korean family names, the holders of the Yi surname are divided into different patrilineal clans, or lineages, known in Korean as bon-gwan, based on their ancestral seat. Most such clans trace their lineage back to a specific founder, and are generally not related to one another. This system was at its height under the yangban aristocracy of the Joseon Dynasty, but it remains in use today. There are approximately 241 such clans claimed by South Koreans. Most people with surname Yi (李) in Korea belong to either the Jeonju or Gyeongju clans. Also surname Yi (異) and Yi (伊) each have a different clans.

Imperial Household of the Jeonju Family 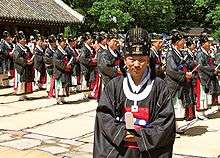 Descendents of the Jeonju Yi family perform rites called Jongmyo jerye to honor their ancestors in an annual ceremony the Korean government has declared an Important Intangible Cultural Asset.

This clan has direct imperial roots to the founding of the Joseon Dynasty. The founder of this clan was Yi Han, a native of Baekje who later married a Silla princess and became a high official of Silla. His 22nd-generation descendant, Taejo of Joseon, went on to found the Joseon Dynasty. The House of Yi ruled Joseon for 518 years between 1392 and 1910, and established many of the cultural, artistic and linguistic foundations for modern-day Korea.

During its reign, the House of Yi consolidated its effective rule over the territory of current Korea, encouraged the entrenchment of Korean Confucian ideals and doctrines in Korean society, imported and adapted Chinese culture, and saw the height of classical Korean culture, trade, science, literature, and technology. The House of Yi has left a substantial legacy to modern Korea; much of modern Korean etiquette, cultural norms, societal attitudes towards current issues, and the modern Korean language and its dialects derive from the culture and traditions of their ruling period.

As of 2014, the pretender to the Korean throne was Haewon, Princess of Korea. Members of the different branches of Jeonju Yi family dominated Korean history until the formation of the current Republic of Korea. Many families claim membership in the House of Yi, but few actually descend from the royal lineage. The House of Yi, in conjunction to its royal status, has produced innumerable figures of extraordinary influences in politics, the sciences, the arts, finance and academia. Many of these descendants play key roles in world politics, the sciences, the arts, finances, and academia today. Notable descendants include South Korea's first president Syngman Rhee; the inventor of the modern Korean alphabet, hangul, and renowned polymath King Sejong the Great; the founder of the Joseon dynasty, as well as modern Korea, King Taejo; among many others.

The founder of this clan was Alpyeong, one of the original village headmen of Silla, who chose Bak Hyeokgeose as the first king. According to the Samguk Sagi, the Yi name was officially bestowed on the family by King Yuri around 9 CE.

The Gyeongju Yi clan, according to the 2000 South Korean census, numbered over 1.4 million individuals, making it the most numerous of the clans that bear the surname Yi.[5]

The founder of this clan was Yi Gwang, an official of the Goryeo period. Yi Seung-Hun, who was the first person that brought Catholicism to Korea, was in Pyeongchang clan. Yi Seung- Hun descendant Namgang Lee Seung- Hun(1864-1930) was one of the most important figures in helping Korea gain its independence from Japan. Namgang Lee Seung- Hun was also one of the most financially successful people during his time. In his forties, Seunghun Lee devoted himself to social work and tried to support talented young people by founding the Kangmyung uisook and the Osan School. He participated in the New People’s Association (Shinminhui), and became a Christian in 1910.Seunghun Lee was sentenced to 10 years in 1911 due to ‘105 Persons Incident’ (a resistance movement by Korean patriots). In 1931, he was again sentenced to 3 years because he was one of the thirty three national representatives for the March 1st Independence Movement. Due to Seunghun Lee’s connection with the Independence Movement, the Osan School and other churches Seunghun Lee founded were burned by the authorities, and all of the teachers at Osan were arrested. When Seunghun Lee was released under probation from prison in 1922, he founded “Jamyeon Association” in Yongdong and donated 0.8 acre of land for co-op farming. Lee also established the Chosun Education Association with Sang-Jae Lee and Jin-Tae Yoo, and continued his education business with Osan School as its center. In 1930, his last request before he died was to donate his corpus for educational purposes, but his last wish was not fulfilled due to interference from the Japanese imperial authorities. In 1962, he received posthumously the order of merit for his national foundation.

The founder of this clan was Yi Dongsu, an official of the Goryeo period. This was a prominent yangban clan during the Joseon Dynasty, producing figures including the admiral Yi Sun-sin and the philosopher Yi I. The clan seat, Deoksu, corresponds to Deoksu-hyeon, an old division of what is now Kaep'ung-gun in Kaesong city, North Korea.

Jinseong Yi clan was known for the famous Joseon scholar Yi Hwang who founded the Yeongnam school and started a private Confucian academy. He also became one of the 18 Sages of Korea (동방 18현) and was honored as a Munmyo Bae-hyang (문묘배향).[6] The progenitor of this clan was Yi Seok from the Goryeo Dynasty.

The founder of Yongin clan was Yi Gil-gwon who helped to found Goryeo.

Prominent members of this clan include the Joseon Dynasty philosopher Yi Ik.

The founder of this clan was Jeong Dojeon, who was the first Prime Minister of Joseon and had close relations to King Yi Seonggye. He bestowed upon him the right to start his clan, a right only a yangban could ask, thus Jeong Dojeon created a new yangban clan. The clan's ancestral seat is Danyang.

The founder of this clan was Yi Man-yeong, an internal minister in Korea following the fall of the Goryeo Dynasty. He died of strangulation near an isolated mountain.

The founder of this clan was Yi Gyeon-ung, who helped found the Goryeo Dynasty.

The founder of the Hongju Yi clan was Yi Yu-seong, a member of the King's inner circle during the late Goryeo Dynasty. The clan's ancestral seat was bestowed when his 9th generation descendant, Yi Gi-jong, was titled. Hongyang/Hongju is located in present-day Hongseong, South Chungcheong Province. Especially during the late Goryeo and early Joseon Dynasties, the Hongju Yi clan produced many outstanding and influential people, including Yi Yeon-su, Yi Seong, Yi Seo, and Yi Jong-jang.

Yeonan Yi clan[7] was an aristocratic family clan during the Joseon Dynasty. They had several members become prime ministers and were known to have one of the highest numbers of Chief Scholars during that period. The progenitor was Yi Mu who was from Tang China.

People with the surname