Li (Chinese: 李; pinyin: Lǐ) is the second most common surname in People's Republic of China, only behind Wang.[1] It is also one of the most common surnames in the world, shared by 93 million people in China,[1] and more than 100 million worldwide.[2] It is the fourth name listed in the Song dynasty classic text Hundred Family Surnames.[3] According to the Sixth National Population Census of the People's Republic of China, Li takes back the number one surname in China with a population of 95,300,000 (7.94％).[4]

The name is pronounced as "Lei" in Cantonese, but is often spelled as Lee in Hong Kong, Macau, Taiwan and many other overseas Chinese communities. In Macau, it is also spelled as Lei. In Indonesia, it is commonly spelled as Lie, Lie is also the most common surname among Chinese in Indonesia.[5]

The common Korean surname, Lee (also romanized as Yi, Ri, or Rhee), and the Vietnamese surname, Lý, are both derived from Li and are historically written with the same Chinese character, 李.[6] The character also means "plum" or "plum tree".

According to tradition, the Li surname originated from the title Dali held by Gao Yao, a legendary minister of the Xia dynasty, and was originally written with the different character, 理. Laozi (Li Er), the founder of Taoism, was the first historical person known to have the surname and is regarded as the founding ancestor of the surname.

As the surname of the emperors of the Tang dynasty, Li was bestowed upon or adopted by numerous people, including many foreigners, during the period, and became one of the most common Chinese surnames.

Geographically, Li is the most common surname in North China and Southwest China. In provinces such as Henan, Hebei, Shandong, Shanxi, Jilin, Heilongjiang, and Yunnan, more than 8.8% of the local population are surnamed Li. Among all Chinese provinces, Henan has the largest number of Lis, accounting for 10.3% of the total.[2] Li is less common in southern and southeastern China. In Jiangxi, Zhejiang, Fujian, Hainan, as well as Taiwan, only 2.2 to 6.6% of the population share the surname.[2] 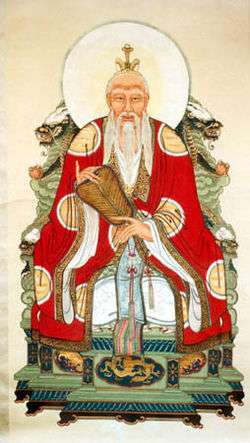 Laozi (Li Er), the first person known to be surnamed Li (李), is commonly worshipped as a god.

According to the ninth-century Tang dynasty text Yuanhe Xing Zuan, Li is a branch of the ancient ancestral name Ying (嬴) and descends from Emperor Zhuanxu, grandson of the mythical Yellow Emperor.[8] During the reign of Emperor Yao, Zhuanxu's descendant Gao Yao served as Dali (大理), or Minister of Law. During the Xia dynasty, Gao Yao's descendants adopted Li (理) as their surname, from the title Dali (meaning "great judge").[2][6]

It is uncertain how the character for Li changed from the original 理 to the current 李. According to popular folklore, at the end of the Shang dynasty, the minister Li Zheng (理征) was executed by King Zhou of Shang who was known for his cruelty. Li Zheng's son Li Lizhen (理利贞) escaped with his mother to the ruins of Yihou (伊侯之墟), where they survived by eating plums. In gratitude, Li Lizhen changed his surname to 李, a character that means "plum" and is a homophone of 理. Li Lizhen was said to have settled at Ku County (苦县), in modern Luyi County, Henan province, which is regarded as the original hometown of the Li surname.[2][6]

The first historical person known to have the surname is Li Er (李耳), better known as Laozi (fl. 6th century BC), the philosopher who founded Taoism. He was said to have been an eleventh-generation descendant of Li Lizhen. Laozi is widely revered as the founding ancestor of the Li surname.[2][6][9]

Another early origin of Li is the non-Huaxia Ba people, who established the Ba state during the Zhou dynasty in modern western Hubei province and Chongqing municipality. In 316 BC, Ba was conquered by the state of Qin, which would eventually conquer all the warring states to establish the Qin dynasty. Many Ba people adopted Li as their surname, as it sounded similar to the Ba word for tiger, which was a totem for the Ba.[2] In 304 AD, the Ba leader Li Xiong (Emperor Wu) established Cheng Han, the first Li-surnamed dynasty in history.[2] 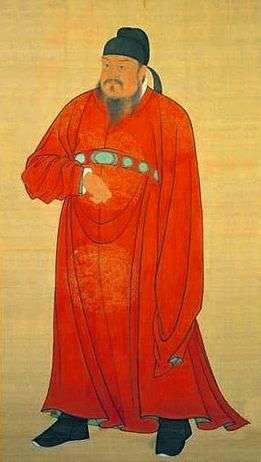 The Tang Longxi lineage also included sub lineages like the Guzang Li 姑臧李,[20][21][22] from which Li Zhuanmei 李專美 came from.[23]

Li was the imperial surname of the Tang dynasty, founded by Li Yuan in 618 AD. One of the most prosperous and influential dynasties in Chinese history, Tang was ruled by 20 emperors surnamed Li. The Tang emperors liberally granted the royal surname to favoured generals, officials, and their clans, such as Xu Shiji, Du Fuwei, and Guo Zihe. Many non-Chinese people under Tang's rule were also granted the Li surname, including the Eastern Tujue khan Ashina Simo (Li Simo), Mohe leaders Li Duozuo and Li Jinxing, Khitan leaders Li Guangbi and Li Jinzhong, and Goguryo general Li Zhengji. Many Tibetans, Uyghurs, Persians, and Jews were also granted or adopted the Li surname. The number of people surnamed Li skyrocketed during the Tang dynasty.[2][6]

There were Dukedoms for the offspring of the royal families of the Zhou dynasty, Sui dynasty, and Tang dynasty in the Later Jin (Five Dynasties).[24][25]

Descendants of the Tang Emperors live in Chengcun village near the Wuyi mountains in Fujian.[28]

During the Tang dynasty the Li family of Zhaojun 赵郡李氏, the Cui family of Boling 博陵崔氏, the Cui family of Qinghe 清河崔氏, the Lu family of Fanyang 范陽盧氏, the Zheng family of Xingyang 荥阳郑氏, the Wang family of Taiyuan 太原王氏, and the Li family of Longxi 隴西李氏 were the seven noble families between whom marriage was banned by law.[29] The prohibition on marriage between the clans issued in 659 by the Gaozong Emperor was flouted by the seven families since a woman of the Boling Cui married a member of the Taiyuan Wang, giving birth to the poet Wang Wei.[30] The marriages between the families were performed clandestinely after the prohibition was implemented on the seven families by Gaozong.[31]

The Zhaojun Li had many cadet lineages scattered in different areas.[32]

Other dynasties ruled by Li families

During the Five Dynasties and Ten Kingdoms period following the fall of Tang in 907, the Shatuo general Li Keyong, who had been granted the Li surname, established the Jin State, precursor of the Later Tang. Li Bian (Xu Zhigao), the founder of the Southern Tang, also changed his surname to Li. The emperors of Later Tang and Southern Tang continued the Tang tradition of liberally bestowing the Li surname on their favoured people.[6]

Other Li-surnamed dynasties include Liang, Western Xia (Tangut Empire), and Shun. All told, there have been 64 Li-surnamed emperors in Chinese history, ruling all or part of China for 650 years.[6] 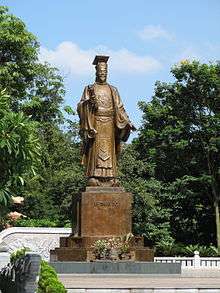 Influenced by Chinese culture, many non-Han Chinese peoples living in and near China have adopted Chinese-style names throughout history, and Li is one of the most common surnames adopted. Li has been used by the Bai people for more than 1,000 years, and is one of the top three surnames among the Bai. Li is the fifth of the twelve most common surnames of the Yao people, who adopted the name more than 800 years ago. Li also has history of 500 years among the Miao people. Among the 55 officially recognized ethnic minorities in China, 33 are known to use the Li surname.[6]

Li (spelled Lý in modern Vietnamese) has been used in Vietnam for more than 2,000 years since the Han dynasty, when Northern Vietnam was ruled as a province of the Han Empire. In 544, Vietnam gained temporary independence from China when Lý Nam Đế founded the Early Lý dynasty. Lý Nam Đế (Li Nan Di), an ethnic Chinese, is often considered the first emperor of Vietnam. In 1009, Lý Thái Tổ established the Later Lý dynasty, which ruled Vietnam for more than 200 years.[6] In 1232, after usurping the Lý dynasty, Grand Preceptor Trần Thủ Độ forced the descendants of the Lý royal family to change their surname to Nguyễn.[33]

The Koreans began using Chinese surnames during the Tang dynasty, with Li (romanized as Lee, Yi, or Rhee in Korea) being one of the top four. In 1392, Yi Seong-gye established the Joseon dynasty, which ruled Korea for more than 500 years.[6]

There are historically twelve prominent clans (junwang, 郡望) of Li, the most famous being those of the Longxi and Zhao commanderies. The Zhao clan, based in modern Hebei's Zhao County, traces its origin from Li Mu (died 229 BC), Lord Wu'an of the State of Zhao, who was one of the most famous generals of the Warring States period. The Zhao clan produced 17 prime ministers during the Tang dynasty.[34] In 2010, a group of nine large tombs of the Zhao clan were discovered in Zanhuang County, dating from the Northern Dynasties.[35]

The Zhao clan remained the most prominent branch of the Li until it was surpassed by the Longxi during the Tang dynasty. The Longxi clan is named after the Longxi Commandery in southern Gansu province. Li Chong (李崇), the first Qin governor of Longxi, is revered as its founder. The Han general Li Guang, famous for defeating the Xiongnu, came from Longxi. Centuries later, the Tang emperors traced their ancestry to the Longxi clan, making it the most prominent branch ever since.[34] The Longxi Li is considered one of the four great cultural traditions of Gansu province. Longxi County has built a museum for the Li clan, and hosted the Longxi Li cultural festival in 2012.[36] Li Bai was from this branch.

There are 2,157 genealogy books of Li families known to be extant.[2] 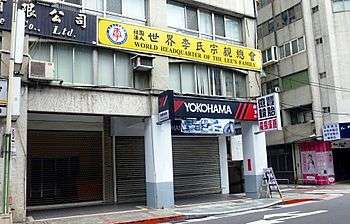 Having originated in what is now Henan province, the Lis had spread to Shanxi, Hebei, Shaanxi, Sichuan, and Hubei provinces by the end of the Warring States period. During the Qin dynasty, the Lis spread to Guangdong and Guangxi provinces, while Li Chong established the Longxi Li clan in Gansu.[2]

During the early Tang dynasty many Lis migrated to Fujian and Hainan provinces. After the mass adoption of the imperial Li surname during the Tang period, Li became the second most common surname during the subsequent Song dynasty, after Wang. There were approximately 5.6 million people with the surname, or 7.2% of the total population at the time, with large concentrations in the northern provinces of Hebei, Henan, and Shandong.[2]

The Mongol invasion of China in the 13th century caused widespread depopulation in northern China. Li, being overrepresented in the north, was hit especially hard. In the Ming dynasty following the Mongol Yuan dynasty, the Li-surnamed population had declined to 5.1 million, constituting 5.5% of the total population. It fell behind Zhang to become the third most common surname of the time. Many of the Lis had migrated to South China by this period.[2]