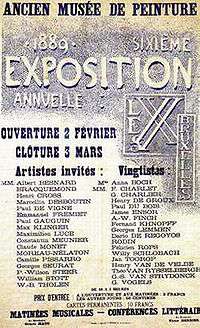 Poster of the 1889 Les XX exhibition

Les XX was in some ways a successor to the group L'Essor. The rejection of Ensor's The Oyster Eater in 1883 by L'Essor Salon, following the earlier rejection by the Antwerp Salon, was one of the events that led to the formation of Les XX.

In 1893, the society of Les XX was transformed into "La Libre Esthétique".

Les XX was founded on 28 October 1883 in Brussels and held annual shows there between 1884 and 1893, usually in January–March. The group was founded by 11 artists who were unhappy with the conservative policies of both the official academic Salon and the internal bureaucracy of L'Essor, under a governing committee of twenty members. Unlike L'Essor ('Soaring'), which had also been set up in opposition to the Salon, Les XX had no president or governing committee. Instead Octave Maus (a lawyer who was also an art critic and journalist) acted as the secretary of Les XX, while other duties, including the organization of the annual exhibitions, were dispatched by a rotating committee of three members. A further nine artists were invited to join to bring the group membership of Les XX to twenty. In addition to the exhibits of its Belgian members, foreign artists were also invited to exhibit.[1]

There was a close tie between art, music and literature among the Les XX artists. During the exhibitions, there were literary lectures and discussions, and performances of new classical music, which from 1888 were organised by Vincent d'Indy,[2] with from 1889 until the end in 1893 very frequent performances by the Quatuor Ysaÿe.[3] Concerts included recently composed music by Claude Debussy, Ernest Chausson and Gabriel Fauré. Leading exponents of the Symbolist movement who gave lectures include Stéphane Mallarmé, Théodore de Wyzewa and Paul Verlaine.[1]

Together with Maus, the influential jurist Edmond Picard and the Belgian poet Emile Verhaeren provided the driving force behind an associated periodical, L'Art Moderne, which was started in 1881. This publication aggressively defended Les XX from attacks by critics and members of the visiting public. Picard polemically fomented tensions both with the artistic establishment and within Les XX. By 1887, six of the more conservative original members had left, sometimes under pressure from Picard and Maus, to be replaced by artists who were more sympathetic to the cause. Altogether, Les XX had 32 members during the ten years of its existence.[1] 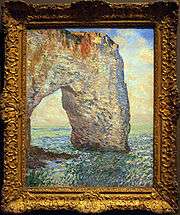 The first of ten annual exhibitions was held on 2 February at the Palais des Beaux-Arts in Brussels.[6]

Walter Sickert,[17] Camille Pissarro, Berthe Morisot and Georges-Pierre Seurat exhibit, with Seurat and Signac present at the opening.[4] The major work shown is Seurat's A Sunday Afternoon on the Island of La Grande Jatte.[5]

In July, Les XX had an exhibition in Amsterdam, The Netherlands.[11]

Auguste Villiers de l'Isle-Adam was one of the invited writers.[14]

At the first concert, the music was composed by César Franck, Pierre de Bréville, Ernest Chausson, Gabriel Fauré and Julien Tiersot. The music was played in part by the Quatuor Ysaÿe, as happened in the next few years.[3] The second concert was centered on Gabriel Fauré, with additional music by d'Indy, Charles Bordes and Henri Duparc.[3]

In July, Les XX had an exhibition in Amsterdam, The Netherlands.[11]

Three concerts were given, with the first centered on Belgian composers like Auguste Dupont, Léon Soubre, Joseph Jacob, Paul Gilson and Gustave Huberti.[3] The second and third concert focused on the French composers, with works by Fauré, Franck, d'Indy, and Castillon in the second concert. Vincent d'Indy performed his Symphonie Cévenole in the third concert.[20] Other composers whose work was performed were Fauré, Franck, Bréville, Bordes, Chausson, Albéric Magnard and Paul Vidal.[3]

Retrospective of Georges Seurat with 18 paintings, including La Cirque and La Parade.[23]

More design was exhibited, including a table by Alfred William Finch, embroidery by Henry Van de Velde, and objects by Alexandre Charpentier.[23]