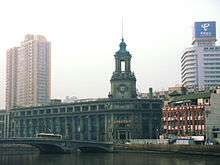 A post office is a customer service facility forming part of a national postal system.[1] Post offices offer mail-related services such as acceptance of letters and parcels; provision of post office boxes; and sale of postage stamps, packaging, and stationery. In addition, many post offices offer additional services: providing and accepting government forms (such as passport applications), processing government services and fees (such as road tax), and banking services (such as savings accounts and money orders).[2] The chief administrator of a post office is a postmaster.

Prior to the advent of postal and ZIP codes, postal systems would route items to a specific post office for receipt or delivery. In 19th-century America, this often led to smaller communities being renamed after their post offices, particularly after the Post Office Department ceased to permit duplicate station names within a state.[3] 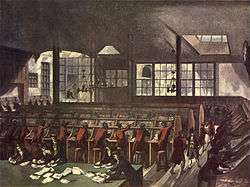 The old General Post Office on Lombard Street, London, in 1803

A Canadian sorting office in 2006

The term "post office" or "post-office"[4] has been in use since the 1650s,[5] shortly after the legalisation of private mail service in England in 1635.[6] In early Modern England, post riders – mounted couriers – were placed ("posted"[7]) every few hours along post roads at "posting houses" or "post houses" between major cities ("post towns"). These stables or inns permitted important correspondence to travel without delay. In early America, post offices were also known as "stations". This term and "post house" fell from use as horse and coach service was replaced by railways, aircraft, and automobiles.

Today, "post office" usually refers to postal facilities providing customer service. The term "General Post Office" is sometimes used for the national headquarters of a postal service, even if it does not provide customer service within the building. A postal facility used exclusively for processing mail is instead known as sorting office or delivery office, which may have a large central area known as a "sorting" or "postal hall". Integrated facilities combining mail processing with railway stations or airports are known as mail exchanges.

There is evidence of corps of royal couriers disseminating the decrees of the Egyptian pharaohs as early as 2,400 BC and the service may greatly precede even that date. Similarly, organized systems of posthouses providing swift mounted courier service seems quite ancient, although sources vary as to precisely who initiated the practice.[8] Certainly, by the time of the Persian Empire, a system of Chapar-Khaneh existed along the Royal Road. The 2nd-Century BC Mauryan and Han dynasties established similar systems in India and China. Suetonius credited Augustus with regularizing the Roman network, the cursus publicus. Local officials were obliged to provide couriers who would be responsible for their message's entire course. Locally maintained post houses (Latin: stationes) privately owned rest houses (Latin: mansiones) were obliged or honored to care for them along their way. Diocletian later established two parallel systems: one providing fresh horses or mules for urgent correspondence and another providing sturdy oxen for bulk shipments. Procopius, though not unbiased, records that this system remained largely intact was dismantled in the surviving empire by Justinian in the 6th Century.

The Princely House of Thurn and Taxis initiated regular mail service from Brussels in the 16th century, directing the Imperial Post of the Holy Roman Empire. The British Postal Museum claims that the oldest functioning post office in the world is on High Street in Sanquhar, Scotland . This post office has functioned continuously since 1712, an era in which horses and stage coaches were used to carry mail.

In parts of Europe, special postal censorship offices existed to intercept and censor mail. In France, such offices were known as cabinets noirs.

The Inland Letter Office of the London GPO in 1845.

In many jurisdictions, mail boxes and post office boxes have long been in widespread use for dropoff and pickup (respectively) of mail and small packages outside of post offices or when offices are closed. Deutsche Post introduced the Packstation for package delivery (both dropoff and pickup) in 2001. In the 2000s, the United States Postal Service began to install Automated Postal Centers (APCs) in many locations both in post offices (for when they are closed or busy) and in retail locations.[9] APCs can print postage and accept mail and small packages.