LexisNexis Group is a corporation providing computer-assisted legal research as well as business research and risk management services.[2][3] During the 1970s, LexisNexis pioneered the electronic accessibility of legal and journalistic documents.[4] As of 2006, the company has the world's largest electronic database for legal and public-records related information.[5] 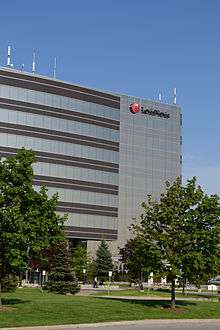 Currently a division of RELX Group (formerly Reed Elsevier),[6] LexisNexis was first a product of the Mead Data Central company.[3][5]

The Anglo-Dutch publishing company Reed Elsevier has owned LexisNexis and its predecessor company since 1994. At its inception in 1970, the database was named LEXIS by Mead Data Central (MDC), a subsidiary of the Mead Corporation. It was a continuation of an experiment organized by the Ohio State Bar in 1967.

When Toyota launched the Lexus line of luxury vehicles in 1987, Mead Data Central sued for trademark infringement on the grounds that consumers of upscale products (such as lawyers) would confuse "Lexus" with "Lexis". A market research survey asked consumers to identify the spoken word "Lexis". Survey results showed that a nominal number of people thought of the computerized legal search system; a similarly small number thought of Toyota's luxury car division.[9] A judge ruled against Toyota, and the company appealed the decision.[10][11] Mead lost on appeal in 1989 when the Court of Appeals for the 2nd Circuit held that there was little chance of consumer confusion.[12] Today, the two companies have an amicable business relationship, and in 2002 implemented a joint promotion called "Win a Lexus on Lexis!"

In December 1994, Mead sold the LexisNexis system to Reed Elsevier for $1.5 billion. The U.S. state of Illinois subsequently audited Mead's income tax returns and charged Mead an additional $4 million in income tax and penalties for the sale of LexisNexis; Mead paid the tax under protest, then sued for a refund in an Illinois state court. On April 15, 2008, the U.S. Supreme Court agreed with Mead that the Illinois courts had incorrectly applied the Court's precedents on whether Illinois could constitutionally apply its income tax to Mead, an out-of-state, Ohio-based corporation.[13] The Court reversed and remanded so that the lower courts could apply the correct test and determine whether Mead and Lexis were a "unitary" business.

On March 9, 2005, LexisNexis announced the possible theft of personal information of some Seisint users. It was originally estimated that 32,000 users were affected,[16] but that number greatly increased to over 310,000.[17] Affected persons were provided with free fraud insurance and credit bureau reports for a year. However, no reports of identity theft or fraud were discovered to have stemmed from the security breach.

According to a company news release, LexisNexis hosts over 30 terabytes of content on its 11 mainframes (supported by over 300 midrange UNIX servers and nearly 1,000 Windows NT servers) at its main datacenter in Miamisburg, Ohio.[21] The Lexis database contains current United States statutes and laws and a large volume of published case opinions dating from the 1770s to the present, as well as publicly available unpublished case opinions from 1980 on. In 2000, Lexis began building a library of briefs and motions.[22] In addition to this, Lexis also has libraries of statutes, case judgments and opinions for jurisdictions such as France, Australia, Canada, Hong Kong, South Africa and the United Kingdom as well as databases of law review and legal journal articles for countries for which materials are available.

Previously, LexisNexis had a stripped-down free version (known as LexisOne) but this has been discontinued and replaced by Lexis Communities,[23] which provides news and blogs across a variety of legal areas.

In France, the UK and Australia, LexisNexis publishes books, magazines and journals, both in hard copy and online. Titles include Taxation Magazine and Lawyers Weekly.

LexisNexis UK was founded in 1818 by Henry Butterworth.[24] Henry Butterworth (1786–1860) was a pupil at King Henry VIII School, Coventry. After leaving Coventry he was apprenticed to and, for some time, worked for his uncle Joseph Butterworth, the great law bookseller of Fleet Street. In 1818, however, disagreement between them as to the terms of partnership made Henry set up on his own account at the corner of Middle Temple Gate (7 Fleet Street), where he became the well-known Queen's Law Bookseller.

The Butterworths publishing business is now owned and operated in the UK by Reed Elsevier (UK) Ltd, a company in the Reed Elsevier Group. Publications continue to be produced by RELX (UK) Ltd using the "LexisNexis", "Butterworths" and "Tolley" trade marks. Such publications include Halsbury's Laws of England and the All England Law Reports, amongst others.

The Butterworths name is also used to publish works in many countries such as Canada, South Africa, Australia and New Zealand.

InterAction is a customer relationship management system designed specifically for professional services firms such as accountancy and legal firms.[25]

In 2013, LexisNexis, together with Reed Elsevier Properties SA, acquired publishing brands and businesses of Sheshunoff and A.S. Pratt from Thompson Media Group.[29]

Sheshunoff Information Services, A.S. Pratt,[30] & Alex Information (collectively, SIS), founded in 1972,[31] is a print and electronic publishing company that provides information to financial and legal professionals in the banking industry, as well as online training and tools[32] for financial institutions. SIS was founded in 1971 by Alex and Gabrielle Sheshunoff. The company became recognized for providing guidance and analysis to the banking industry. In 1988 Thomson Media, a division Thomson Reuters, acquired the company. Separately, the Sheshunoffs began publishing Alex Information products.

In 1995 SIS acquired A.S. Pratt & Sons. Established in 1933, Pratt's Letter is believed to be the second oldest continuously published newsletter in the country behind Kiplinger's Washington Letter, which began publication in 1923. A.S. Pratt is a provider of regulatory law and compliance work tools for the financial services industry.[33]

Gabrielle Sheshunoff returned in 2004 to unite the AlexInformation, Sheshunoff, and A.S. Pratt brands before it was sold to Thompson in 2008.[34]