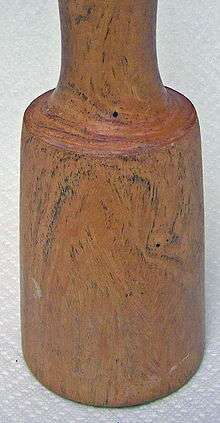 Mallet of lignum vitae, all sapwood 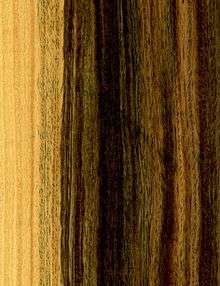 Lignum vitae is a trade wood, also called guayacan or guaiacum,[1] and in parts of Europe known as pockholz, from trees of the genus Guaiacum. The trees are indigenous to the Caribbean and the northern coast of South America and have been an important export crop to Europe since the beginning of the 16th century. The wood was once very important for applications requiring a material with its extraordinary combination of strength, toughness, and density. It is also the national tree of the Bahamas and the Jamaican national flower.[2]

The wood is obtained chiefly from Guaiacum officinale and Guaiacum sanctum, both small, slow growing trees. All species of the genus Guaiacum are now listed in Appendix II of CITES (the Convention on International Trade in Endangered Species of Wild Fauna and Flora) as potentially endangered species. Demand for the wood has been reduced by modern materials science, which has led to polymer, alloys and composite materials that can take lignum vitae's place.

"Lignum vitae" is Latin for "wood of life", and derives its name from its medicinal uses; lignum vitae resin has been used to treat a variety of medical conditions from coughs to arthritis, and chips of the wood can also be used to brew a tea. Other names for lignum vitae include palo santo (Spanish for "holy wood") and "bastard greenheart" (not to be confused with true Greenheart Chlorocardium rodiei, a popular wood in shipbuilding, cabinetry, and woodturning but a completely different timber); lignum vitae is also one of the numerous hard, dense woods loosely referred to as ironwood.

Lignum vitae is hard and durable, and is also the densest wood traded (density: 1.23 g/cm3);[3] it will easily sink in water. On the Janka Scale of Hardness, which measures hardness of woods, lignum vitae ranks highest of the trade woods, with a Janka hardness of 4500 lbf (compared with African Blackwood at 2940 lbf, Hickory at 1820 lbf, red oak at 1290 lbf, Yellow Pine at 690 lbf, and Balsa at 100 lbf).

Various other hardwoods may also be called lignum vitae and should not be confused with it. The best-known come from Bulnesia arborea and Bulnesia sarmientoi (in the same subfamily as Guaiacum) and are known as Verawood or Argentine lignum vitae; they are somewhat similar in appearance and working qualities as genuine lignum vitae. Some hardwoods from Australasia (e.g., Vitex lignum-vitae and some species of Acacia and Eucalyptus) are also referred to as lignum vitae.

Due to the density of the wood, cricket bails, in particular "heavy bails" used in windy conditions, are sometimes made of lignum vitae. It is also sometimes used to make lawn bowls, croquet mallets, and skittles balls. The wood also has seen widespread historical usage in mortars and pestles and for wood carvers' mallets.

It was the traditional wood used for the British police truncheon until recently, due to its density (and strength), combined with the relative softness of wood compared to metal, thereby tending to bruise or stun rather than simply cut the skin.

The belaying pins and deadeyes aboard USS Constitution and many other sailing ships were made from lignum vitae. Due to its density and natural oils, they rarely require replacement, despite the severity of typical marine weathering conditions. The sheaves of blocks on sailing vessels were made of lignum vitae until the introduction of modern synthetics.

Due to lignum vitae's toughness, it can also be used as a lap in the process of cutting gems. The wood is covered with powdered industrial diamond, attached to a spindle, and used to smooth rough surfaces of gems.

Master clockmaker John Harrison used lignum vitae in the bearings and gears of his pendulum clocks and his first three marine chronometers (all of which were large clocks rather than watches), since the wood is self-lubricating. The use of lignum vitae eliminates the need for horological lubricating oil; 18th-century horological oil would get gummy and reduce the accuracy of a timepiece under unfavourable conditions (including those that prevail at sea).

For the same reason it was widely used in water-lubricated shaft bearings for ships and hydro-electric power plants,[4] and in the stern-tube bearings of ship propellers [5] until the 1960s saw the introduction of sealed white metal bearings. According to the San Francisco Maritime National Park Association website, the shaft bearings on the WWII submarine USS Pampanito (SS-383) were made of this wood.[6] The aft main shaft strut bearings for USS Nautilus (SSN-571), the world's first nuclear-powered submarine, were composed of this wood. Also, the bearings in the original 1920s turbines of the Conowingo hydroelectric plant on the lower Susquehanna River were made from lignum vitae. The shaft bearings on the horizontal turbines at the Pointe du Bois generating station in Manitoba are made from lignum vitae. Other hydroelectric plant turbine bearings, many of them still in service, were fabricated with lignum vitae and are too numerous to list here.[7]

The United Railroads of San Francisco (an ancestor of the San Francisco Municipal Railway) began installing lignum vitae insulators to support heavy feeder wires for their trolley system in 1904. The reason for the adoption of lignum vitae was its ability to withstand the high stress at high temperature, a problem posed by heavy cables turning corners heated by high current overloads. Many of these insulators survived the 1906 earthquake and fires, despite temperatures high enough to soften the iron poles and melt the copper cables.[8][9] Many of these lasted into the 1970s with a small number remaining in service into the first decade of the 2000s (most of these came down when the overhead 600 V DC feeders were replaced with a new system of underground feeders, the rest coming out of service as aging crossarms supporting the remaining overhead feeders were replaced). 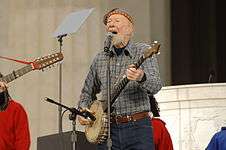 Pioneering calypsonian/vaudevillian Sam Manning recorded a song entitled "Lignum Vitae" in the 1920s.[10] His reference was doubly salacious, referring to both the bark tea's contraceptive qualities and the phallic symbolism of the hard wood.

According to T. H. White's version of the King Arthur story The Once and Future King, lignum vitae, from which the wand of Merlin is made, has magical powers.

Gabriel García Márquez's novel Love in the Time of Cholera includes a bathtub made of this wood in one of the main characters' homes. His novel Chronicle of a Death Foretold also refers to the use of this wood in making a cane for the blind Poncio Vicario.

In Charles Dickens' novel Bleak House, one of the characters, Matthew Bagnet is referred to as lignum vitae, "... in compliment to the extreme hardness and toughness of his physiognomy."