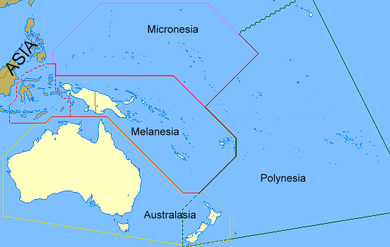 Regions of Oceania. New Zealand is considered as part both of Australasia and of Polynesia. Varying amounts of Melanesia (traditionally all of it) also count as part of Australasia.

Australasia, a region of Oceania, comprises Australia, New Zealand, the island of New Guinea, and neighbouring islands in the Pacific Ocean. Charles de Brosses coined the term (as French Australasie) in Histoire des navigations aux terres australes[1] (1756). He derived it from the Latin for "south of Asia" and differentiated the area from Polynesia (to the east) and the southeast Pacific (Magellanica).[2] The bulk of Australasia sits on the Indo-Australian Plate, together with India.

Physiographically, Australasia includes New Zealand, Australia (including Tasmania), and Melanesia: New Guinea and neighbouring islands north and east of Australia in the Pacific Ocean. The designation is sometimes applied to all the lands and islands of the Pacific Ocean lying between the equator and latitude 47° south.

Geopolitically, Australasia sometimes refers to Australia and New Zealand together – in the absence of another word limited to those two countries; however, the two countries are sometimes referred to collectively as the Antipodes. Sometimes the term also encompasses the island of New Guinea (Papua New Guinea and the Indonesian part of the island). Many organisations whose names include the prefix "[Royal] Australasian Society of ..." limit their scope of operation to just Australia and New Zealand.

In the past, Australasia has been used as a name for combined Australia/New Zealand sporting teams. Examples include tennis between 1905 and 1915, when New Zealand and Australia combined to compete in the Davis Cup international tournament, and at the Olympic Games of 1908 and 1912. 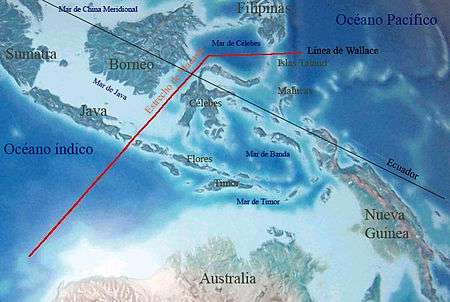 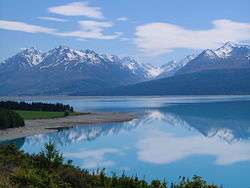 From an ecological perspective the Australasia ecozone forms a distinct region with a common geologic and evolutionary history and a great many unique flora and fauna. In this context, Australasia is limited to Australia, New Guinea, New Zealand, New Caledonia, and neighbouring islands, including the Indonesian islands from Lombok and Sulawesi eastward. The Wallace Line marks the biological divide from the Indomalaya ecozone of tropical Asia – Borneo and Bali lie on the western, Asian side.

Australia, New Zealand and New Caledonia are all fragments of the ancient supercontinent Gondwana, the marks of which are still visible in the Christmas Island Seamount Province and other geophysical entities. These three land masses have been separated from other continents, and from one another, for millions of years. All of Australasia shares the Antarctic flora, although the northern, tropical islands also share many plants with Southeast Asia.

Mainland Australia, New Guinea and Tasmania are separated from one another by shallow continental shelves, and were linked together when the sea level was lower during the Ice Ages. They share a similar fauna which includes marsupial and monotreme mammals and ratite birds. Eucalypts are the predominant trees in much of Australia and New Guinea. New Zealand has no extant native land mammals aside from bats (though it once did), but also had ratite birds, including the kiwi and the extinct moa. The Australasia ecozone includes some nearby island groups, like Wallacea, the Bismarck Archipelago, Solomon Islands, and Vanuatu, which were not formerly part of Gondwana, but which share many characteristic plants and animals with Australasia.