A limited liability partnership (LLP) is a partnership in which some or all partners (depending on the jurisdiction) have limited liabilities. It therefore exhibits elements of partnerships and corporations.[1] In an LLP, one partner is not responsible or liable for another partner's misconduct or negligence. This is an important difference from the traditional unlimited partnership under the Partnership Act 1890 (for the UK), in which each partner has joint and several liability. In a LLP, some partners have a form of limited liability similar to that of the shareholders of a corporation.[2] In some countries, an LLP must also have at least one thing called as a "general partner" with unlimited liability. Unlike corporate shareholders, the partners have the right to manage the business directly. In contrast, corporate shareholders have to elect a board of directors under the laws of various state charters. The board organizes itself (also under the laws of the various state charters) and hires corporate officers who then have as "corporate" individuals the legal responsibility to manage the corporation in the corporation's best interest. A LLP also contains a different level of tax liability from that of a corporation.

For a fuller country-by-country listing of types of partnerships and companies, see Types of business entity.

In China, the LLP is known as a Special general partnership (特殊普通合伙). The organizational form is restricted to knowledge-based professions and technical service industries. The structure shields co-partners from liabilities due to the willful misconduct or gross negligence of one partner or a group of partners.

The German Partnerschaftsgesellschaft or PartG is an association of non-commercial professionals, working together. Though not a corporate entity, it can sue and be sued, own property and act under the partnership's name. The partners, however, are jointly and severally liable for all the partnership's debts, except when only some partners' misconduct caused damages to another party — and then only if professional liability insurance is mandatory. Another exception possible since 2012 is a Partnerschaftsgesellschaft mbB (mit beschränkter Berufshaftung) where all liabilities from professional misconduct are limited by the partnerships capital.

The Partnerschaftsgesellschaft is not subject to corporate or business tax, only its partners' respective income is taxed.

An LLP is an approximate equivalent to the Greek ΕΠΕ (Εταιρεία Περιορισμένης Ευθύνης Etería Periorisménis Evthínis Company of Limited Liability). In an ΕΠΕ the partners own personal shares that can be sold by a partner only when all other partners agree. The business management can be exercised either directly by the board of partners or by a General Manager. In the aspect of liability, an ΕΠΕ is identical to an LLP.

2. There is no maximum limit for the no. of partners in LLP. In the private limited company shareholders are limited to the extent of 200 shareholders.

3. Raising and utilization of funds depends on the partners will. Funds can be bought and utilized only as per the norms listed under the Companies Act, 2013.

4. LLP is exempt of Dividend Distribution Tax (DDT). Company has to pay DDT on dividend distribution.[8]

LLPs as well have some limitations within. Some of them can be summarized as below.

Limited liability partnerships (有限責任事業組合, yūgen sekinin jigyō kumiai) were introduced to Japan in 2006 during a large-scale revamp of the country's laws governing business organizations. Japanese LLPs may be formed for any purpose (although The purpose must be clearly stated in the partnership agreement and cannot be general), have full limited liability and are treated as pass-through entities for tax purposes. However, each partner in an LLP must take an active role in the business, so the model is more suitable for joint ventures and small businesses than for companies in which investors plan to take passive roles.[10][11] Japanese LLPs may not be used by lawyers or accountants, as these professions are required to do business through an unlimited liability entity.[12]

A Japanese LLP is not a corporation,[13] but rather exists as a contractual relationship between the partners, similarly to an American LLP. Japan also has a type of corporation with a partnership-styled internal structure, called a godo kaisha, which is closer in form to a British LLP or American limited liability company.

The concept of LLP exists in Kazakhstan law. All partners in a Kazakhstan LLP have limited liability, and they are liable for the debts of the partnership to the extent of the value of their corresponding participatory interests in the partnership. The names for LLP in Kazakhstan are "ЖШС" (which stands for Жауапкершілігі шектеулі серіктестік Zhawapkershiligi shektewli seriktestik) in Kazakh and "ТОО" (which stands for Товарищество с ограниченной ответственностью Tovarishchestvo s ogranichennoy otvyetstvyennostʼyu) in Russian. This is the most popular business form in Kazakhstan. Almost any private business may be incorporated as an LLP (notable exceptions are banks, airlines, insurance companies, and mortgage companies, which must be incorporated in the form of a joint stock company). An LLP in Kazakhstan is a corporate body, and in fact, is an LLC. Partners cannot conduct business on its own, and it's the corporate body that conducts the business. There is also a concept of "simple partnership" in Kazakhstan law, which corresponds more to the general concept of partnership, but it is not widely used and is not well developed in Kazakhstan.

A close equivalent to limited liability partnerships under Polish law is the spółka partnerska, where all partners are jointly and severely liable for partnership's debts apart from those arising from another partner's misconduct or negligence. This partnership type is only addressed to representatives of some "high risk" occupations, such as lawyers, medicine doctors, tax advisers, accountants, brokers, sworn translators etc.

An LLP is equivalent to the Romanian law vehicle known as a Societate civilă profesională cu răspundere limitată.

LLPs are formed under the Limited Liability Partnerships Act 2005. This legislation draws on both the US and UK models of LLP, and like the latter establishes the LLP as a body corporate. However, for tax purposes it is treated like a general partnership, so that the partners rather than the partnership are subject to tax (tax transparency).

In the United Kingdom LLPs are governed by the Limited Liability Partnerships Act 2000 (in Great Britain) and the Limited Liability Partnerships Act (Northern Ireland) 2002 in Northern Ireland. A UK limited liability partnership is a corporate body - that is to say, it has a continuing legal existence independent of its members, as compared to a Partnership which may (in England and Wales, does not) have a legal existence dependent upon its membership.

A UK LLP's members have a collective ("Joint") responsibility, to the extent that they may agree in an "LLP agreement", but no individual ("several") responsibility for each other's actions. As with a limited company or a corporation, members in an LLP cannot, in the absence of fraud or wrongful trading, lose more than they invest.

In relation to tax, however, a UK LLP is similar to a partnership, namely, it is tax-transparent, that is to say it pays no UK corporation tax or capital gains tax. Instead, LLP income and/or gains are distributed gross to partners as self-employed persons, rather than as PAYE employees. Partners receiving income and/or gains from an LLP are liable for their own taxation.

It is a unique entity in its synthesis of collective and individual rights and responsibilities and its flexibility — there is in fact no requirement for the LLP agreement even to be in writing because simple partnership-based regulations apply by way of default provisions.

It has to date been closely replicated by Japan — see above — and by the financial centres of Dubai and Qatar. It is perhaps closest in nature to a limited liability company in the United States of America although it may be distinguished from that entity by the fact that the LLC, while having a legal existence independent of its members is not technically a corporate body because its legal existence is time limited and therefore not "continuing."

The LLP structure is commonly used by accountants to retain the tax structure of traditional partnerships whilst adding some limited liability protection. LLPs are also becoming more common among firms in the legal profession such as solicitors although they are permitted to use a limited company structure.[14] 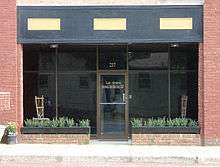 Example of a LLP-Office in the State of Georgia (U.S.)

In the United States, each individual state has its own law governing their formation. Limited liability partnerships emerged in the early 1990s: while only two states allowed LLPs in 1992, over forty had adopted LLP statutes by the time LLPs were added to the Uniform Partnership Act in 1996.[15]

The limited liability partnership was formed in the aftermath of the collapse of real estate and energy prices in Texas in the 1980s. This collapse led to a large wave of bank and savings and loan failures. Because the amounts recoverable from the banks were small, efforts were made to recover assets from the lawyers and accountants that had advised the banks in the early 1980s. The reason was that partners in law and accounting firms were subject to the possibility of huge claims which would bankrupt them personally, and the first LLP laws were passed to shield innocent members of these partnerships from liability.[16]

Although found in many business fields, the LLP is an especially popular form of organization among professionals, particularly lawyers, accountants, and architects. In some U.S. states, namely California, New York, Oregon, and Nevada, LLPs can only be formed for such professional uses.[17] Formation of an LLP typically requires filing certificates with the county and state offices. Although specific rules vary from state to state, all states have passed variations of the Revised Uniform Partnership Act.

The liability of the partners varies from state to state. Section 306(c) of the Revised Uniform Partnership Act (1997)(RUPA) (a standard statute adopted by a majority of the states) grants LLPs a form of limited liability similar to that of a corporation:

However, a sizable minority of states only extend such protection against negligence claims, meaning that partners in an LLP can be personally liable for contract and intentional tort claims brought against the LLP.[18] While Tennessee and West Virginia have otherwise adopted RUPA, their respective adoptions of Section 306 depart from the uniform language, and only a partial liability shield is provided.[19]

As in a partnership or limited liability company (LLC), the profits of an LLP are allocated among the partners for tax purposes, avoiding the problem of "double taxation" often found in corporations.

Some US states have combined the LP and LLP forms to create limited liability limited partnerships.