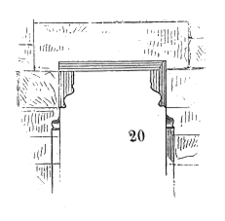 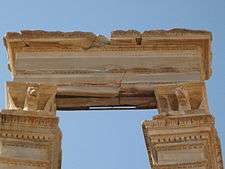 A lintel is a structural horizontal block that spans the space or opening between two vertical supports.[1] It can be a decorative architectural element, or a combined ornamented structural item. It is often found over portals, doors, windows, and fireplaces.

In worldwide architecture of different eras and many cultures, a lintel has been an element of post and lintel construction. Many different building materials have been used for lintels. [1]

In classical western construction methods, defining lintel by its Merriam-Webster definition, a lintel is a load-bearing member and is placed over an entranceway.[1] In ancient Western classical architecture, the lintel, called an architrave, is a structural element that is usually rested on stone pillars or stacked stone columns, over a portal or entranceway. An example from the Mycenaean Greece cultural period (c. 1600 BCE – c. 1100 BCE) is the Treasury of Atreus in Mycenae, Greece. It weighs 120 tons, with approximate dimensions 8.3 × 5.2 × 1.2 m,[2] one of the largest in the world.

A lintel in a fireplace supports the chimney above the fireplace, and a stone lintel bridge is simply a lintel which spans a distance for a path or road. 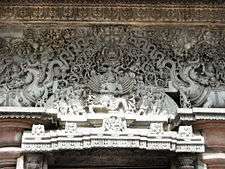 The use of the lintel form as a decorative building element over portals, with no structural function, has been employed in the architectural traditions and styles of most cultures over the centuries.

Examples of the ornamental use of lintels are in the hypostyle halls and slab stelas in ancient Egypt and the Indian rock-cut architecture of Buddhist temples in caves. Preceding prehistoric and subsequent Indian Buddhist temples were wooden buildings with structural load-bearing wood lintels across openings. The rock-cut excavated cave temples were more durable, and the non-load-bearing carved stone lintels allowed creative ornamental uses of classical Buddhist elements. Highly skilled artisans were able to simulate the look of wood, imitating the nuances of a wooden structure and the wood grain in excavating cave temples from monolithic rock.[3] In freestanding Indian building examples, the Hoysala architecture tradition between the 11th and 14th centuries produced many elaborately carved non-structural stone lintels in the Southern Deccan Plateau region of southern India. The Hoysala Empire era was an important period in the development of art and architectural the South Indian Kannadigan culture. It is remembered today primarily for its Hindu temples' mandapa, lintels, and other architectural elements, such as at the Chennakesava Temple.

The Maya civilization in the Americas was known for its sophisticated art and monumental architecture. The Mayan city of Yaxchilan, on the Usumacinta River in present-day southern Mexico, specialized in the stone carving of ornamental lintel elements within structural stone lintels. The earliest carved lintels were created in 723 CE. At the Yaxchilan archaeological site there are fifty-eight lintels with decorative pieces spanning the doorways of major structures. Among the finest Mayan carving to be excavated are three temple door lintels that feature narrative scenes of a queen celebrating the king's anointing by a god.[4]