A fireplace is a structure made of brick, stone or metal designed to contain a fire. Fireplaces are used for the relaxing ambiance they create and for heating a room. Modern fireplaces have variable heat efficiency, depending on the sophistication of the design.

Historically they were used for heating a dwelling, cooking, and heating water for laundry and domestic uses. A fire is contained in a firebox or firepit; a chimney or other flue allows exhaust to escape. A fireplace may have: a foundation; a hearth; a firebox; a mantelpiece; a chimney crane, used in kitchen and laundry fireplaces; a grate; a lintel; a lintel bar; overmantel; a damper; a smoke chamber; a throat; and a flue.

On the exterior there is often a corbeled brick crown, in which the projecting courses of brick act as a drip course to keep rainwater from running down the exterior walls. A cap, hood, or shroud serves to keep rainwater out of the exterior of the chimney; rain in the chimney is a much greater problem in chimneys lined with impervious flue tiles or metal liners than with the traditional masonry chimney, which soaks up all but the most violent rain. Some chimneys have a spark arrestor incorporated into the crown or cap.

Organizations like the Environmental Protection Agency and the Washington Department of Ecology warn that, according to various studies, fireplaces can pose a significant health risk.[1][2] The EPA writes "Smoke may smell good, but it's not good for you."[1]

Masonry and prefabricated fireplaces can be fueled by wood, natural gas, biomass and propane fuel sources. Ventless Fireplaces (duct free/room-venting fireplaces) are fueled by either gel, liquid propane, bottled gas or natural gas. In the United States, some states and local counties have laws restricting these types of fireplaces. They must be properly sized to the area to be heated.[3] There are also air quality control issues due to the amount of moisture they release into the room air, and oxygen sensor and carbon monoxide sensors are safety essentials. Direct vent fireplaces are fueled by either liquid propane or natural gas. They are completely sealed from the area that is heated, and vent all exhaust gasses to the exterior of the structure.

Newly constructed flues may feature a chase cover, a cap, and a spark arrestor at the top to keep small animals out and to prevent sparks from being broadcast into the atmosphere. All fireplaces require trained gas service members to carry out installations.

A wide range of accessories are used with fireplaces, which range between countries, regions, and historical periods. For the interior, common in recent Western cultures include grates, fireguards, log boxes, andirons, pellet baskets, and fire dogs, all of which cradle fuel and accelerate burning. A grate (or fire grate) is a frame, usually of iron bars, to retain fuel for a fire. Heavy metal firebacks are sometimes used to capture and re-radiate heat, to protect the back of the fireplace, and as decoration. Fenders are low metal frames set in front of the fireplace to contain embers, soot and ash. For fireplace tending, tools include pokers, bellows, tongs, shovels, brushes and tool stands. 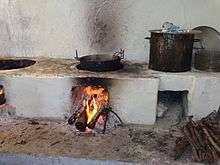 Cooking over a fireplace

Ancient fire pits were sometimes built in the ground, within caves, or in the center of a hut or dwelling. Evidence of prehistoric, man-made fires exists on all five inhabited continents. The disadvantage of early indoor fire pits was that they produced toxic and/or irritating smoke inside the dwelling.

Fire pits developed into raised hearths in buildings, but venting smoke depended on open windows or holes in roofs. The medieval great hall typically had a centrally located hearth, where an open fire burned with the smoke rising to the vent in the roof. Louvers were developed during the Middle Ages to allow the roof vents to be covered so rain and snow would not enter.

Also during the Middle Ages, smoke canopies were invented to prevent smoke from spreading through a room and vent it out through a wall or roof. These could be placed against stone walls, instead of taking up the middle of the room, and this allowed smaller rooms to be heated.

Chimneys were invented in northern Europe in the 11th or 12th centuries and largely fixed the problem of fumes, more reliably venting smoke outside. They made it possible to give the fireplace a draft, and also made it possible to put fireplaces in multiple rooms in buildings conveniently. They did not come into general use immediately, however, as they were expensive to build and maintain.

In 1678 Prince Rupert, nephew of Charles I, raised the grate of the fireplace, improving the airflow and venting system. The 18th century saw two important developments in the history of fireplaces. Benjamin Franklin developed a convection chamber for the fireplace that greatly improved the efficiency of fireplaces and wood stoves. He also improved the airflow by pulling air from a basement and venting out a longer area at the top. In the later 18th century, Count Rumford designed a fireplace with a tall, shallow firebox that was better at drawing the smoke up and out of the building. The shallow design also improved greatly the amount of radiant heat projected into the room. Rumford's design is the foundation for modern fireplaces.

Victorian style "sitting room" with a fireplace in the Sherlock Holmes Museum, London

Over time the design of fireplaces has changed from one of necessity to one of visual interest. Early ones were more fire pits than modern fireplaces. They were used for warmth on cold days and nights, as well as for cooking. They also served as a gathering place within the home. These fire pits were usually centered within a room, allowing more people to gather around it.

Many flaws were found in early fireplace designs. Along with the industrial revolution came large scale housing developments, necessitating a standardization of fireplaces. The most renowned fireplace designers of this time were the Adam Brothers. They perfected a style of fireplace design that was used for generations. It was smaller, more brightly lit, with an emphasis on the quality of the materials used in their construction, instead of their size.

By the 1800s most new fireplaces were made up of two parts, the surround and the insert. The surround consisted of the mantlepiece and sides supports, usually in wood, marble or granite. The insert was where the fire burned, and was constructed of cast iron often backed with decorative tiles. As well as providing heat, the fireplaces of the Victorian era were thought to add a cozy ambiance to homes.[4]

An infographic has been created in order to visualise the data, from starting fire pits to modern fireplaces.[5] 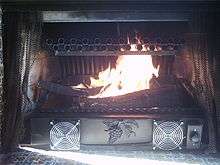 Fireplace with tubular grate heater, with a high surface area in its heat exchanger and a lift out ash tray to simplify cleanup

Some fireplace units incorporate a blower which transfers more of the fireplace's heat to the air via convection, resulting in a more evenly heated space and a lower heating load. Fireplace efficiency can also be increased with the use of a fireback, a piece of metal that sits behind the fire and reflects heat back into the room. Firebacks are traditionally made from cast iron, but are also made from stainless steel.[6] Efficiency is a complicated concept though with open hearth fireplaces. Most efficiency tests consider just the effect of heating of the air. An open fireplace is not, and never was, intended to heat the air. A fireplace with a fireback is a radiant heater, and has done so since the 15th century. The best way to gauge the output of a fireplace is if you notice you're turning the thermostat up or down.

Most older fireplaces have a relatively low efficiency rating. Standard, modern, wood-burning masonry fireplaces though have an efficiency rating of at least 80% (legal minimum requirement for example in Salzburg/Austria).[7] To improve efficiency, fireplaces can also be modified by inserting special heavy fireboxes designed to burn much cleaner and can reach efficiencies as high as 80% in heating the air. These modified fireplaces are often equipped with a large fire window, enabling an efficient heating process in two phases. During the first phase the initial heat is provided through a large glass window while the fire is burning. During this time the structure, built of refractory bricks, absorbs the heat. This heat is then evenly radiated for many hours during the second phase. Masonry fireplaces without a glass fire window only provide heat radiated from its surface. Depending on outside temperatures 1 to 2 daily firings are sufficient to ensure a constant room temperature.

In a literature review published in the journal of Toxicology and Environmental Health, J.T. Zelikoff concludes that there are a wide variety of health risks posed by residential wood combustion. She writes:

The Washington Department of Ecology also published a booklet explaining why wood smoke can be dangerous. It explains that human lung and respiratory systems are unable to filter particles emitted by wood combustion, which penetrate deeply into the lungs. For months, cancer causing chemicals can continue to cause changes and structural damage within the respiratory system. Young children, seniors, pregnant women, smokers and individuals with respiratory disorders are most vulnerable. Wood smoke can cause disease and even death in children because it is associated with lower respiratory tract infections.[2] Home fireplaces have caused fatal carbon monoxide poisoning.[9]

Several of these terms may be compounded with chimney or fireplace such as chimney-back. 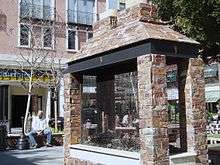