After failing to find a contract for 2013,[1] Gerdemann joined MTN–Qhubeka for the 2014 season.[2] As of 2015 he rides for Danish professional continental team Cult Energy-Vital Water.[3] 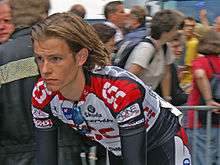 Gerdemann at the 2005 HEW Cyclassics

After riding on amateur teams Team Winfix and Team AKUD Arnolds Sicherheit, in 2005 he became a professional rider for Team CSC after a recommendation from Dennis Kraft, signing on for a 2-year contract. In his first year as a pro, he won the 7th stage of the UCI ProTour race Tour de Suisse and had the leader's jersey in Four Days of Dunkirk.

In late 2005 he agreed to a contract with rival UCI ProTour T-Mobile Team, starting from 2006. This got Team CSC owner Bjarne Riis to release Gerdemann from his contract at the end of 2005.

In March 2008 he sustained injuries from a crash in the Tirreno–Adriatico and was unable to race in the 2008 Tour de France or the Beijing summer Olympics.[4] He came back from his injuries to win the Deutschland Tour in August 2008.