Litany, in Christian worship and some forms of Judaic worship, is a form of prayer used in services and processions, and consisting of a number of petitions. The word comes through Latin litania from Ancient Greek λιτανεία (litaneía), which in turn comes from λιτή (litê), meaning "supplication".

For the "Litany" as used in the Eastern Orthodox and Eastern Catholic Churches, see Ektenia.

The frequent repetition of the Kyrie was probably the original form of the Litany, and was in use in Asia and in Rome at a very early date. The Council of Vaison in 529 passed the decree: "Let that beautiful custom of all the provinces of the East and of Italy be kept up, viz., that of singing with great effect and compunction the 'Kyrie Eleison' at Mass, Matins, and Vespers, because so sweet and pleasing a chant, even though continued day and night without interruption, could never produce disgust or weariness".

The number of repetitions depended upon the celebrant. This litany is prescribed in the Roman breviary at the "Preces Feriales" and in the Monastic Breviary for every "Hora" (Rule of St. Benedict, ix, 17). The continuous repetition of the "Kyrie" is used to-day at the consecration of a church, while the relics to be placed in the altar are carried in procession around the church. Because the "Kyrie" and other petitions were said once or oftener, litanies were called planæ, ternæ, quinæ, septenæ.

Public Christian devotions became common by the fifth century and processions were frequently held, with preference for days which the pagans had held sacred. These processions were called litanies, and in them pictures and other religious emblems were carried. In Rome, pope and people would go in procession each day, especially in Lent, to a different church, to celebrate the Sacred Mysteries. Thus originated the Roman "Stations", and what was called the "Litania Maior", "Major Rogation" or "Romana". It was held on 25 April, on which day the heathens had celebrated the festival of Robigalia, the principal feature of which was a procession.

The Christian litany which replaced it set out from the church of San Lorenzo in Lucina, held a station at San Valentino fuori le mura, and then at the Milvian Bridge. From thence, instead of proceeding on the Claudian Way, as the pagans had done, it turned to the left towards the Vatican Hill, stopped at a cross, of which the site is not given, and again in the atrium of St. Peter's, and finally in the basilica itself, where the station was held.

In 590, when an epidemic caused by an overflow of the Tiber was ravaging Rome, Gregory the Great commanded a litany which is called "Septiformis"; on the preceding day he exhorted the people to fervent prayer, and arranged the order to be observed in the procession, viz, that the clergy from S. Giovanni Battista, the men from San Marcello, the monks from Santi Giovanni e Paolo (Rome), the unmarried women from Santi Cosma e Damiano, the married women from Santo Stefano Rotondo, the widows from San Vitale, the poor and the children from Santa Cecilia, were all to meet at Basilica di Santa Maria Maggiore.

The "Litania Minor", also called Minor Rogations or "Gallicana", the Rogation Days before Ascension, was introduced (477) by St. Mamertus, Bishop of Vienne, on account of the earthquakes and other calamities then prevalent. It was prescribed for the whole of Frankish Gaul, in 511, by the First Council of Orléans. For Rome it was ordered by Leo III, in 799. In the Ambrosian Rite this litany was celebrated on Monday, Tuesday, and Wednesday after Ascension. In Spain we find a similar litany from Thursday to Saturday after Pentecost, another from the first to third of November, ordered by the Council of Gerunda in 517, and still another for December, commanded by the synod of Toledo in 638.

In England the Litany of Rogation Days (Gang-Days) was known in the earliest periods. In Germany it was ordered by a Synod of Mainz in 813. Because the Mass Litany became popular through its use in processions, numberless varieties were soon made, especially in the Middle Ages. Litanies appeared in honour of God the Father, of God the Son, of God the Holy Ghost, of the Precious Blood, of the Blessed Virgin, of the Immaculate Conception, of each of the saints honoured in different countries, for the souls in Purgatory, etc.

In 1601 Baronius wrote that about eighty forms were in circulation. To prevent abuse, Pope Clement VIII, by decree of the Inquisition of 6 September 1601, forbade the publication of any litany, except that of the saints as found in the liturgical books and that of Loreto. Later, litanies of the Holy Name of Jesus, the Sacred Heart, the Precious Blood, and St. Joseph were also approved for publication and public recitation.

The Anglican Church also has a Litany in the 1662 Book of Common Prayer. Thus is substantially the same as Thomas Cranmer's original English vernacular service from 1544.[1] Cranmer drew on a variety of sources, chiefly two medieval litanies from the Sarum rite, but also the German Litany of Martin Luther. He originally retained the invocation of the Saints and the Blessed Virgin Mary in very shortened form, but these were omitted in 1549,[1] and he made a notable change in the style of the service by expanding and grouping together said by the priest and provided but a single response to the whole group.[2] An anti-papal clause was omitted in 1559. The processional aspect was soon eliminated and the service said or sung kneeling in the church.[3] The term "the Lesser Litany" is sometimes used to refer to the versicles and responses, with the Lord's Prayer, that follow the Apostles' Creed at Morning Prayer (or Matins) and Evening Prayer (or Evensong).[3]

Much of the historic Litany was retained by the Lutheran Church. Luther hailed it as one of the greatest Christian prayers ever. When faced with the Turkish armies at the gates of Vienna in 1528/29, Luther exhorted pastors to call their Christian people to repentance and prayer. He recommended the use of the Litany during the Sunday mass or Vespers. In 1529, he, after modifying the traditional Litany of the Saints (mostly by removing the invocation of saints and prayers for the pope), began using the Litany at Wittenberg in Latin and German. Thomas Cranmer used Luther's revised Litany as one of his main sources in the preparation of the Litany in the Book of Common Prayer. Today, a form of the Litany continues to be used in the various Lutheran Churches around the world.[4]

In the Catholic Church, six litanies are approved for public recitation:

Many other litanies are used in private prayer. A Marian litany is one dedicated to the Blessed Virgin Mary; only one is authorised for public recitation (mentioned above). The Litany of humility is another well-known prayer. 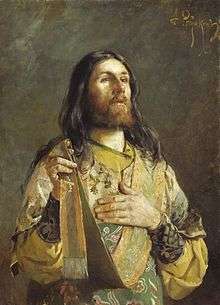 Russian Orthodox deacon giving an ektenia. He holds the edge of his orarion in his right hand, and will raise it as he finishes each petition.

In the Eastern Orthodox Church and those Eastern Catholic Churches which follow the Byzantine Rite, a litany is referred to as an ektenia. There are numerous ektenias during the Byzantine divine services: the Divine Liturgy, Vespers, Matins, the Sacred Mysteries (Sacraments), and numerous other services.

The petitions of the ektenias are usually chanted by a deacon (but if there is no deacon the priest will say the petitions), to each of which the choir (chanters) will respond. The response is usually Kyrie eleison ("Lord, have mercy"), but other responses are used at different ektenias. After the final peitition, the priest makes the ekphonesis (exclamation) which summarizes the ektenia, and always involves an invocation of the Holy Trinity.

Although used to a much lesser extent in Jewish worship, litanies do appear in Jewish liturgy. The most notable examples are during the Ten Days of Repentance. The most famous of these "supplicatory" prayers is Avinu Malkeinu, which is recited during the Rosh Hashanah and Yom Kippur liturgies. Certain Selichot prayers also take the form of a litany during the month of Elul.