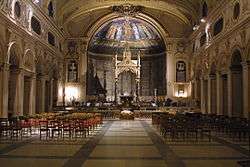 The nave, at Night. 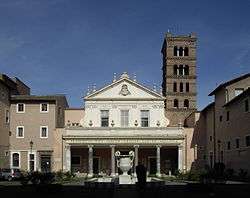 Façade of Santa Cecilia, a 1725 project by Ferdinando Fuga, with the 12th century belltower.

Santa Cecilia in Trastevere is a 5th-century church in Rome, Italy, in the Trastevere rione, devoted to the Roman martyr Saint Cecilia.

The first church on this site was founded probably in the 3rd century, by Pope Urban I; it was devoted to the young Roman woman Cecilia, martyred it is said under Marcus Aurelius Severus Alexander (A.D. 222-235). Tradition holds that the church was built over the house of the saint.[1] The baptistery associated with this church, together with the remains of a Roman house of the early Empire, was found during some excavations under the Chapel of the Relics. By the late fifth century, at the Synod of 499 of Pope Symmachus, the church is mentioned as the Titulus Ceciliae. On 22 November 545, Pope Vigilius was celebrating the Feast of the saint in the church, when the emissary of Empress Theodora, Anthemius Scribo, captured him.

Pope Paschal I rebuilt the church in 822, and moved here the relics of St Cecilia from the Catacombs of St Calixtus. More restorations followed in the 18th century.

Since 1527, a community of Benedictine nuns has lived in the monastery next to Santa Cecilia, and has had charge of the basilica.

The inscriptions found in Santa Cecilia, a valuable source illustrating the history of the church, have been collected and published by Vincenzo Forcella.[3] 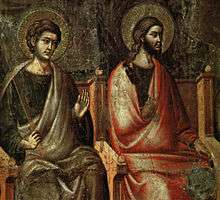 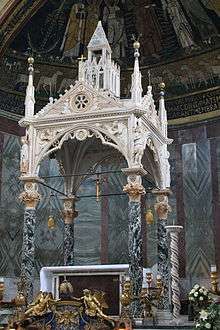 The church has a façade built in 1725 by Ferdinando Fuga, which incloses a courtyard decorated with ancient mosaics, columns and a cantharus (water vessel). Its decoration includes the coat of arms and the dedication to the titular cardinal who paid for the facade, Francesco Cardinal Acquaviva d'Aragona.

Among the artifacts remaining from the 13th century edifice are a mural painting depicting the Final judgment (1289–93) by Pietro Cavallini in the choir of the monks, and the ciborium (1293) in the presbytery by Arnolfo di Cambio. The Gothic ciborium is surrounded by four marble columns white and black, decorated with statuettes of angels, saints, prophets, and evangelists. The apse has remains of 9th century mosaics depicting the Redeemer with Saints Paul, Cecilia, Paschal I, Peter, Valerian, and Agatha.

The ceiling of Cappella dei Ponziani was decorated God the Father with evangelists (1470) by Antonio del Massaro (Antonio da Viterbo or il Pastura). The Cappella delle Reliquie was frescoed and provided with an altarpiece by Luigi Vanvitelli. The nave is frescoed with the Apotheosis of Santa Cecilia (1727) by Sebastiano Conca. The church contains two altarpieces by Guido Reni: Saints Valerian and Cecilia and a Decapitation of Saint Cecilia (1603).[4]

Martyrdom of Saint Cecilia, by Stefano Maderno, one of the most famous examples of Baroque sculpture. 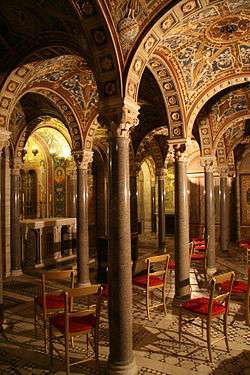 Among the most remarkable works is the graphic altar sculpture of St. Cecilia (1600) by the late-Renaissance sculptor Stefano Maderno. The pavement in front of the statue encloses a marble slab with Maderno's sworn statement that he has recorded the body as he saw it when the tomb was opened in 1599. The statue depicts the three axe strokes described in the 5th-century account of her martyrdom. It also is meant to underscore the incorruptibility of her cadaver (an attribute of some saints), which miraculously still had congealed blood after centuries. This statue could be conceived as proto-Baroque, since it depicts no idealized moment or person, but a theatric scene, a naturalistic representation of a dead or dying saint. It is striking, because it precedes by decades the similar high-Baroque sculptures of Gian Lorenzo Bernini (for example, his Beata Ludovica Albertoni) and Melchiorre Caffà (Santa Rosa de Lima).

The Crypt is also noteworthy, decorated with cosmatesque styles, containing the relics of St. Cecilia and her husband St. Valerian. In the apse of the Crypt there are remains of an altar whose inscription indicates that it was dedicated by Pope Gregory VII (1073-1085) on 3 June 1080.[5] 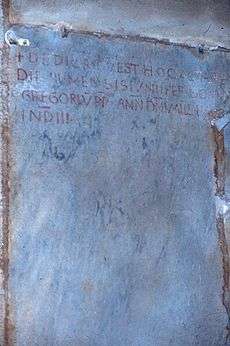 Inscription of altar of Gregory VII

Media related to Santa Cecilia in Trastevere at Wikimedia Commons