A Muslim, sometimes spelled Moslem,[1] relates to a person who follows or practises the religion of Islam,[2] a monotheistic and Abrahamic religion based on the Quran. Muslims consider the Quran to be the verbatim word of God as revealed to the Islamic prophet and messenger Muhammad. They also follow the sunnah teachings and practices of Muhammad as recorded in traditional accounts called hadith.[3] "Muslim" is an Arabic word meaning "one who submits (to God)".[4] A female Muslim is sometimes called a Muslimah.[5] There are customs holding that a man and woman or teenager and adolescent above the age of fifteen of a lunar or solar calendar who possesses the faculties of rationality, logic or sanity, but misses numerous successive Jumu'ahs without a valid excuse, no longer qualifies as a Muslim.[6][7]

Most Muslims will accept anyone who has publicly pronounced the declaration of faith (shahadah) as a Muslim.[8] The shahadah states:

There is no god but the God (Allah) and Muhammad is the last messenger of the God.[9]

The testimony authorized by God in the Quran can found in Surah 3:18 states.[10]

"There is no god except God", which in Arabic (La Ilahi Illallah), is the exact testimony which God Himself utters, also the angels and those who possess knowledge utter.[11]

Islamic beliefs commonly held by Muslims include: that God (Arabic: الله‎‎ Allāh) is eternal, transcendent and absolutely one (monotheism); that God is incomparable, self-sustaining and neither begets nor was begotten; that Islam is the complete and universal version of a primordial faith that has been revealed before through many prophets including Abraham, Moses, Ishmael and Jesus;[12] that these previous messages and revelations have been partially changed or corrupted over time[13] and that the Qur'an is the final unaltered revelation from God (The Final Testament).[14]

The religious practices of Muslims are enumerated in the Five Pillars of Islam, which, in addition to Shahadah, consist of daily prayers (salat), fasting during the Islamic month of Ramadan (sawm), almsgiving (zakat), and the pilgrimage to Mecca (hajj) at least once in a lifetime.[15][16]

The word muslim (Arabic: مسلم‎‎, IPA: [ˈmʊslɪm]; English /ˈmʌzlᵻm/, /ˈmʊzlᵻm/, /ˈmʊslᵻm/ or moslem /ˈmɒzləm/, /ˈmɒsləm/[17]) is the active participle of the same verb of which islām is a verbal noun, based on the triliteral S-L-M "to be whole, intact".[18][19] A female adherent is a muslima (Arabic: مسلمة‎‎). The plural form in Arabic is muslimūn (مسلمون) or muslimīn (مسلمين), and its feminine equivalent is muslimāt (مسلمات). The Arabic form muslimun is the stem IV participle[20] of the triliteral S-L-M. A female Muslim can variously be called in their etymologically Arabic form of Muslimah, also spelled Muslima, Muslimette, Muslimess or, simply, the standard term: Muslim.[21][22] General alternative epithets or designations given to Muslims include mosquegoer, masjidgoer, or archaic, dated and obsolete terms such as Muslimite[23] or Muslimist.[24]

The ordinary word in English is "Muslim". It is sometimes transliterated as "Moslem", which is an older spelling. The word Mosalman (Persian: مسلمان‎‎, alternatively Mussalman) is a common equivalent for Muslim used in Central Asia. Until at least the mid-1960s, many English-language writers used the term Mohammedans or Mahometans.[25] Although such terms were not necessarily intended to be pejorative, Muslims argue that the terms are offensive because they allegedly imply that Muslims worship Muhammad rather than God.[26] 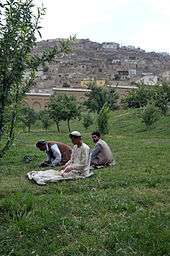 Afghan Muslims praying inside Gardens of Babur in Kabul, Afghanistan.

A Muslim is a person who has dedicated his worship exclusively to God...Islam means making one's religion and faith God's alone.[27]

Used to describe earlier prophets in the Qur'an

The Qur'an describes many prophets and messengers as well as their respective followers as Muslim: Adam, Noah, Abraham, Jacob, Moses and Jesus and his apostles are all considered to be Muslims in the Qur'an. The Qur'an states that these men were Muslims because they submitted to God, preached His message and upheld His values, which included praying, charity, fasting and pilgrimage. Thus, in Surah 3:52 of the Qur'an, Jesus' disciples tell Jesus, "We believe in God; and you be our witness that we are Muslims (wa-shahad be anna muslimūn)." In Muslim belief, before the Qur'an, God had given the Torah to Moses, the Psalms to David and the Gospel to Jesus, who are all considered important Muslim prophets.

About 13% of Muslims live in Indonesia, the largest Muslim country,[28] 25% in South Asia,[28] 20% in the Middle East and North Africa,[28][29] 2% in Central Asia, 4% in the remaining South East Asian countries, and 15% in Sub-saharan Africa.[28] Sizable communities are also found in China and Russia, and parts of the Caribbean. The country with the highest proportion of self-described Muslims as a proportion of its total population is Morocco.[30] Converts and immigrant communities are found in almost every part of the world.