A magic carpet, also called a flying carpet, is a legendary carpet that can be used to transport humans who are on it instantaneously or quickly to their destination.

One of the stories in the One Thousand and One Nights relates how Prince Husain, the eldest son of Sultan of the Indies, travels to Bisnagar (Vijayanagara) in India and buys a magic carpet[1] This carpet is described as follows: "Whoever sitteth on this carpet and willeth in thought to be taken up and set down upon other site will, in the twinkling of an eye, be borne thither, be that place nearhand or distant many a day's journey and difficult to reach."[2] The literary traditions of several other cultures also feature magical carpets, in most cases literally flying rather than instantly transporting their passengers from place to place. 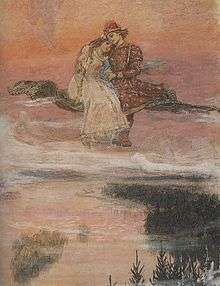 Another of Vasnetsov's renderings of the same subject

Solomon's carpet[3] was reportedly made of green silk with a golden weft, sixty miles long and sixty miles wide: "when Solomon sat upon the carpet he was caught up by the wind, and sailed through the air so quickly that he breakfasted at Damascus and supped in Media."[4] The wind followed Solomon's commands, and ensured the carpet would go to the proper destination; when Solomon was proud, for his greatness and many accomplishments, the carpet gave a shake and 40,000 fell to their deaths.[5] The carpet was shielded from the sun by a canopy of birds. In Shaikh Muhammad ibn Yahya al-Tadifi al-Hanbali's book of wonders, Qala'id-al-Jawahir ("Necklaces of Gems"), Shaikh Abdul-Qadir Gilani walks on the water of the River Tigris, then an enormous prayer rug (sajjada) appears in the sky above, "as if it were the flying carpet of Solomon [bisat Sulaiman]".[6]

In Russian folk tales, Baba Yaga can supply Ivan the Fool with a flying carpet or some other magical gifts (e.g. a ball that rolls in front of the hero showing him the way, or a towel that can turn into a bridge). Such gifts help the hero to find his way "beyond thrice-nine lands, in the thrice-ten kingdom". Russian painter Viktor Vasnetsov illustrated the tales featuring a flying carpet on two occasions (illustrations above and to the left). 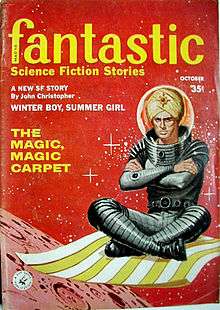 A. Bertram Chandler's novelette "The Magic, Magic Carpet" was the cover story for the October 1959 issue of Fantastic

Magic carpets have also been featured in modern literature, movies, and video games, and not always in a classic context.