This article is about Prasad of Jagannath temple. For other uses, see Prasad. 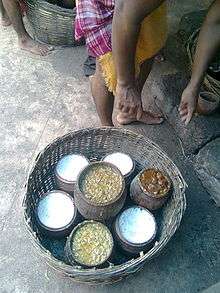 Mahaprasad (Odia: ମହାପ୍ରସାଦ) is the term applied to the 56 food items offered to Lord Jagannath in the holy Temple of Puri, located in Odisha, India.The "Prasad" offered to him and later to Maa Bimala in the Grand Temple(SriMandir)is known as 'Mahaprasad'.

'Mahaprasad' is of two types. One is Sankudi mahaprasad and the other is Sukhila mahaprasad. Both the types are available for sale in Ananda Bazaar of the Grand Temple.

Besides Sankudi and Sukhila mahaprasad another type of dry mahaprasad is Nirmalya. This is also known as Kaibalya. In spiritual recognition Nirmalya is equally important as Mahaprasad. There is a belief among Hindus that if Nirmalya is given to a person on his death bed, he is certain to find a place for himself in the heaven after his death following atonement of all his sins. Nirmalya is commonly understood as dry-rice i.e. rice dried up in hot sun in Kaibalya Baikuntha. As laid down in the Skanda Purana things like flowers, sandal paste, garlands, etc. which are treated with reverence on the Lord including the other divine deities seated on Ratnasinmhasan (throne) in the temple are also known as Nirmalya after they are taken out from the deities. It is thus clear to mention that any of the divine accompaniments or components that is taken out of the Lord and his divine associates is known as Nirmalya.

Four hallowed shrines located at cardinal points of the Indian sub-continent i.e. Puri, Rameswar, Dwarika and Badrinath are believed to have been liked by Lord Vishnu intimately. It is said and believed that He takes His bath at Rameswaram, meditates at Badrinath, dines at Puri and retires at Dwarika. Hence, the temple food "Mahaprasad" (not simply prasad) at Puri is held to be of supreme importance.

According to " Skanda Purana" Lord Jagannath redeems the devotees by permitting them to partake his Mahaprasad, to have His darshan and to worship him by observing rituals and by offering of gifts. Mahaprasad is treated here as 'Anna Brahma'. The temple kitchen has got the capacity to cook for a lakh of devotees on a day. Mahaprasad is cooked only in earthen pots and medium of food is fire wood only. The steam-cooked food is offered to Lord Jagannath first and then to Goddess Vimala after which it becomes Mahaprasad. This Mahaprasad is freely partaken by people of all castes and creeds without any discrimination. The items offered include cooked rice, dal, vegetable curry, sweet-dishes, cakes etc. Dry confectioneries are prepared of sugar, gur, wheat flour, ghee, milk and cheese ( Chenna) etc.

When the steam cooked food is carried to Lord in slings of earthen pots no flavour comes up from the food but when the same is carried back to the sale point after being offered to the Lord a delicious smell spells along in the breeze to the pleasant surprise of the devotees. Now the food is blessed.

Mahaprasad are sold in Anand Bazar or the Pleasure Mart of the temple which is situated on the north east corner of the outer enclosure of the temple. It is the biggest open-air hotel in the world where every day thousands of devotees purchase and eat together forgetting their caste, creed and status.

Most of the residents in and around Puri depend upon this Mahaprasad to entertain their guests during social functions such as threading and weddings. In all auspicious occasions in Odia Hindu families Mahaprasad is taken first.

The tourists prefer to carry a particular type of dry Mahaprasad known as" Khaja" (made of maida, sugar and ghee) which stays fresh for days together.

Mahaprasad is ceased to be offered during the 21 days preceding the Ratha Yatra, as the lord is said to be having fever in that period.

Mahaprasad served on a plantain leaf

There are six particular times a day, starting from early morning, when different kinds of Pitha, vegetables, rice and dal are offered to Jagannath and his sibling deities. Locally the offerings are called Dhupa when offered through Sodasa (16) Upchars and Bhoga when offered through pancha upacharas.[1]

The most popular is the midday Naivedhya, which contains the maximum number of food items. The items are not cooked by any human beings, but rather the ingredients are put in earthen vessels and kept on a wooden fire. After time has passed, the items are taken away from fire and taken by supakaras to the Sanctum sanctorum or Garbhagriha for offering. The naivedhya is thereafter offered to the sibling deities that is again offered to Vimala, a form of Shakti. Then the prasad becomes Mahaprasad and people partake the mahaprasad.

When the Sun stays in the zodiac Dhanu, during that time an additional naivedhya is given before sunrise which is called Pahili Bhoga.[2]

Daily offerings to the Lord include:

Except Gopal Ballav Bhog and Bhog Mandap all other 4 bhogs are offered near the Ratnabedi inside the frame of Phokaria which is being drawn by the Puja pandas using Muruj. The items that form the core of offerings to Lord Jagannath’s Mahaprasad are:

Gopal Vallabh Bhog (Breakfast at 8.30 am)

The offering is the first one of the daily Prasad to Lord Jagannath. The Bhogs are offered at the Anabsar Pindi.[3] Breakfast is a seven item treat - Khua, Lahuni, grated sweet coconut, coconut water, and rice puffs sweetened with sugar known as Khai and curd, and ripe bananas.

Members of Sevayats conduct this Puja in 5 Upchars. The sevayats who conduct this ritual are Puja Panda, Sudha Suar, Ballav Jogania, Suar Badu, Gara Badu, Palia Maha Suar. In the month of Dhanu Sankranti, Ballav Bhog is offered along with Pahali Bhog. Similarly on the DolaPurnima and Snana Purnima days, the Ballav Bhog and Sakal Dhup are taken up at one time. During Anabasar the Bhogs are offered near Jay-Vijay door as Sarpamanohi, but not on ballav pindi.

This is the first cooked meal Bhog. This bhoga is also called 'Kotha bhoga' or 'Raja bhoga' [4] The Sevaks offer this Bhoga with 16 Upchars on sitting on Ratnavedi. The following items are offered as Bhog for the purpose.

Bhoga Mandapa Bhoga (Supplementary to breakfast at 11.00 am)

As per the demand of the devotees, the Bhogs are sold for a fee.[5]

Like the Sakal Dhup, this is also performed in 16 Upchars.[6] The Sevayats engaged for the Sakala Dhupa are only allowed for Madhyana Dhupa and Sandhya Dhupa. Generally different types of sweet cakes are offered during this Puja. The Bhogs used for this purpose is as follows:

After the evening Arati, Sandhya Dhup Bhog is offered. This Arati is also called as Jaya Mangal Arati. Items are also prepared on request of devotees. The following items are presented for this Bhog.

This is the last Bhog of the deities.[7] As per the record of rites of Srimandir, the time has been fixed for 11.15 pm. Before Dhup, the Palia Puspalaks dress up the deities with silk dresses (Pata), flower garlands and sing Gita Govinda. The Bhog is performed with 5 Upchars by three members of Puja Pandas by sitting at the side of Ratnabedi. The following items are offered.