Ratha Yatra (Odia: ରଥଯାତ୍ରା or Ratha Jatra or Chariot Festival) is a Hindu festival associated with Lord Jagannath (Odia:ଜଗନ୍ନାଥ )held at Puri in the state of Odisha, India. It is the oldest Ratha Yatra taking place in India and the World, dating back to 10 - 11 century and its descriptions can be found in Brahma Purana(ବ୍ରହ୍ମ ପୁରାଣ), Padma Purana(ପଦ୍ମ ପୁରାଣ ), and Skanda Purana(ସ୍କନ୍ଦ ପୁରାଣ ) and Kapila Samhita(କପିଳା ସଂହିତା ).[1]

As part of Ratha Yatra, the deities of Jagannath(ଜଗନ୍ନାଥ ),his elder brother Balabhadra(ବଳଭଦ୍ର ) and younger sister Subhadra(ସୁଭଦ୍ରା ) are taken out in a procession to Gundicha Temple and remain there for nine days.They are also accompanied by Sudarshana chakra(ସୁଦର୍ଶନ ଚକ୍ର ). Then the deities or Ratha Yatra return to the Main temple. The return journey of Puri Jagannath Ratha Jatra is known as Bahuda Jatra(ବାହୁଡା ଯାତ୍ରା ).

Three richly decorated chariots, resembling temple structures, are pulled through the streets of Puri called Badadanda(ବଡଦାଣ୍ଡ). This commemorates the annual journey of Lord Jagannath, Lord Balabhadra, and their sister Subhadra to their aunt's temple, the Gundicha Temple which is situated at a distance of 2 km from their temple. This is the only day when devotees who are not allowed in the temple premises, such as non-Hindus and foreigners, can get their glimpse of the deities. During the festival, devotees from all over the world go to Puri with an earnest desire to help pulling the Lords' chariots with the help of other priests pulling the chariots with ropes. They consider this auspicious deed and risk their lives in the huge crowd. The huge processions accompanying the chariots play devotional songs with drums, tambourines, trumpets etc. Children line the streets through which the chariot will pass and add to the mass chorus. The Ratha carts themselves are some approximately 45 feet (14 m) high and are pulled by the thousands of pilgrims who turn up for the event; the chariots are built anew each year only from a particular type of tree. Millions of devotees congregate at Puri for this annual event from all over the country and abroad. It is also broadcast live on many Indian, foreign television channels as well as many of the websites telecast jagannath ratha yatra live.[2]

The "Bada Danda" or the Grand Avenue

Ratha Jatra, the Festival of Chariot: Chariots of Shri Jagannath is celebrated every year at Puri, the temple town in Odisha, on the second (dwitiya) day of shukla pakshya (waxing cycle of moon) of Ashadh Maas (3rd month in Lunar Calendar). The presiding deities of the Jagannath Temple, Puri's main temple, Lord Jagannath, Lord Balabhadra and Goddess Subhadra, with the celestial wheel (Sudarshana Chakra/ସୁଦର୍ଶନ ଚକ୍ର ) are removed from the temple in a ceremonial procession to their chariots. The huge, colourfully decorated chariots are drawn by multitude of devotees on the bada danda, the grand avenue to the Gundicha Temple (Gundicha – King Indradyumna's Queen), two miles away to the North. On the way the chariot of Lord Jagannatha, Nandighosa (ନନ୍ଦିଘୋଷ) waits near the crematorium of Bhakta Salabega (ଭକ୍ତ ସାଲବେଗ) a muslim devout to pay him tribute.

On their way back from the Gundicha Temple, the three deities stop for a while near the Mausi Maa Temple (Aunt's abode) and have an offering of the Poda Pitha, which is a special type of pancake supposed to be the Lord's favourite. After a stay for seven days, the deities return to their abode. 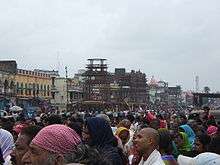 Rath/chariots under construction for the Rath Yatra in Puri 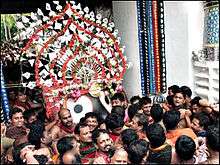 Jagannath being brought out of the Puri temple to the Rath

Jagannath on his chariot

The three chariots of Balabhadra, Subhadra and Jagannatha are newly constructed every year with wood of specified trees like phassi, dhausa, etc. They are customarily brought from the ex-princely state of Dasapalla by a specialist team of carpenters who have hereditary rights and privileges for the same. The logs are traditionally set afloat as rafts in the river Mahanadi. These are collected near Puri and then transported by road.

The three chariots are decorated as per the unique scheme prescribed and followed for centuries stand on the Bada Danda, the Grand Avenue. Covered with bright canopies made of stripes of red cloth and combined with those of black, yellow and blue colours, the huge chariots are lined across the wide avenue in front of the majestic temple close to its eastern entrance, which is also known as the Sinhadwara or the Lion's Gate.

Lord Jagannatha's chariot is called Nandighosa. It is forty-five feet high and forty-five feet square at the wheel level. It has sixteen wheels, each of seven-foot diameter, and is decked with a cover made of red and yellow cloth. Lord Jagannatha is identified with Krushna, who is also known as Pitambara, the one attired in golden yellow robes and hence the distinguishing yellow stripes on the canopy of this chariot. 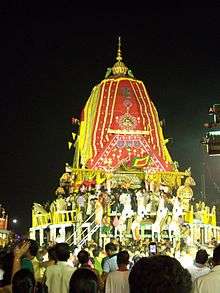 The chariot of Lord Balarama, called the Taladhwaja, is the one with the Palm Tree on its flag. It has fourteen wheels, each of seven-foot diameter and is covered with red and blue cloth. Its height is forty-four feet. 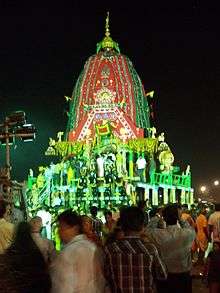 The chariot of Subhadra, known as Dwarpadalana, literally "trampler of pride," is forty-three feet high with twelve wheels, each of seven-foot diameter. This chariot is decked with a covering of red and black cloth – black being traditionally associated with Shakti and the Mother Goddess. 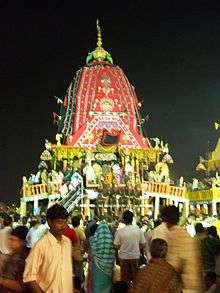 Descriptions of the Chariots

The chariot of Lord Jagannath is named as Nandighosha or Garudadhwaja or Kapiladhwaja. The Lord is accompanied by Madanmohan.

The Chariot of Balabhadra named as Taladhwaja or Langaladhwaja. The Lord is accompanied by Ramakrishna. 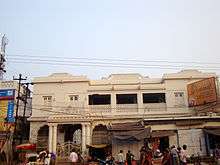 The Kings palace in Puri

The construction of the chariots starts on Akshaya Trutiya, the third day of the bright fortnight of Vaisakha, with ritual fire worship. This takes place in front of the palace of the King of Puri and opposite the main office of the Puri temple. On this day, the new agricultural season starts and farmers start ploughing their fields. This day also marks the beginning of the summer festival of the deities, also known as the sandalwood festival or Chandan Yatra, which lasts for three weeks. In this festival, the representative images of the presiding deities are taken out in colourful processions and given a ceremonial boat ride in the Narendra pokhari/tank(ନରେନ୍ଦ୍ର ପୋଖରୀ) every day. In an interesting demonstration of the assimilative character of the Jagannatha cult, Madanmohana(ମଦନମୋହନ) and Rama Krushna, representing Jagannatha & Balarama partake in the festival with the representatives' images of the presiding deities of five main Shiva temples of Puri. These are curiously known as Pancha Pandava(ପାଞ୍ଚ ପାଣ୍ଡବ), the five brothers of the Mahabharata story. Later the deities have a ritual bath in a small temple in the middle of the tank, in stone tubs filled with water, sandalwood paste, scents and flowers. The chariots under construction

This sandalwood festival culminates in the Snana Yatra(ସ୍ନାନ ଯାତ୍ରା ), the Bathing Festival on the full moon day of the month of Jestha. On this day, the presiding deities descend from their seats on an elevated platform in the sanctum sanctorum, the bejewelled throne. They are bathed in 108 pots of water brought from the suna kua, the golden well and assume the elephant form on the special bathing platform, close to the Eastern boundary wall of the temple. From that day the deities remain in symbolic and ritual convalescence for about two weeks. They are barred from view of the ordinary devotees. Only three special patta chitras, traditional Oriya paintings of natural colours on cloth stiffened with starch, known as Anasara Pattis, are strung on a bamboo screen hiding the deities from public view, can be seen by the public. During this period, the deities are given only roots, leaves, berries and fruits to cure them from their indisposition. This ritual is a reminder of the strong tribal elements in the genesis and evolution of the Jagannatha cult. The progeny of Lalita, daughter of the original tribal worshipper Biswabasu, chieftain of hunters, and the Brahmin priest Vidyapati, are known as daitapatis or daitas. They have almost exclusive privilege of serving the Lord during the convalescence and through the entire period of Ratha Jatra or the Festival of Chariots.

The Suna Besha of Jagannath

After the chariots of the deities return to the main temple from the Gundicha temple, the deities are attired in gold ornaments and worshipped on the chariots. This celebration is known as Suna Besha. Tradition maintains that this event was first started by King Kapilendra Deb in 1460, when after returning victorious from war he donated gold to Jagannath.[3] The deities are adorned with gold jewelleries weighing nearly 208 kg. In 2014 nearly nine hundred thousand devotees witnessed this event held on 9 July[4] 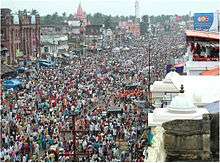 Devotees visiting the Ratha Yatra of 2007

The Ratha yatra in Puri of 2014 started on 29 June amid great fanfare and religious fervor with tight security arranged by the authorities.[5] The Indian Prime minister Mr Narendra Modi greeting the people on the occasion of the Ratha Yatra tweeted "My warm greetings to the people on the occasion of the rath yatras that would be held across India today. We bow to Lord Jagannath on this auspicious day. Today once again He sets out on His chariot, giving blessings to the people,".[6] More than a million devotees are expected to throng Puri on the occasion for the festival that is watched by millions on television.[7] The Bahuda yatra or the return journey of Jagannath from Gundicha temple occurred on 7 July and was attended by more than 400,000 devotees[8]

The Ratha Yatra and Pahandi of 2015

The Ratha yatra in Puri of 2015 started on 18 July amid great fanfare and religious fervor with tight security arranged by the authorities.[9]

Jagannath temple employs different kinds of sevakas who offer their services on the Ratha.