For other countries that use this rank, see major.

Army, Marine Corps, and Air Force insignia of the rank of major. Style and method of wear may vary between the services.

U.S. Army insignia of the rank of Major. Style and method of wear may vary between the services.

U.S. Marine Corps insignia of the rank of Major. Style and method of wear may vary between the services.

U.S. Air Force insignia of the rank of Major. Style and method of wear may vary between the services.

The pay grade for the rank of major is O-4. The insignia for the rank consists of a golden oak leaf, with slight stylized differences between the Army/Air Force version and the Marine Corps version. Promotion to major is governed by Department of Defense policies derived from the Defense Officer Personnel Management Act of 1980. 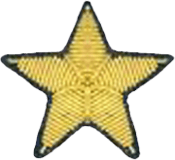 During the American Civil War the Union Army continued to use the existing titles of rank and rank insignia established for the US Army. After the Southern states seceded and became the Confederate States of America, the Confederate Army retained the same titles of rank as its Union counterpart, but developed a new system of rank identification and insignia for its officers.

While Union officers continued to wear their rank insignia on their shoulder straps, Confederate officers wore their rank insignia on the collar (one, two, or three horizontal gold bars for lieutenants and captains; one, two, or three gold stars for field grade officers; and three gold stars surrounded by a wreath for all general officers), as well as rows of gold lace forming an Austrian knot pattern on each sleeve. The number of rows of gold lace increased with the rank of the officer.

A major in the Air Force typically has duties as a senior staff officer at the squadron and wing level. In flying squadrons majors are generally flight commanders or assistant directors of operations. In the mission support and maintenance groups majors may occasionally be squadron commanders. In the medical corps, a major may be the head of a clinic or flight.

Many police agencies in the United States use the rank of major for officers in senior administrative and supervisory positions. The position is most often found in larger agencies, where the number of sworn personnel requires an expanded and complex rank structure. The term "major" is not always used in these scenarios, and some police departments prefer to use titles such as "Deputy Chief," "Commander," or similar, retaining only the rank insignia. However, there are several agencies, particularly state police, which prefer to use both the insignia and title. The rank may also be used in conjunction with, rather than instead of, a descriptive title, such as in the example, "Major John Smith, Patrol Commander".