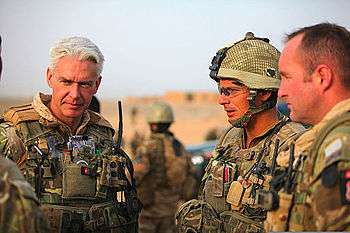 An officer is a member of an armed force or uniformed service who holds a position of authority. Used without further detail, the term "officer" almost always refers to commissioned officers, the most senior portion of a force who derive authority from a commission from a state. In its broadest sense, the term "officer" also includes lower level leaders who are referred to as non-commissioned officers. 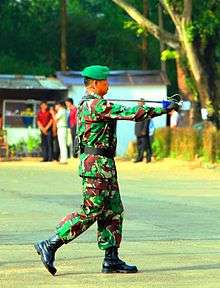 An Indonesian army officer serving as a ceremonial field commander

Historically, however, armed forces have generally had much lower proportions of officers. During the First World War, fewer than 5% of British soldiers were officers (partly because World War One junior officers suffered very high casualty rates). In the early twentieth century, the Spanish army had the highest proportion of officers of any European army, at 12.5%.

Having officers is one requirement for combatant status under the laws of war, though these officers need not have obtained an official commission or warrant. In such case, those persons holding offices of responsibility within the organization are deemed to be the officers, and the presence of these officers connotes a level of organization sufficient to designate a group as being combatant.

Terminological details in the U.S.

Commissioned officers are typically the only persons, in an armed forces environment, able to act as the commanding officer (according to the most technical definition of the word) of a military unit.[5] A superior officer is an officer with a higher rank than another officer, who is a subordinate officer relative to the superior.

Non-commissioned officers (NCOs) in positions of authority can be said to have control or charge rather than command per se (although the word "command" is often used unofficially to describe any use of authority).

Commissioned officers generally receive training as leadership and management generalists, in addition to training relating to their specific military occupational specialty or function in the military. Many advanced militaries require university degrees as a prerequisite for commissioning, even from the enlisted ranks. Others, including the Australian Defence Force, the British Armed Forces (BAF), Nepal Army, the Pakistani Armed Forces (PAF), the Swiss Armed Forces, the Singapore Armed Forces, the Israel Defense Forces (IDF), the Swedish Armed Forces, and the New Zealand Defence Force, are different in not requiring a university degree for commissioning - although a significant number of officers in these countries are graduates. In the Israel Defense Forces, a university degree is a requirement for an officer to advance to the rank of lieutenant colonel. The IDF often sponsors the studies for its majors, while aircrew and naval officers obtain academic degrees as a part of their training programmes. 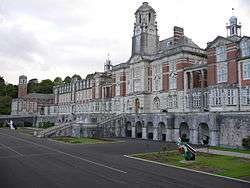 In the United Kingdom, there are three routes of entry for British Armed Forces officers. The first, and primary route are those who receive their commission directly into the officer grades following completion at their relevant military academy. In the second method, an individual may gain their commission after first enlisting and serving in the Junior Ranks, and typically reaching one of the Senior Non-Commissioned Officer (SNCO) ranks (which start at Sergeant (Sgt), and above), as what are known as 'Direct Entry' or DE officers (and are typically and informally known as an 'ex-ranker'). The third route is similar to the second, in that they convert from an enlisted to a commission; but these are only taken from the highest ranks of SNCOs, and are known as 'Late Entry' or LE officers. LE officers, whilst holding the same Queen's Commission, generally work in different roles from the DE officers. In the infantry, a number of Warrant Officer Class 1s (WO1) are commissioned as LE officers.

In the British Army, commissioning for DE officers occurs after a 44-week course at the Royal Military Academy Sandhurst (RMA Sandhurst) for regular officers or the Army Reserve Commissioning Course for Army Reserve officers. For Royal Navy (RN) and Royal Air Force (RAF) officer candidates, a 30-week period at Britannia Royal Naval College or a 30-week period at RAF College Cranwell, respectively. Royal Marines officers receive their training in the Command Wing of the Commando Training Centre Royal Marines during a grueling 15-month course. The courses consist of not only tactical and combat training, but also leadership, management, etiquette, and international affairs training.

Until the Cardwell Reforms of 1871, commissions in the British Army were purchased by officers. The Royal Navy, however, operated on a more meritocratic, or at least socially mobile, basis.

Newly commissioned U.S. Navy and Marine Corps officers celebrate their new positions by throwing their midshipmen covers into the air as part of the U.S. Naval Academy class of 2005 graduation and commissioning ceremony.

Most officers in the Armed Forces of the United States are typically commissioned through one of three major commissioning programs:

A smaller number of officers may be commissioned via other programs, such as the Marine Corps Platoon Leaders Class (PLC) during summers while attending college, or the Navy's since discontinued Aviation Officer Candidate School (AOCS) program, which also included the embedded Aviation Reserve Officer Candidate (AVROC) and Naval Aviation Cadet (NAVCAD) programs. Others may attend pre-commissioning or post-commissioning officer indoctrination programs for officers in the medical/dental specialities, lawyers slated as Judge Advocate General's Corps (JAG) officers, and military chaplains.

Graduates from the United States service academies attend their institutions in an active duty status for no less than four years, and are commissioned immediately upon graduation; they comprise approximately 20% of the U.S. armed forces officer corps.

Other officers may be commissioned through the Reserve Officers' Training Corps (ROTC), which is the largest source of officers for the U.S. Army and the U.S. Air Force. ROTC is composed of small training programs at several hundred American colleges and universities.[6] There is no Marine Corps ROTC program per se, but there exists a Marine Corps Option for selected midshipmen in the Naval ROTC programs like at The Citadel.[7] The Coast Guard has no ROTC program, but does have a Direct Commission Selected School Program for military colleges such as The Citadel and VMI.[8]

An officer may also be commissioned at a federal or, for a limited number of Army National Guard (ANG) officers, at a state-based Officer Candidate School. These schools train and commission college graduates and enlisted personnel toward being promoted to the commissioned officer ranks.

In the United States Armed Forces, officers without a university degree can, under certain circumstances, be commissioned. These are typically the officers in the Limited Duty Officer (LDO) and Chief Warrant Officer (CWO) programs of the Navy, Marine Corps and Coast Guard. Officers in this category comprise less than 2% of all officers. The Air Force, in contrast, now requires all commissioned officers, regardless of background, to possess a minimum of a bachelor's degree prior to commissioning.

Direct commission is another route to becoming a commissioned officer. Credentialed civilian professionals such as scientists, pharmacists, physicians, nurses, clergy, and attorneys are directly commissioned upon entry into the military or another federal uniformed service. However, these direct commission officers do not normally have command authority outside of their specific branches (e.g., U.S. Army Medical Corps; U.S. Navy and U.S. Air Force Judge Advocate General's Corps).

Such commissioning of civilians was widely used in World War II to bring industrial management expertise (for materiel production) and medical and surgical skills into the U.S. armed forces. Lieutenant general William S. Knudsen, with the highest-ranking such commission, is possibly the most famous example. 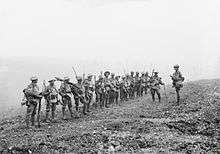 In countries whose ranking systems are based upon the models of the British Armed Forces (BAF), officers from the rank of Second Lieutenant (army), Sub-Lieutenant (navy) or Pilot Officer (air force) to the rank of General, Admiral or Air Chief Marshal respectively, are holders of a commission granted to them by the appropriate awarding authority. In United Kingdom (UK) and other Commonwealth realms, the awarding authority is the monarch (or a Governor General representing the monarch) as head of state. The head of state often is granted the power to award commissions, or has commissions awarded in his or her name.

In Commonwealth nations, commissioned officers are given commissioning scrolls (also known as commissioning scripts) signed by the Sovereign or the Governor General acting on the monarch's behalf. Upon receipt, this is an official legal document that binds the mentioned officer to the commitment stated on the scroll.

Non-commissioned members rise from the lowest ranks in most nations. Education standards for non-commissioned members are typically lower than for officers (with the exception of specialised military and highly-technical trades; such as aircraft, weapons or electronics engineers). Enlisted members only receive leadership training after they are promoted to positions of responsibility, or as a prerequisite for such. In the past (and in some countries today but to a lesser extent), non-commissioned members were almost exclusively conscripts, whereas officers were volunteers.

A non-commissioned officer (NCO) is an enlisted member of the armed forces holding a position of some degree of authority who has (usually) obtained it by advancement from within the non-commissioned ranks. Officers who are non-commissioned usually receive management and leadership training, but their function is to serve as supervisors within their area of trade specialty. Senior NCOs serve as advisers and leaders from the duty section level to the highest levels of the armed forces establishment, while lower NCO grades are not yet considered management specialists. The duties of an NCO can vary greatly in scope, so that an NCO in one country may hold almost no authority, while others such as the United States and the United Kingdom consider their NCOs to be "the backbone of the military" due to carrying out the orders of those officers appointed over them.[9]

In most maritime forces (navies and coast guards), the NCO ranks are called petty officers while enlisted ranks prior to attaining NCO/petty officer status typically known as seaman, or some derivation thereof. In most traditional infantry, marine and air forces, the NCO ranks are known as sergeants and corporals, with non-NCO enlisted ranks referred to as privates and airmen.

However, some countries use the term commission to describe the promotion of enlisted soldiers. Especially in countries with mandatory service in the armed forces. These countries refer to their NCOs as professional soldiers, rather than as officers.

Officers in nearly every country of the world are segregated from the enlisted soldiers in many facets of military life. Facilities accommodating needs such as messing (i.e., mess hall or mess deck versus officers mess or wardroom), billeting/berthing, domiciles, and general recreation facilities (officer clubs versus NCO Clubs and CPO Clubs versus enlisted clubs) are separated between officers and enlisted personnel. This class system, historically correlated to socioeconomic status, is focused on discouraging fraternization and encouraging professional and ethical relations between officers and enlisted military personnel.[10]