Not to be confused with college majors or minors.

In Western music, the adjectives major and minor can describe a musical composition, movement, section, scale, key, chord, or interval.

Major and minor are frequently referred to in the titles of classical compositions, especially in reference to the key of a piece.

Relative tonic chords on C and A.

Minor chord
The difference between the major and minor chord may be seen if they are drawn in chromatic circle.

With regard to intervals, the words major and minor just mean large and small, so a major third is a wider interval, and a minor third a relatively narrow one. The intervals of the second, third, sixth, and seventh (and compound intervals based on them) may be major or minor.

Play  scales on C: common notes connected by a vertical line, the root and the fifth of the primary triads

The hallmark that distinguishes major keys from minor is whether the third scale degree is major or minor. "The crucial difference is that in the minor scale there is only a half step between the second and third tones as compared to the major scales where the difference between third and fourth note and between the seventh and the eighth note is half."[1] This alteration in the third degree "greatly changes" the mood of the music, and "music based on minor scales tends to" be considered to "sound serious or melancholic".[1]

The minor scale can be described in two different ways. One way is to consider it as the sixth mode of a major scale, while the other is to call it a variation of the major scale, with the third scale degrees always lowered (or altered) and the sixth and seventh degrees often lowered.

Minor keys are sometimes said to have a more interesting, possibly sadder sound than plain major scales.[2] The minor mode, with its variable sixth and seventh degrees, offers nine notes, in C: C-D-E♭-F-G-A♭-A♮-B♭-B♮, over the major mode's seven, in C: C-D-E-F-G-A-B.

Contrastingly, changes of mode, which would involve the alteration of the third, and mode mixture, are often analyzed as minor or trivial changes unless structurally supported because the root and overall key and tonality remain unchanged. This is in contrast with, for instance, transposition. Transposition is done by moving all intervals up or down a certain constant interval, and does change key, but does not change mode, which requires the alteration of intervals. The use of triads only available in the minor mode, such as the use of A♭-major in C major, is relatively decorative chromaticism, considered to add color and weaken sense of key without entirely destroying or losing it.

In western music theory, keys, chords, and scales are often described as having major or minor tonality, sometimes related to masculine and feminine genders, especially in languages with insistent syntactical gender assignments. By analogy, the major scales are given stereotypically masculine qualities (clear, open, extroverted), while the minor scales are given stereotypically feminine qualities (dark, soft, introverted). German uses the word Tongeschlecht ("Tone gender") for tonality, and the words Dur (from Latin durus, 'hard') for major and moll (from Latin mollis, 'soft') for minor.

There are three variations of the minor scale: natural, harmonic and melodic.

Underlying perceived musical tuning of intervals is the frequency relationship expressed as a fraction. Simple fractions can sound more harmonious than complex fractions; for instance an octave is a simple 2:1 ratio and a fifth, also concordant is the relatively simple 3:2 ratio. The table below gives approximations of a scale to ratios that are rounded towards being as simple as possible.

In just intonation, a minor chord is often (but not exclusively) tuned in the frequency ratio 10:12:15 (

Play , 297.5 cents, the nineteenth harmonic) with about two cents error.[4] Ellis proposes that the conflict between mathematicians and physicists on one hand and practicing musicians on the other regarding the supposed inferiority of the minor chord and scale to the major may be explained due to physicists' comparison of just minor and major triads, in which case minor comes out the loser, versus the musicians' comparison of the equal tempered triads, in which case minor comes out the winner since the ET major third is about 14 cents sharp from the just major third (5:4, 386.3 cents), but just about four cents narrower than the 19-limit major third (24:19, 404.4 cents); while the ET minor third closely approximates the 19:16 minor third which many find pleasing.[5]

Minor as upside down major 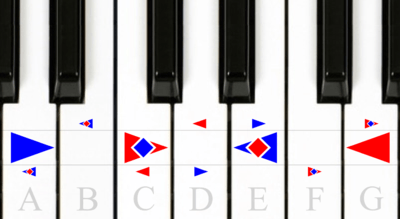 Major and minor triads: The minor mode is considered the inverse of the major mode. (file)

In the German theory by or derived from Hugo Riemann, the minor mode is considered the inverse of the major mode, an upside down major scale based on (theoretical) undertones rather than (actual) overtones (harmonics) (See also: Utonality). The "root" of the minor triad is thus considered the top of the fifth, which, in the United States, is called "the" fifth. So in C minor, the tonic root is actually G, and the leading tone is A♭ (a halfstep), rather than, in major, the root being C and the leading tone B (a halfstep). Also, since all chords are analyzed as having a tonic, subdominant, or dominant function, with, for instance, in C, A-minor being considered the tonic parallel (US relative), Tp, the use of minor mode root chord progressions in major such as A♭-major—B♭-major—C-major is analyzed as sP—dP—T, the minor subdominant parallel, the minor dominant parallel, and the major tonic. (Gjerdingen, 1990)