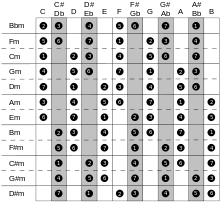 In music theory, minor scale may refer to:

The A natural minor scale.

This pattern of whole and half steps characterizes the natural minor scales.

The natural minor scale follows the sequence of steps:

In semitones, this is

If the white keys on the piano are played beginning on the sixth step of the C-major scale, which is A, to the A an octave above, then a natural minor scale is produced. In this case the minor scale is called A-minor, and this minor scale has no accidentals (sharps or flats). A-minor is called the relative minor of C. Every major key has a relative minor, which starts on the sixth scale degree or step. For instance, the sixth degree of F major is D, and thus its relative minor is D minor. The relative natural minor of a major key always shares the same notes: for example, F major consists of F, G, A, B♭, C, D, and E, while D natural minor consists of D, E, F, G, A, B♭, and C.

The natural minor scale can also be represented by the notation:

Each degree of the scale, starting with the tonic (the first, lowest note of the scale), is represented by a number. Their difference from the major scale is shown. Thus a number without a sharp or flat represents a major (or perfect) interval. A number with a flat represents a minor interval, and a number with a sharp (though there are none in this example) represents an augmented interval. In this example, the numbers mean: 1=unison, 2=major second, ♭3=minor third, 4=perfect fourth, 5=perfect fifth, ♭6=minor sixth, ♭7=minor seventh, 8=octave. So, the natural minor scale consists of: 1, the tonic, followed by 2, a note a major second above the tonic, ♭3, a note a minor third above the tonic, and so forth, up to 8, a note an octave above the tonic.

In rock and popular music examples of songs in Minor Keys include The Moody Blues' "Nights in White Satin", Blondie's "Call Me", and Michael Jackson's "Billie Jean".[2]

The A harmonic minor scale. Its seventh note is raised by a semitone.

In semitones, this is

This can also be notated as:

The scale is so named because it is a common foundation for harmonies (chords) used in a minor key. For example, in the key of B-minor, the V chord (the triad built on the note F♯) is normally a minor triad, which includes the seventh degree of the B-minor scale: A♮, as opposed to the raised seventh A♯, which would make a major triad in Harmonic Minor. 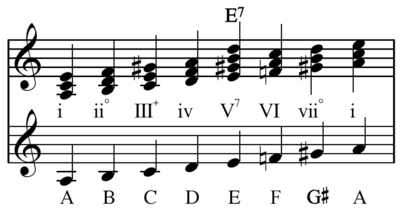 Chords on degrees other than V may also include the raised seventh degree in minor keys, such as the diminished triad on VII itself (viio); and also the augmented triad on III (iii+), which is not found in any "natural" harmony (that is, harmony that is derived from harmonizing the seven western modes, which include "major" and "minor"). This augmented fifth chord (♯5 chord) played a part in the development of modern chromaticism.

The inversions of an augmented triad introduce no intervals (allowing for enharmonic equivalents) that are absent from its root position. The first inversion is enharmonically equivalent to a new augmented triad in root position. For example, the triad E♭–G–B in first inversion is G–B–E♭, enharmonically equivalent to the augmented triad G–B–D♯. The same is true for the second inversion. One chord, with various spellings, may therefore have various harmonic functions in various keys, which introduces ambiguous tonality and opens the door to chromatic possibilities exploited by J. S. Bach, for example, and of course by many later composers. A similar analysis applies to the diminished seventh chord, founded on the diminished triad on VII in minor keys and ambiguous for the same reasons as the augmented triad.

While it evolved primarily as a basis for chords, the harmonic minor with its augmented second is sometimes used melodically. Instances can be found in Mozart, Beethoven (for example, the finale of the string quartet Op. 131), and Schubert (for example, in movement 1 of String Quartet 14, "Death and the Maiden"). In this role it is used descending far more commonly than ascending.

The harmonic minor is also occasionally referred to as the Mohammedan scale[3] as its upper tetrachord corresponds to the Hijaz jins, commonly found in Middle Eastern music. The harmonic minor scale as a whole is called Nahawand-Hijaz[4] in Arabic nomenclature, and as Bûselik Hicaz[5] in Turkish nomenclature. And as an Indian raga it is called Kirwani.

The Hungarian minor scale is similar to the harmonic minor scale but with a raised fourth degree. This scale is sometimes also referred to as "Gypsy Run", or alternatively "Egyptian Minor Scale", as mentioned by jazz legend Miles Davis who describes it in his autobiography as "something that I'd learned at Juilliard".[6]

In popular music, examples of songs in harmonic minor include "Easy Please Me" by Katy B and "Clair" by Gilbert O'Sullivan, which are pop songs, in rare instances, written in pure harmonic minor.

While the descending is:

Composers have not been consistent in using these in ascending and descending melodies. Just as often, composers choose one form or the other based on whether one of the two notes is part of the most recent chord (the prevailing harmony). Particularly, to use the triad of the relative major—which is very common—since this is based on the third degree of the minor scale, the raised seventh degree would cause an augmented triad. Composers thus frequently require the lowered seventh degree found in the natural minor. In jazz, the descending aeolian is usually disregarded altogether.

Examples of the use of melodic minor in rock and popular music include Elton John's Sorry Seems To Be The Hardest Word, which makes, "a nod to the common practice ... by the use of F♯ [the leading-tone in G minor] as the penultimate note of the final cadence."[7] 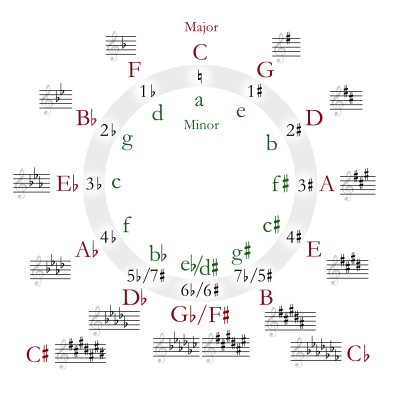 Circle of fifths showing major and minor keys and their signatures

Music may be written in an enharmonic scale (e.g., C♯ minor, which only has four sharps in its key signature, compared to the theoretical eight flats required for D♭ minor). The following are enharmonic equivalents:

Double sharps and double flats are written as accidentals, but not as part of a key signature. For example:

(the B is now double flatted and therefore, notated after the single accidentals, which obviously do not include the B♭)