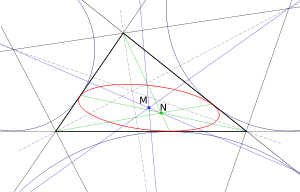 In geometry, the Mandart inellipse of a triangle is an ellipse inscribed within the triangle, tangent to its sides at the contact points of its excircles (which are also the vertices of the extouch triangle and the endpoints of the splitters).[1] The Mandart inellipse is named after H. Mandart, who studied it in two papers published in the late 19th century.[2][3]

where a, b, and c are sides of the given triangle.