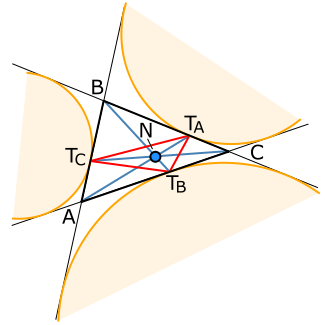 The Nagel point (blue, N) of a triangle (black). The red triangle is the extouch triangle, and the orange circles are the excircles. The splitters of the perimeter are ATA, BTB, and CTC.

In plane geometry, a splitter is a line segment through one of the vertices of a triangle (that is, a cevian) that bisects the perimeter of the triangle.[1][2]

The three splitters concur at the Nagel point of the triangle,[1] which is also called its splitting center.[2]