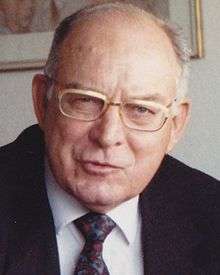 Manfred Robert Schroeder (12 July 1926 – 28 December 2009) was a German physicist, most known for his contributions to acoustics and computer graphics. He wrote three books and published over 150 articles in his field.[1][2]

Born in Ahlen, he studied at the University of Göttingen (1947–52), earning a vordiplom in mathematics (1951) and Dr. rer. nat. (1954) in physics. His thesis showed how small regular cavities in concert halls cause unfortunate resonances.

He joined the technical staff at Bell Labs in New Jersey (1954-) researching speech and graphics, securing forty-five patents. With Bishnu Atal he was a promotor of linear predictive coding (1967). Still affiliated with Bell, he rejoined University of Göttingen as Universitätsprofessor Physik (1969) becoming professor emeritus (1991). [3]

With B.S. Atal he developed code excited linear prediction (1985). With Ning Xiang he was a promoter of a synchronous dual channel measurement method using reciprocal maximum-length sequences (2003). He led a famed study of 22 concert halls worldwide, leading to a comparison method requiring no travel. He was a visiting professor at University of Tokyo (1979).