For other uses, see Manifesto (disambiguation).

A manifesto is a published verbal declaration of the intentions, motives, or views of the issuer, be it an individual, group, political party or government.[1][2][3][4] A manifesto usually accepts a previously published opinion or public consensus and/or promotes a new idea with prescriptive notions for carrying out changes the author believes should be made. It often is political or artistic in nature, but may present an individual's life stance. Manifestos relating to religious belief are generally referred to as creeds.

It is derived from the Italian word manifesto, itself derived from the Latin manifestum, meaning clear or conspicuous. Its first recorded use in English is from 1620, in Nathaniel Brent's translation of Paolo Sarpi's History of the Council of Trent: "To this citation he made answer by a Manifesto" (p. 102). Similarly, "They were so farre surprised with his Manifesto, that they would never suffer it to be published" (p. 103)[5] 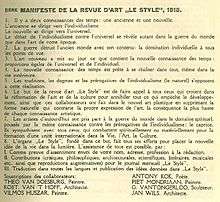 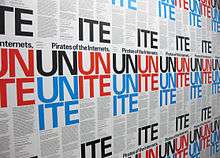