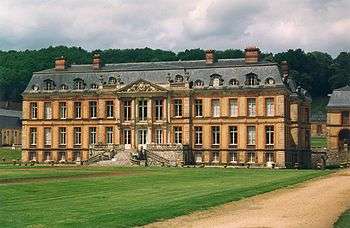 A mansard roof on the Château de Dampierre, by Jules Hardouin-Mansart, great-nephew of François Mansart

A mansard or mansard roof (also called a French roof or curb roof) is a four-sided gambrel-style hip roof characterized by two slopes on each of its sides with the lower slope, punctured by dormer windows, at a steeper angle than the upper.[1][2][3] The steep roof with windows creates an additional floor of habitable space[4] (a garret), and reduces the overall height of the roof for a given number of habitable stories. The upper slope of the roof may not be visible from street level when viewed from close proximity to the building.

The earliest known example of a mansard roof is credited to Pierre Lescot on part of the Louvre built around 1550. This roof design was popularized in the early 17th century by François Mansart (1598–1666), an accomplished architect of the French Baroque period.[5] It became especially fashionable during the Second French Empire (1852–1870) of Napoléon III.[6] Mansard in Europe also means the attic (garret) space itself, not just the roof shape[7] and is often used in Europe to mean a gambrel roof. Two distinct traits of the mansard roof – steep sides and a double pitch – sometimes lead to it being confused with other roof types. Since the upper slope of a mansard roof is rarely visible from the ground, a conventional single-plane roof with steep sides may be misidentified as a mansard roof. The gambrel roof style, commonly seen in barns in North America, is a close cousin of the mansard. Both mansard and gambrel roofs fall under the general classification of "curb roofs" (a pitched roof that slopes away from the ridge in two successive planes).[8] However, the mansard is a curb hip roof, with slopes on all sides of the building, and the gambrel is a curb gable roof, with slopes on only two sides. (The curb is a horizontal, heavy timber directly under the intersection of the two roof surfaces.) French roof is often used as a synonym for a mansard but is also defined as an American variation[9] of a mansard with the lower pitches nearly vertical and larger in proportion to the upper pitches.[10][11]

A significant difference between the two, for snow loading and water drainage, is that, when seen from above, Gambrel roofs culminate in a long, sharp point at the main roof beam, whereas mansard roofs always form a low-pitched roof.

In France and Germany, no distinction is made between gambrels and mansards – they are both called "mansards". In the French language, mansarde can be a term for the style of roof, or for the garret living space, or attic, directly within it.[12]

A cross-sectional diagram of a timber-framed Mansard roof; each of its four faces has the same profile.

The mansard style makes maximum use of the interior space of the attic and offers a simple way to add one or more storeys to an existing (or new) building without necessarily requiring any masonry.[13][14] Often the decorative potential of the Mansard is exploited through the use of convex or concave curvature and with elaborate dormer window surrounds.

One frequently seen explanation for the popularity of the mansard style is that it served to shelter its owners against taxes as well as rain. One such example of this claim, from the 1914 book, How to Make a Country Place, reads, "Monsieur Mansard is said to have circumvented that senseless window tax of France by adapting the windowed roof that bears his name." This is improbable in many respects: Mansart was a profligate spender of his clients' money, and while a French window tax did exist, it was enacted in 1798, 132 years after Mansart's death, and did not exempt mansard windows.[15][16][17]

Later examples suggest that either French or American buildings were taxed by their height (or number of storeys) to the base of the roof, or that mansards were used to bypass zoning restrictions.[18][19] This last explanation is the nearest to the truth: a Parisian law had been in place since 1783, restricting the heights of buildings to 20 metres (65 feet).[20] The height was only measured up to the cornice line, making any living space contained in a mansard roof exempt.[21] A 1902 revision of the law permitted building three or even four stories within such a roof.[22] 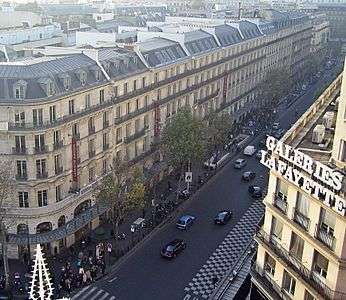 Mansard rooftops along Boulevard Haussmann in Paris constructed during the Second French Empire.

The style was popularized in France by architect François Mansart (1598–1666). Although he was not the inventor of the style, his extensive and prominent use of it in his designs gave rise to the term "mansard roof", an adulteration of his name.[15] The design tradition was continued by numerous architects, including Jules Hardouin-Mansart, (1675–1683), his great nephew, who is responsible for Château de Dampierre in Dampierre-en-Yvelines.

The mansard roof became popular once again during Haussmann's renovation of Paris beginning in the 1850s, in an architectural movement known as "Second Empire style".

Second Empire influence spread throughout the world, frequently adopted for large civic structures such as government administration buildings and city halls, as well as hotels and railway stations. In the United States and Canada, and especially in New England, the Second Empire influence spread to family residences and mansions, often corrupted with Italianate and Gothic Revival elements. A mansard-topped tower became a popular element incorporated into many designs, such as Main Building (Vassar College), Poughkeepsie, New York, which shows a large mansard-roofed structure with two towers.[23][24][25][26] 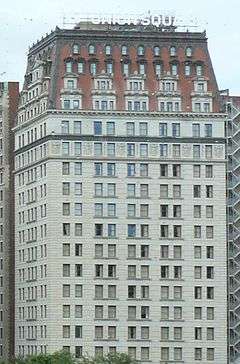 The 1916 Zoning Resolution adopted by New York City promoted the use of mansard roofs; rules requiring the use of setbacks on tall buildings were conducive to the mansard design.[28][29]

In the late-1960s and 1970s, commercial builders became interested in postmodern stylistic elements and adapted the mansard for new residential housing and apartment buildings in many areas of the United States. The outward appearance of a mansard roof has also been adapted as a façade on numerous small commercial buildings. These are not true mansard roofs in most cases; they are actually flat roofs and the sloped façade provides a way to conceal heating, ventilation and air conditioning equipment from persons at ground level.