Margaret Cross Norton (July 7, 1891 – May 21, 1984)[1] served as the first State Archivist of Illinois from 1922 to 1957 and co-founded the Society of American Archivists in 1936, where she served as the first vice president from 1936–1937 and president from 1943-1945. She also served as editor of the American Archivist from 1946-1949. Norton was recently recognized in the December 1999 American Libraries article naming "100 of the most important leaders we had in the 20th century" for her influence and forward-thinking for the future direction and scope of the archival industry.[2]

Norton promoted the establishment of archives as a profession separate from history or library science and developed the American archival tradition to emphasize an administrator/archivist rather than an historian/archivist. She encouraged learning through experimentation, practical usage, and community discussion.[3] While editor of The American Archivist she emphasized technical rather than scholarly issues, believing that these issues were more pertinent to the daily issues an archivist faced.[4]

By stressing the legal authority of government records, Norton believed archives could gain funding and government support through educating potential users about the legal protection records could provide them. Her influence and writings within the field of archives remain, for the large part, unchallenged.[5]

Margaret Cross Norton was born into a household where civil service and record keeping were of the utmost importance. At the time of their marriage Norton's mother was the Deputy County Treasurer for Winnebago County, Illinois and her father held the position of Deputy County Clerk.[6] Her parents' work impressed upon her the necessity of record keeping in the public sphere. Her parents frequently discussed their work with her and her father brought her into work with him often. Between both of her parents' professions, the use and preservation of official governmental records became common everyday notions, which undoubtedly influenced Margaret greatly at a very young age.[7] 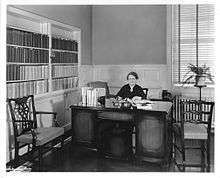 After graduating from high school, Norton obtained her bachelor's degree in History from the University of Chicago in 1913 and continued on at the University of Chicago to graduate in 1914 with a master's degree in the same discipline.[8] Limited to the professional careers that were acceptable for women at the time, Norton saw librarianship as her only suitable option and subsequently enrolled in the Library Science program at the University at Albany, SUNY in Albany, New York. She graduated in 1915 with a Bachelor of Library Science degree. She then began her first professional position at Vassar College in Poughkeepsie, New York. However, Norton soon developed doubts regarding her current profession, finding it too dry and rigid for her own taste and quickly began to seek refuge in the field of historical librarianship.[9] 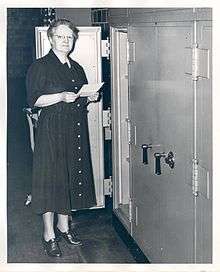 During this pivotal point of flux within her professional life Norton attended an American Historical Association lecture presented by Waldo Gifford Leland. In his lecture Leland distinguished between historical manuscripts and archives; highlighting the importance of and the need for a government archive center. Greatly inspired by this lecture, Norton quickly and immediately resolved to become an archivist.[10]

With her newfound resolve and professional goal in mind, Norton left her work in the library and began work calendaring manuscript collections at the Indiana State Library Department of Archives and History. From there she went into a two-year fellowship at the University of Chicago.[11]The completion of her fellowship led her into a cataloguer position at the Missouri State Historical Society in Columbia. While working as a cataloguer, Norton was asked to become the first head archivist at the new Illinois State Archives in Springfield, Illinois. Hesitant at first, Norton finally accepted the position in January 1922 and subsequently began in April 1922. At the time she was just 30 years old.[12]

When Norton began as the Illinois State Archivist, the archive center was minute in comparison to the large and vast historical center that the state of Illinois had in place and was one of three parts of the Illinois State Library, with each division head reporting directly to the Secretary of State.[13] Because of this it was extremely difficult for her to gain the funding necessary to run the archive center productively. In order to gain funding Norton felt that she needed to provide evidence that proved to the state policy makers the importance of public archives and their legal implications; she found that in order to gain funding, she would have to show how archives could benefit the state on a social and legal level.[14] Rather than speaking of their intrinsic value, Norton avidly promoted the instrumental value of archives. It was this pragmatic approach and developing theory of practicality that allowed Norton to gain funding and to distinguish the archival center from both the library and the historical society.[15]

"One might conclude from the report that the ideal archivist is a scholar sitting in a remote ivory tower safeguarding records of interest only to the historian. In reality the archivist is at the very heart of his government and the archival establishment is a vital cog in its governmental machinery. Archives are legal records the loss of which might cause serious loss to citizens or the government."[16]

One of the big breaks for the Illinois State Archives came when Norton discovered paperwork that provided proof of Illinois' land ownership. With the Illinois State Archives considered a subdivision of the public library, Norton was provided with no additional support or clerical staff and often found herself combing through the refuges of state buildings. On one venture she found a governor's letter book from 1823 which gave evidence that a "Post and Paul survey"[17] of the Illinois and Michigan canal had been done and that the map had been forwarded to the federal government. This find, by clarifying land ownership, quite possibly saved the state large amounts of money that could have been spent on ensuing court fees.[18] This find also gave Norton some of the repertoire and evidence needed to convince her superiors of the utilitarian value of archives.[19]

Through years of persistence, written correspondence, and positive utilistic publicity Norton finally gained the funding necessary to build a new state archives center for Illinois. Construction began in 1936 and the building's doors opened in 1938. The building was designed and built upon Margaret Norton Cross' specifications.[20] At this time the Illinois State Archive building was only the third public archives building in the United States.[21] Through her advocacy and theory the Illinois State Archives has become one of the premier archival institutional models.

In addition to giving the field of archives its distinct role separate from that of historical manuscripts and librarianship, Norton was also a pioneer woman of her time. She believed in and upheld the solidarity of her own thought and practices and in turn, was one of the first females to hold many of her professional titles.[22] 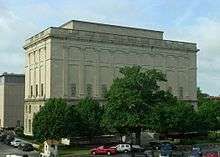 Norton retired in 1957. After retirement she made every effort to limit her influence and weight in the workings of the Illinois State Archives. She felt that she had contributed all she could and that it was time that the new leaders take over. She also mentioned that she much preferred to walk by the lake and watch the bunnies.[23] When she died at the age of 92 she left all of her personal holdings to the SAA. Upon the SAA's examination of her house they discovered a framed picture of the Illinois State Archives Building on her bedside nightstand.[24]